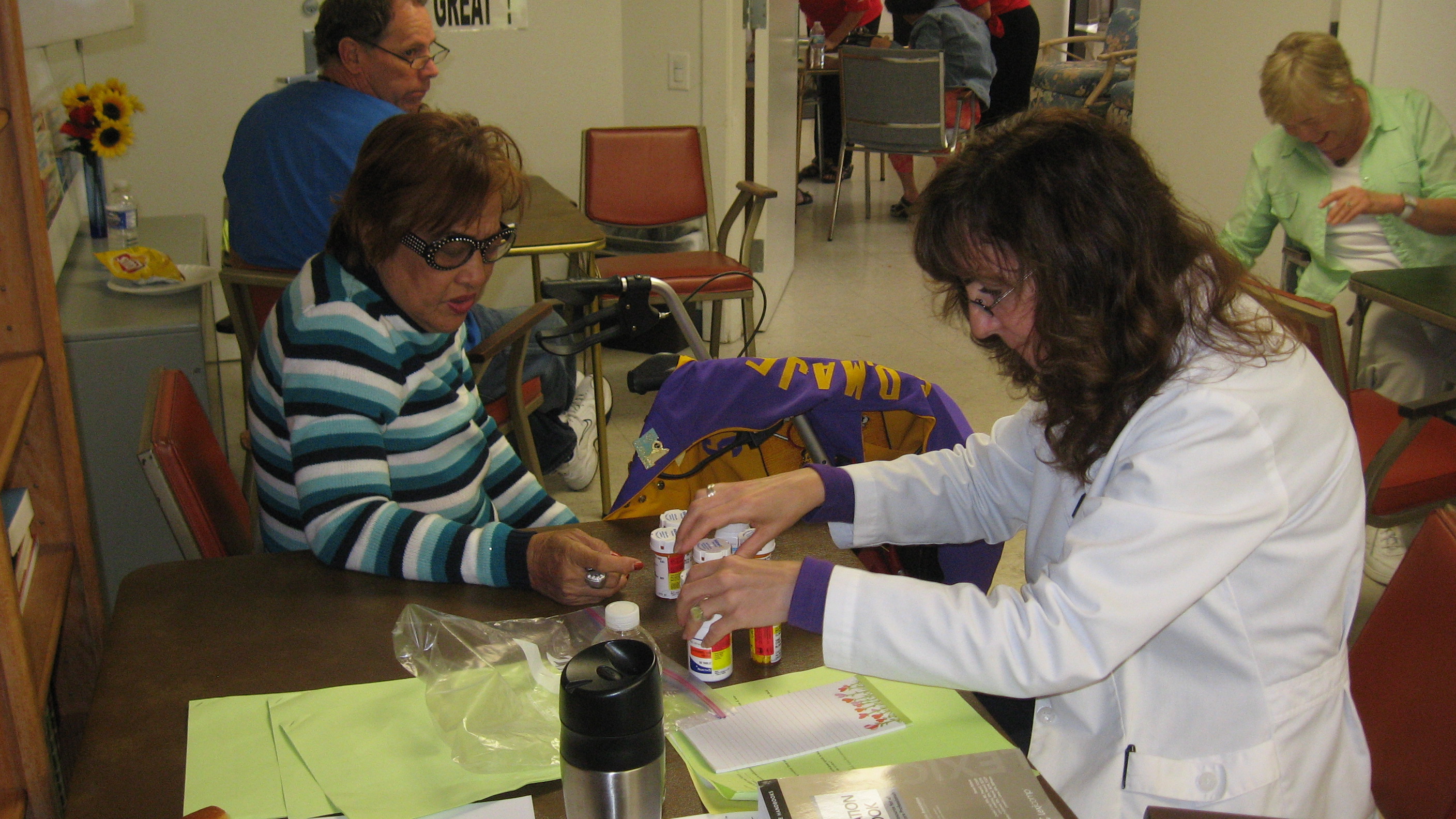 Some fill up Ziploc bags, others stuff carryall bags. Still others use big plastic boxes.

For years, California seniors have been toting their pharmaceuticals into “Meet the Pharmacist” events for one-on-one help with their daily medicine regimens. The events offer seniors a chance to sit down with a pharmacist and get free advice outside the sometimes busy, sterile pharmacy setting.

Demand for the events is on the rise, organizers say, as the state continues to struggle with a sluggish economy, high unemployment rate and budget cuts. Nearly $2 billion in pending slashes to Medi-Cal could put low income residents, including seniors, at further risk. The cuts call for increases in patient co-payments for doctors’ visits and caps on doctors’ visits each year.

These cuts could put patients with complicated medical issues and medication regimens “in a bind,” said Maxine Fischer, manager of state operations for AARP, which helps organize the events.

As people are living longer, the number of chronic illnesses such as asthma, depression and congestive heart failure, have increased, said Stephen Shortell, Dean of the School of Public Health at UC Berkeley. What’s also risen is the number of daily medications people are taking.

“Many have 10, 15, 20 medications they take at different times of day,” he said. “It’s become a huge new public health challenge.”

As a result, pharmacists have taken on a more important role in people’s lives, Shortell said.

Too often, people decide to not take their prescribed medications after learning the cost or after becoming sick, Fischer said. Some don’t take their medications at all. Language barriers can also add to the confusion. A quarter of adults aged 65 and older skip doses of medication or don’t fill prescriptions because of the costs, Fischer said.

The events, which are organized by a network of groups focused on senior-related issues, offer participants a chance to ask vital questions and review their medicines in familiar, neighborhood settings. Over the years, the events have caught on and been repeated around the state, including in Los Angeles, San Francisco and Fresno, Fischer said.

At a Meet the Pharmacist event in south San Diego County late last month, in walked Letty Santos Bustria, 72, pushing a walker and clutching a plastic bag full of prescriptions.

Bustria, a spunky, outgoing Filipino-American who wears pink rhinestone studded eyeglasses, said she suffers from diabetes, hypertension and gout. She survived a heart attack and triple bypass surgery six years ago and now lives in a National City senior housing facility near where the event was held.

Bustria is enrolled in both Medi-Cal and Medicare. She said she came to the event, held at National City’s Kimball Senior Center, to talk with a pharmacist and make sure her seven daily medications were “OK.” Sometimes she goes to pick up her refills. Other times, she has her son or a friend get them.

Volunteer Michelle Bautista, who works as pharmacy manager at a Walgreens in Chula Vista, said that at busier pharmacies patients may feel “like they don’t want to take a pharmacists’ time.”

“A lot of the patients are intimidated,” she said.

In addition to the sit-downs with pharmacists, the event offered presentations on fall prevention and wise use of medications. Vision, depression and blood pressure screenings were also available. Participants got free food and reusable shopping bags full of fliers and other goodies.

National City’s senior services coordinator Maria Wright said she’s seen an overall jump in demand for free services for seniors. Attendance at the Meet the Pharmacist events in her city rose from 100 to about 300 people over the past three years, she said. This year, about 160 participants attended the event, but Wright and others attribute the lower number to less publicity. If more knew about it, more would have been there, she said.

And while seniors like Bustria got the all clear on her medicines, Judy Gunn, of Bonita, got some tips on her daily medicine regimen.

Gunn, who declined to give her age, said she takes 12 daily medications for three chronic conditions. A pharmacist suggested that she take one of her over-the-counter medicines—Citracal—both in the morning and at night. He also recommended that she speak with her doctor about reducing a cholesterol medication.

“I’d been having sore muscles but I thought it was a side thing from the condition,” she said. The advice “will be helpful.”