In 100 blocks, a history of violent crime in Oakland 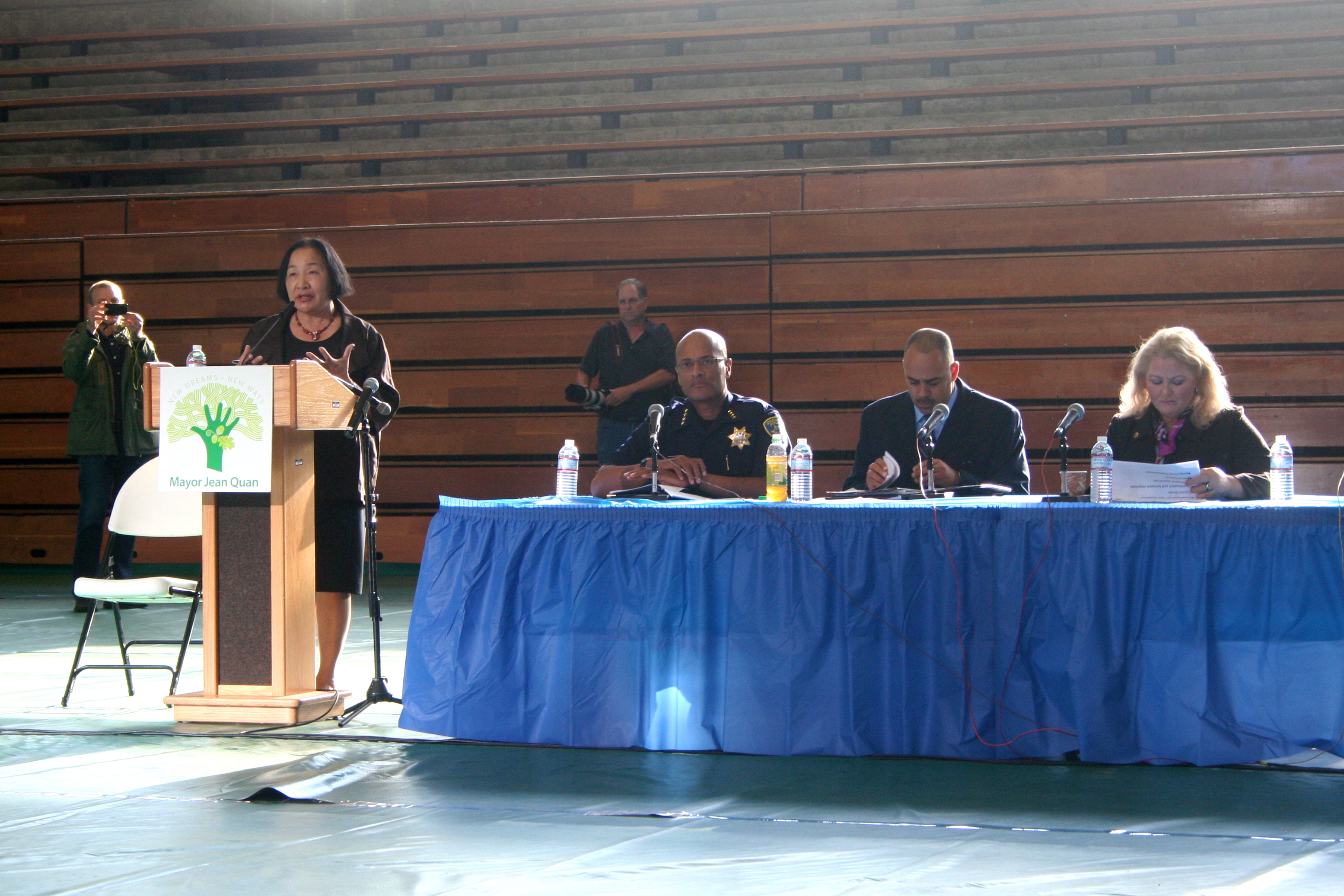 A crowd of residents gathered at a local college to hear Oakland’s leaders share details of the city’s plan to reduce crime, just a few days after Oakland’s well-liked police chief abruptly resigned.

The loss of Chief Anthony Batts wasn’t the only reason for the sense of urgency that surrounded the community meeting. Rates of violent crime in Alameda County are significantly higher than state and national rates. Most of the crime in the county occurs in Oakland, including homicides, which have averaged about 100 per year for the past decade. Recent incidents, like the daylight killing of a 3-year-old boy caught in crossfire in an East Oakland grocery store, have been particularly heartbreaking.

Batts wanted to try new tactics in the city, including gang injunctions and youth curfews. He resigned the week that new gang injunctions were sidelined by the city council in a tie vote that was broken by Mayor Jean Quan, though he declined to name that vote as the specific reason for his departure.

“We need to stop the city for a minute and have an honest conversation about what works and what doesn’t work for the city of Oakland,” Batts said at a press conference following his resignation. The Neighborhood Safety Summit where the crime reduction plan would be discussed, he said, was a way to start that open exchange with the public.

The public came in droves: The Mayor’s office estimates that more than 1,000 residents attended the neighborhood safety summit, which took place on October 15. The gym at Laney College, which hosted the event, was standing room only. Organizers scrambled to unfold more bleachers to accommodate the crowd as the panel, which included Mayor Quan, Alameda County Probation Chief David Muhammad and Alameda County District Attorney Nancy O’Malley, started their presentation.

“Two murders per week, that is where we are now, and it’s mostly young men of color,” Quan said as her PowerPoint outline of the city’s Comprehensive Safety Plan began unfolding on a small projection screen. Homicides had actually been decreasing in the city since 2006, she noted, adding that levels of crime remained unacceptable.

Ninety percent of Oakland’s shootings and homicides have happened in the same 100 blocks in East and West Oakland over the past 10 years, Quan noted. “If we change that, we change the story of violence in Oakland,” the mayor said.

Her strategy, she said, would be data-driven and based on best practices including crime prevention programs like Ceasefire, an intervention and enforcement program that focused on the people most likely to commit violent crime, CompStat, where police use data to make tactical decisions, and gang reduction programs modeled after those in Los Angeles. These strategies, along with the collaboration of her co-panelists and city residents, could turn the city around, Quan said.

Her optimism was at times in stark contrast to the mood of the room, and Quan had to ask hecklers in the crowd to let her talk during her presentation. Oakland, she noted, is a contentious city – a source of pride to the audience, which clapped at Quan’s affectionate characterization.

The frustration, however, spilled over in one of the workshops that followed the presentation. A small group of Oakland residents gathered for the gun violence workshop, one of 25 group discussions of subjects ranging from the sexual exploitation of minors to community relationships with the police.

Participants seemed wearied by the shootings and the killings.

The number of homicides in Oakland is expected to top 100 this year, and the rate of shootings that don’t result in death is also high, noted Sgt. Tony Jones of the Oakland Police Department’s Major Crimes Unit, who facilitated the meeting.

“For every homicide we have, we have five to six shootings where people live,” Jones said. The shot spotter system, which notifies police when shots are fired, can be activated up to 60 times a night, he added.

“It is clearly not working,” Jones said of Oakland’s strategy to keep gun violence in check. “Too many people are getting shot. We are clearly failing.”

Jones asked for suggestions from participants, a request that prompted ideas like more police walking the beat, encoding bullets with tracers that would allow law enforcement to follow them back to their place of purchase, and searching cars for guns as they crossed state borders into California.

The most contentious suggestion was for checkpoints where cars in the 100 blocks would be randomly searched for guns, which prompted heated support and disagreement.

“We have to do something,” Williams said. “Some rights have to be given up if we want our children to live.”

“I don’t want to have two different sets of rights,” countered East Oakland resident Demitria Huntsman. “I don’t want to be under a different constitution because I live in a violent city without enough resources.”

Councilwoman Jane Brunner joined the discussion about halfway through and remained until the end of the workshop. Recent interviews she conducted with police, she said, suggest crime reduction teams deployed to hot spots could help.

“How do you know that will work?” asked Oakland resident Nancy Robinson. “It should go from data,” Brunner replied, emphasizing the need for an approach that has been tested and evaluated.

Data-driven responses and best practices are popular catchphrases in discussions of violence prevention, but fully realizing such programs is a long and complicated process, one that requires sustained commitment – a level of commitment that has been difficult for cash-strapped Oakland to stick with in the past.

For instance, Operation Ceasefire, one of the programs cited by Quan as a best practice was deemed a success in Chicago and called a critical part of the “Boston miracle” after helping to drive down youth homicide rates there in the 1990s. Oakland has a version of the program, funded by Measure Y, a parcel tax approved by voter initiative in 2004 and augmented by grants from state and federal agencies.

Ceasefire combines prevention and enforcement by taking a “carrot and stick” approach. The process begins with police identifying people at risk for shooting or being shot and arranges a call-in, a meeting where they are offered an array of services, like help with job placement and healthcare, in exchange for giving up their life of crime – that’s the carrot. They are also warned that if they don’t straighten up, law enforcement will come down on them hard – the stick.

Yet, as Ceasefire creator David Kennedy recently noted at a talk in Oakland, Ceasefire isn’t effective when implemented halfway – the program must be the center of police and community anti-violence work. Boston moved away from Ceasefire, he said, and rates of violent crime in the city rose once again.

A recent evaluation of Ceasefire in Oakland suggests that the program hasn’t been the center of the city’s approach. It has been challenged by conflicting policy goals and funding problems, according to a report (posted here by KALW’s The Informant) earlier this year from the California Emergency Management Agency.

Funds from the city to Ceasefire were interrupted when the number of Oakland police dropped below levels required by the ballot measure. Measure Y funds were restored by another ballot initiative, but only after a four-month period of “limbo,” the report noted, adding the reduction of the police force also hurt the call-in efforts.

The call-in was further complicated by the two gang injunctions that did go into effect in Oakland, the report said. The injunctions, civil restraining orders that subjected alleged gang members to restrictions like nighttime curfews, were issued in the areas where Ceasefire was doing call-ins. Rumors spread that the call-ins were identifying gang members for the injunction and that “created serious trust issues” for Ceasefire staff, according to the CEMA report.

And Ceasefire was just one of the very ambitious projects mentioned by Quan at the neighborhood safety summit. The Harlem Children’s Zone, a New York City based program pioneered by Geoffrey Canada that provides programming for children and their families from birth to college, and relies on significant private funds (for more than 66 percent of their $67 million budget), was also cited as a model. Quan referred too to gang reduction programs in Los Angeles, the city where Jesuit priest Greg Boyle has nurtured the famed gang prevention program Homeboy Industries since 1988.

A flood of guns, a reign of bullets

At the gun violence workshop, in contrast to the hopeful mentions of best practices, Sgt. Jones more than once called attention to the limits of local strategies to end violence – especially in light of lax federal gun control laws that allow weapons to pour into the city.

Jones described what he called a typical scenario for guns getting into Oakland: a man takes his girlfriend, who has no criminal record, to Utah. They settle in for a few days, the girlfriend gets a driver’s license, and goes to a gun shop where she buys several guns for $300. They then return to Oakland, where the guns are sold on the street for $1,500 apiece.

“How can we stop that?” Jones asked the group gathered in the small Laney College classroom.

There must be a solution, because the police can solve crimes when they are motivated to do so, countered resident Johnny Williams, recalling the quick arrest in the murder of the 3-year-old East Oakland boy.

“The hot spots have been the same in Oakland for the past 20 or 30 years,” said Joanna Habi, director of Soldiers Against Violence Everywhere, a grassroots, Oakland-based effort to end street violence. “Why isn’t there change happening?”

“We aren’t being as effective as we need to be,” Sgt. Jones said.

Just hours after the summit, three more men were shot and killed in Oakland.

Mayor Quan is expected to present her Comprehensive Safety Plan for Oakland to the city council in the coming weeks.

In 100 blocks, a history of violent crime in Oakland