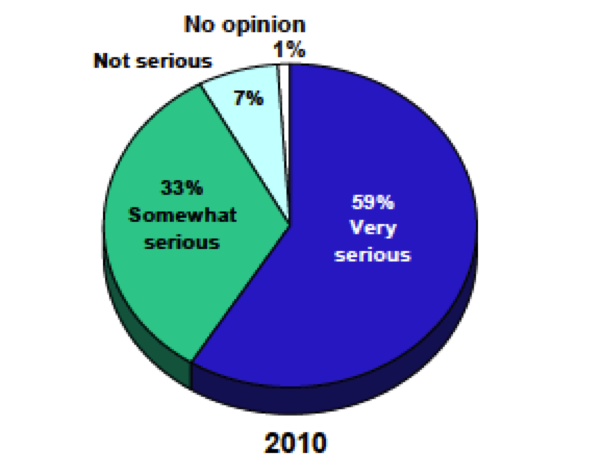 Increasing numbers of Californians believe that unhealthy eating habits and the lack of physical activity are major problems for California’s children, according to a new, independent poll by the Field Research Corporation.

The survey, taken late last year, found that 31 percent of California voters believe that unhealthy eating habits are the greatest health risk to kids today, while 15 percent cite a lack of physical activity. Combined, the two issues were cited by 46 percent of voters, up from 42 percent three years ago and 35 percent in 2003.

The next biggest risk — illegal drug use — was cited by 17 percent of voters, down from 27 percent in previous surveys.

Childhood obesity is considered a very serious problem by 59 percent of voters, up from 46 percent in 2003. African-Americans, women and people with incomes of less than $20,000 a year were most likely to consider obesity a “very serious” problem.

The poll of 1,005 English and Spanish speakers was conducted in October 2010 on behalf of The California Endowment, which was also the initial funder of calhealthreport.org. The statewide findings in the poll have margin of error of plus or minus 3.2 percentage points.

“Voters are saying that all California families deserve access to healthy, affordable foods and opportunities for physical activity,” Robert K. Ross M.D., president of the California Endowment, said in a statement released with the survey results. “They recognize the seriousness of the childhood obesity epidemic and understand that changing public policies is the key to creating healthier communities.”

Among the other findings in the poll:

–60 percent said the average California kid is less active than five years ago.

–47 percent said the foods eaten by the average kid are less healthy than five years ago; 18 percent said more healthy.

–Fewer people believe that childhood obesity is a community problem than seven years ago. In 2003, 53 percent said the entire community needed to address the problem. Today 48 percent say this, while 38 percent say it is a personal issue and 12 percent said both the individual and the community are responsible.

The most popular policies for promoting healthy eating and dealing with childhood obesity are requiring physical education throughout high school, requiring schools, gyms and playgrounds to be open after school hours, and requiring cities to make street improvements that make it easier for kids to bike and walk. More than half of all voters, about 56 percent, said they would support a special tax on soda and soft drinks to raise money to fight obesity among children.