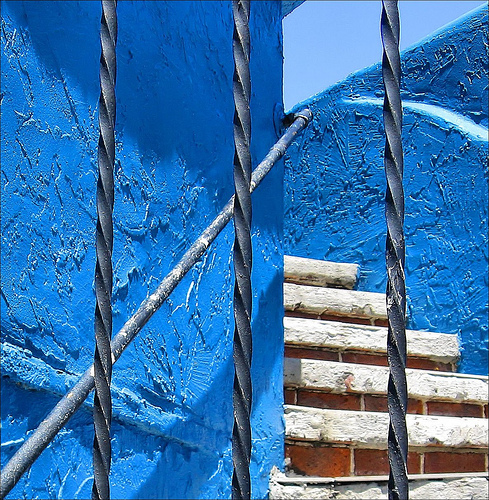 The Mid-City region of San Diego can feel a bit frenetic—a hurried avenue carries motorists, transit and pedestrians past a bevy of international restaurants and markets, most covered in bright paint, wrought iron and advertisements in multiple languages. But local artist Dominique Guillochon finds calm in this part of town with his camera lens. By framing just light and colors, he hushes the streets and finds beauty in the unassuming details. His work, including a minimalist series that feels contrary to the diverse area that inspired it, can be viewed on Flickr here.

Here is a transcript of Guillochon’s words from the video:

My name is Dominique Guillochon and I’ve been a full-time artist for four years, mostly by walking around my neighborhood and taking pictures of the light, the colors, the shapes. I was living in France for 23 years; because I like the English language, I always dreamed of either moving to England or to the United States. So I went to visit my friend in New York, crossed country by train to San Francisco and I didn’t want to leave at that point.

There’s one thing about California that I haven’t found anywhere else in the United States is the light. To give you an example, today you’ve got this blue sky, the sunlight is, like, really yellow, and some of those buildings are yellow, orange, pink—you know—light blue. So, it’s really attractive for a photographer to walk around. I come across black people, Mexicans, Vietnamese, Laotians and so it does inspire you to walk around and try to record that.