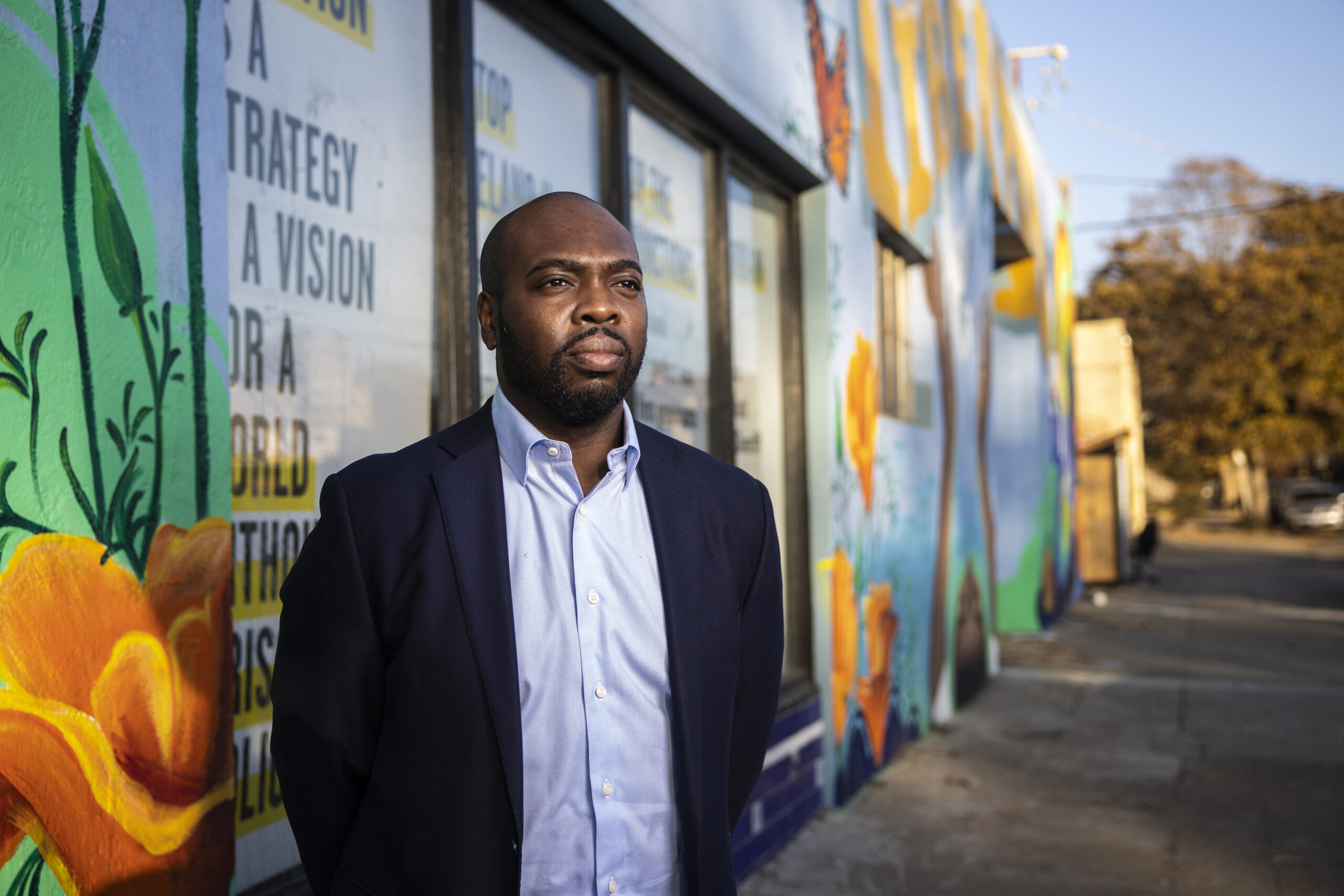 Organizations applying for the grants can expand their focus to create intervention programs for people who cause harm, said Marc Philpart, principal Coordinator of PolicyLink’s Alliance for Boys and Men of Color. Photo by Martin do Nascimento/Resolve Magazine.

Organizations applying for the grants can expand their focus to create intervention programs for people who cause harm, said Marc Philpart, principal Coordinator of PolicyLink’s Alliance for Boys and Men of Color. Photo by Martin do Nascimento/Resolve Magazine.

The last time Liz Zambrano’s ex-husband tried to hurt her, she knew she had to find a path to safety. As he threw household objects at her and her two sons — a computer, an iron — they fled to the bathroom, locking themselves inside. She was terrified to call the police, but even more afraid that her husband would hurt her children. So she dialed 911.

Zambrano, a Latina woman who is now 41, had called the cops once before on a previous partner. During that incident , which happened in 1998, the police had arrested her, not realizing that her partner’s scratch marks were from when Zambrano had tried to defend herself. The bumps and bruises on Zambrano’s head weren’t visible.

Zambrano worried that if she called the police again, she might be arrested a second time, or that her children might be placed in foster care.

Forty percent of domestic violence survivors never contact the police. Police intervention can often escalate the violence without disrupting the cycle of abuse, experts said. Survivors of color especially fear involving an institution that has often served to oppress them. Advocates, lawyers and law enforcement have recognized these shortfalls for decades. Yet the complex blend of injury and fatality risks combined with fraught politics around how best to prevent domestic violence has hindered local, state and federal efforts to test alternatives — even within the national push to divert resources from police budgets.

A sea change may be coming. In October, Gov. Gavin Newsom signed a bill that will fund pilot projects that provide alternative responses to emergency situations, including domestic violence intervention. While cities and jurisdictions have launched similar efforts, California is the first state to support such experiments at scale.

“It’s the biggest investment in alternative responses that the state has ever seen,” said Cat Brooks, executive director of Justice Teams Network, who advocated for the bill.

Applications from California’s Department of Social Services will open in 2022 once the department establishes parameters of the program, and all grants will be awarded by January 2023. Organizations will receive grants of at least $250,000 over three years and are required to partner with a local government organization of their choosing to implement programs. Partner agencies can include health, mental health or social service providers, among others. Parameters are flexible so that groups can tailor their approaches for their communities: Some may focus on particular neighborhoods or hotspots, while others may serve specific racial and ethnic communities.

“We wanted to explore a variety of different approaches before trying to scale something across California’s 58 counties and 500 cities,” said Marc Philpart, principal Coordinator of PolicyLink’s Alliance for Boys and Men of Color, which was one of more than 10 organizations that sponsored the bill.

Supporters of the bill said they hope community organizations interested in applying for the funds will bring a range of voices to the table — which could include domestic violence survivors, people who have inflicted violence, health care providers, community-based activists, academics or law enforcement officials (some disagree on the extent of police involvement). Brooks said the process should involve asking survivors, “If you had a number that you could call besides law enforcement, what would you want it to look like, feel like, sound like?”

Aylaliyah Assefa, a domestic violence survivor who lives in Sacramento, said she wished she could have had access to someone equipped to navigate emotional trauma rather than interrogate her when she finally called the police during a fight with an abusive partner. Assefa recommended that first responders receive training on how to approach survivors of abuse so they can assess the people around them before launching into questioning.

“The first thing we want is a safe haven away from the hurt … not further criminalization on top of what we’ve been through,” she said.

Organizations applying for the grants will also have the opportunity to expand their focus to create intervention programs for people who cause harm, Philpart said.

“If you look at the domestic violence response system right now, it is exclusively focused on the person who is suffering harm. And that is important,” he said. “But I think we need another layer in order to really prevent, and address, and interrupt, cycles of violence.”

When Zambrano called law enforcement the second time, she didn’t get arrested and her kids weren’t taken away. But she wished the police could have done more for her. When they arrived and couldn’t get her ex-husband to leave their one-bedroom apartment, they suggested that Zambrano and her children leave for three days instead and file a protective order.

Zambrano and her sons packed their things for a few days, but the protective order took a month to be served. She had to take time off from work as she was shuffled between police stations and courts. Looking back, Zambrano would have wanted holistic support to help her navigate the process so she didn’t have to do it alone, she said.

She is now connected with Strength United, a trauma recovery center that she calls a “one-stop family justice center” for services, support and counseling. “I would have probably called them if I would have known about that,” she said.

Zambrano is vocal in her community about her experiences, and said she’s proud of the ways that she’s “trying to break the cycle [of domestic violence] within my family.”

“I use [my voice] …so that I could hopefully try to help people, help our community, let them know that they’re not alone,” she said.

‘Allow them to dream’

Some alternative approaches to addressing domestic violence already exist on a smaller scale. Experts said the state funding will allow organizations to expand their work.

“I’m really hopeful that groups who are interested in responding to 911 calls related to domestic violence, or intimate partner violence, will step up and really craft a proposal that will allow them to dream,” said California Senator Sydney K. Kamlager, lead author of the bill.

Prospective groups can look to organizations across the country tackling adjacent issues. Brooks, who also is a survivor of domestic violence, points to the MH First Programs launched by the Anti Police-Terror Project in Sacramento and Oakland in 2020, which has a phone hotline that responds to psychiatric emergencies, need for substance use support and other mental health crises during hours when other professionals aren’t available. The city of Eugene, Ore. has been operating a mobile crisis intervention program called Crisis Assistance Helping Out On The Streets (CAHOOTS) for roughly three decades. The city funds CAHOOTS through the Eugene Police Department, but the program is staffed by medics and mental health workers from a community health clinic, not law enforcement.  Police dispatch CAHOOTS teams to respond to non-emergency calls that require interventions such as crisis counseling, conflict resolution, referrals to resources and transportation to services.  However, they do not handle crimes in progress, violence or life-threatening emergencies.

Meanwhile, Aleese Moore-Orbih, executive director of the California Partnership to End Domestic Violence, points to the “Promotora de Salud” Model, in which community members are trained as peer or lay educators to share information about health equity and other issues. This approach has also been used to educate community members about domestic violence.

A pathway to safety

As pilot projects take off, policymakers will look for ways to measure their success. Metrics could include declines in arrests or officer-involved shootings, said Sen. Kamlager. They also involve changes that are harder to measure, such as, “Did a participant find a pathway to safety? Did violence re-occur? Did the participant get to determine their pathway?” Brooks added.

Success also means these programs will help survivors who otherwise might have tried to escape abuse on their own.

“When we start talking about alternative responses to police, people carve out intimate partner violence and say, ‘It’s too dangerous, too problematic. We have to keep sending police there, but we can send other people to other kinds of situations,’” said Leigh Goodmark, director of the Gender Violence Clinic at the University of Maryland Carey School of Law. But Goodmark argues that the current system isn’t protecting many survivors anyway, especially those who are people of color, and that the time has come to try something different.

It’s unreasonable for police to quickly and effectively judge which person is the victim or who is telling the truth, said Sen. Kamlager. Under California law, officers must identify and arrest the “primary aggressor” when both people show injury.

“We have placed so many issues on the shoulders of law enforcement: all of the things that we don’t quite understand, that have become too complicated for us to solve easily,” said Sen. Kamlager.“They have shown us repeatedly that they do not have the capacity to manage those issues.”

Some officers acknowledge the complexity of domestic violence cases and their limitations in addressing them. Abdul Pridgen, the San Leandro Police Department police chief, said police intervention cannot disrupt the cycle of abuse. He’s interested in alternative approaches that could mitigate issues that lead to violence, but said it’s “imperative that law enforcement partners are in the discussion early on.”

The way Brooks sees it, this California pilot could restore agency to people who have experienced violence. “My hope for survivors is that we won’t just be walking wounded, that we’ll actually get the help that we need for ourselves, our children, our partners,” she said.

She points out that new methods don’t mean the police are going away. If a survivor decides that calling 911 is her pathway to safety, she gets to decide.

“Survivors will have control over the path,” Brooks said.