Fight the Power: A Medical School for Aging 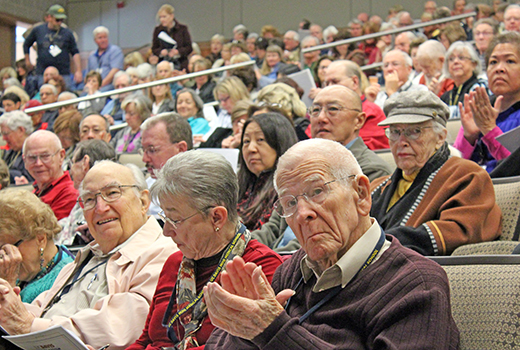 They both fought for their independence.

For seven years, Vincent has armed himself with the medical knowledge necessary to age with vigor by attending a progressive program offered annually at UC Davis – “Aging and Medical Science: A Mini Medical School to Prepare for Life’s Second Half.”

One of Vincent’s first lessons at the school was this: “Aging is largely a product of what you’ve given up.”

Which is why John Adams remains a cherished hero.

“You have to fight to retain what you are,” says Vincent, 93, who works out daily at the local gym.

For over a decade, the philosophy of the Mini Medical School — which anyone can attend — could even echo America’s revolutionary fervor: “Give me liberty, or give me death.”

Since its first class of 200 students in 2002, the school’s popularity has exploded. When registration opened in November for this year’s class, all 520 seats were filled within 90 minutes. Starting on Saturday morning, the school meets for six Saturdays, offering 12 classes of an hour each.

Its goal is to educate students on important health topics to keep themselves healthy, happy, and vital: “Pharmacology 101 for Seniors,” “Beating Osteoporosis,” “New Thinking About Heart Health, Blood Pressure and Cholesterol,” and “Nutrition: Does Anyone Know What to Believe Now?”

Students, most over 50, attend the school for a variety of reasons.

“Most of them certainly are coming for information for themselves, or their spouse,” says Dr. Michael McCloud, the school’s creator and course director.

Others are medical professionals like paramedics seeking to enhance their understanding of older adult health. One UC Davis student wanted to attend a four-year medical school, trying Mini Medical School first. And a married couple had already graduated three children from the university.

“This was their chance to be students on the campus,” McCloud says, smiling.

Karen Robison, a former nursing professor in Wisconsin, rattles off a comprehensive list of topics covered during her attendance in 2010.

“New developments in cardiac surgery in the placement of stents, intra-catheter placement of artificial and animal cardiac valves, cardiac symptoms women may ignore which can be serious and are different from those of men, eye problems common to aging adults and which symptoms are critical to report, the problems connected with drug interactions and dosages of meds in elders, Beer’s List and meds which are hazardous to elders regarding their balance,” says Robison. “And that’s just for starters.”

“Approximately half of the recommendations have either no evidence or are contradicted by the best available evidence,” concluded the report.

Instead, UC Davis brings in regional experts from geriatric medicine and other disciplines to provide current, evidence-based medicine to counteract pop TV pabulum.

The intellectual and emotional heart of the program is McCloud, a revered geriatrician and geriatric educator who has gained a reputation for imparting medical knowledge both intelligently and compassionately. He has also developed the university’s Internal Medicine Faculty Practice, and co-directs the university’s Geriatric Clinic.

One of the first lessons McCloud offers to students is that older adults are as unique as snowflakes.

“Human beings are aging at remarkably different rates,” he says. “We may have a very young kidney, a very old spleen.”

In fact, he says, it’s impossible to generalize about the demographic at all.

McCloud says the success of the school depends not only on course content, but delivery. Each year he and his advisory committee, which includes Vincent, have tweaked both the format and subject matter – sex, for example, wasn’t a popular classroom topic – and have found the “sweet spot” with 12 one-hour classes held over six consecutive Saturdays.

Classes are fast-paced, and often infused with humor or surprises.

To illuminate a class on sleep medicines, for example, one instructor busted out some MC Hammer dance moves. At another class, four government officials from a “medical board” arrived in suits to warn students they couldn’t provide medical advice or they’d face prosecution. The men were actually part of a local singing group.

Highly respected in both roles as a geriatrician and medical educator, McCloud believes that popular views on senior health are often misguided.

“Many older adults whose intellectual decline has been dismissed to the singular disease ‘Alzheimer’s have, in fact, a band of culprits contributing to accelerated brain aging,” he says. “Focusing more on dementia as a ‘syndrome’ than a disease keeps our eyes open to potentially treatable contributors…. My patients and families take great solace when I explain this.”

It’s ideas like these that also impress professionals and former students.

“Dr. McCloud is a rare gem today,” says Robison. “He is not an egoist nor an ‘M-Deity.’ He answers your questions without putting you down or making you feel stupid for asking.”

In 2001, the school first received a grant from the Pfizer pharmaceuticals for its original class of just 75 students.

“The phone rang off the hook,” recalls McCloud.

Since then the school has “graduated” more than 2,500 students – many of whom have taken the class more than once.

At the University of Hawaii Manoa, Virginia Hinshaw replicated the program following her tenure as provost and executive vice chancellor at UC Davis. Besides serving in the same department as McCloud, her father was also one of his patients.

While similar in structure, Hinshaw says the Hawaiian school is customized for a native audience, especially with its wide ethnic range of instructors.

And in a culture that already reveres elders with its Native Hawaiian and Asian influences, the school comes at a critical time.

“In less than a decade, Hawaii will have the highest proportion of people over 65 in the nation,” says Hinshaw.

A week ago, McCloud and three other presenters took the Davis school on a “roadshow” to the College of Marin at Kentfield with a one-day “Mini Medical School Sampler.” Hopes are that interest there will blossom into a larger program.

For the future, McCloud and his advisory committee continue to ponder an advanced course – Year Two.

“The school brings a critical missing piece to consumers,” says Robison. “Practical preventive practices to benefit the health of elders, humor about the aging process, and positive news about elders who are successful in careers, sports, politics, (and) judicial roles.”

Vincent, who has reduced his drug prescriptions from 15 to four, agrees.

“One of the things Mini Medical School has done is to vigorously defend how I define myself.”

Fight the Power: A Medical School for Aging