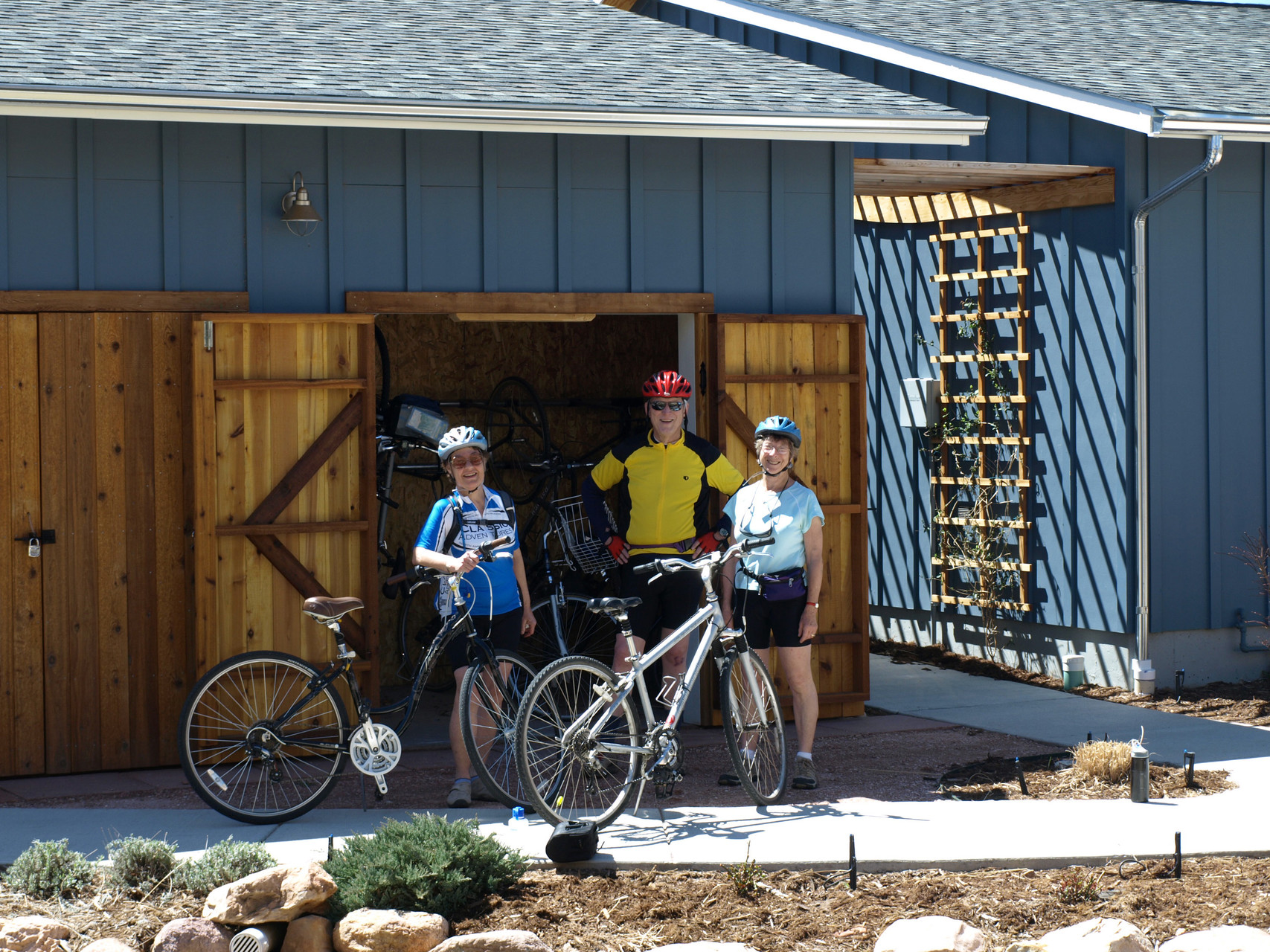 When 64 year-old Bob Branstrom thought he was having a stroke, he walked the few feet to his senior cohousing neighbor, who then called a nearby pediatrician, who then called 911. Together, his neighbors ensured his safety and comfort, even taking him books and toiletries if needed for an overnight hospital stay.

He checked out fine.

When Mike Contino and his wife suggest activities at the Wolf Creek Lodge Senior Cohousing facility, they have instant participation.

Located in Grass Valley an hour outside of Sacramento in the Sierra foothills, Wolf Creek Lodge defies the conventional wisdom that most adults prefer to “age in place” at homes they’ve lived in for decades.

Instead, senior cohousing blends older adults within a small housing development around a Common House for shared meals and social activities to combat the scourges of social isolation and depression frequently visited upon older adults.

Branstrom jettisoned his Oakland home after nearly 28 years to join.

“I was overwhelmed,” he says. “It was a three-bedroom house and a yard. So downsizing to move here was wonderful.”

With its neighborhood design, self-governing management philosophy and consensus decision-making, cohousing is very different for many Americans weaned on rugged individualism, and offers the antidotes of social engagement and belonging.

Durrett says that the American desire for independence is largely a façade, and that given the choice most seniors would prefer to live in communities like Wolf Creek.

He contrasts senior cohousing with the experience of his mother, who inhabited a traditional long-term care facility.

“The day she went into assisted living they treated her like a child,” he says. “My mother hated every minute she was there.”

Given the choice between such “institutional” living and remaining at home, older adults will almost always prefer to age in place.

Suzanne Marriott met Durrett and his architect wife Kathryn McCamant when the duo were offering a senior cohousing workshop.

“I fell in love with the concept as they presented it,” says 71 year-old Marriott, a widow. Once a month, Marriott drove the 150 miles from her Bay Area home in Castro Valley to the Grass Valley site still under development, and met with future tenants to decide its direction. “I thought it was a great way to make meaning in my life after (my husband’s) death, so I joined.”

And some traditional cohousing facilities – which typically focus on families – have attracted older residents.

“Santa Cruz, California is 100% seniors even though it didn’t start out to be,” he says.

Durrett laments that white-collar developers and academics with gerontology degrees typically wield authoritarian rule over housing developments for the elderly.

“We’ve let higher education dictate policy in this country,” says Durrett. “Why spend time on a marketing survey? Why don’t you just ask a bunch of seniors?”

At Wolf Creek, interested residents quickly joined one of the blossoming management teams: finance, marketing, membership, landscaping, or process (how meetings and other community events are managed).

“These residents came to the table and said ‘This is what we want,’” says Durrett.

The three-story Wolf Creek Lodge opened in fall, 2012. With 30 units and over 40 residents, it typifies the optimal cohousing community of 20 to 30 homes.

A consensus decision-making process is critical to senior cohousing, yet is often a challenge for Americans who survived Tom Wolfe’s 1970s “Me Decade” and today’s self-absorbed iEverything.

Besides two-hour monthly meetings, Wolf Creek also holds deeper Value Issue Discussions, or VIDs. Meeting twice a month to explore topics only touched upon in the monthly meeting, members vote using colored cards. Green means “agree.” Blue is “agree with slight reservations.” Orange stands for “agree with strong reservations.” And red cards mean “disagree.” Red cards block a proposal, but can only be used to speak for the greater community – not for personal reasons.

Senior cohousing was pioneered in Denmark, where Danes were frustrated with the lack of available housing options, and sought healthy alternatives. During a year there studying architecture, Durrett got to see cohousing up close.

Shared food, he discovered, was an essential ingredient.

“The Danes would say you don’t have cohousing without it,” he says. “Breaking bread is the most timeless means in which communities are stitched together.”

Common meals are indeed the keystone to American cohousing communities, and at Wolf Creek the older adults eat together at least three nights a week – sometimes five.

“I love cooking for the group,” says Branstrom.

Activities at Wolf Creek include morning coffee, Friday Movie Night, and frequent hiking. A pétanque court – similar to bocce – sits prominently in the middle of the outside courtyard. A local yoga class proved so popular the instructor now teaches on site Monday mornings, his class customized for older adults.

Yet the downside for many seniors: price. Senior cohousing is not “commune living,” with one area kept fiercely independent: resident income streams.

Although the condominium-like units are unaffordable for seniors on fixed incomes, Durrett says less expensive housing options are being considered to address the fast-approaching “silver tsunami.”

He cited three scenarios: some existing senior cohousing units are today being rented out; community features like spacious common areas are being added to affordable housing complexes; and more affordable units are being amortized within larger projects – in other words, large-scale housing funds the costs of affordable senior housing.

With age, the search for meaning and belonging continues, says Vicki Dotterer, 63, who has found it in within the communal walls of Wolf Creek.

“We all bring something unique to the community,” she says. “It’s just fertile ground for personal growth.”