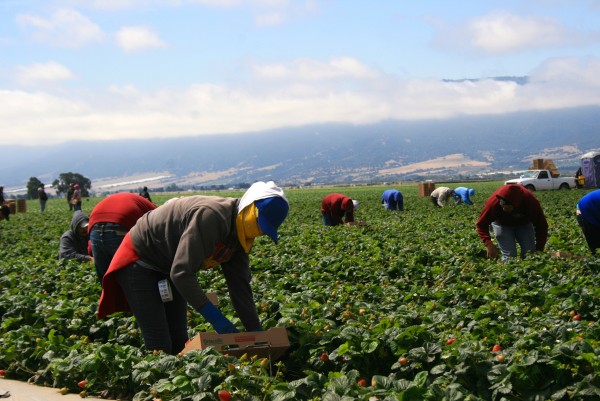 In the foothills of the Pajaro Valley, dozens of nursery workers dressed in jeans and work boots file into a warehouse. It’s just past lunchtime on a weekday. Normally the workers would be heading back to the white-tented greenhouses to tend to the broccoli, chard and kale shoots that grow from nursery flats, but today they are attending the final presentation of Speedling Incorporated’s Safety Week, a workshop on sexual harassment and assault.

“Today we are going to talk about a topic that is taboo in many cultures,” Maria Barranco says in Spanish. Barranco is the prevention program manager of Monarch Services, a domestic and sexual violence prevention agency in Santa Cruz County.

Most of the 45 employees in attendance are men, ranging in age from just barely adult to grizzled middle age. But several women sit among the group. Everyone is engaged, listening intently to Barranco and four prevention specialists—all dressed in matching black shirts with a “Campos Seguros” (Spanish for “safe fields”) logo on the front. On their backs, the shirts read “Lives free from violence and abuse.”

When Barranco asks, “Does anyone know what sexual harassment is?” several workers raise their hands. One man says, “It’s when you touch someone or talk to them in a way that makes them feel uncomfortable.”

This workshop is a field test of the format that Monarch’s Campos Seguros program is currently using to develop a nine-week series to educate agricultural workers about sexual violence prevention. The workshop series will pilot in the fall, and there will be separate programs for men, women and children.

Situated in a farming community, Monarch Services (formerly Women’s Crisis Support – Defensa de Mujeres) has had a long history of assisting farmworkers who are victims of sexual violence. But they began to focus more specifically on the issue in 2012, when Executive Director Laura Segura read a Human Rights Watch Report that documented the pervasive problem of sexual abuse in the U.S. agricultural industry.

Nearly every farmworker interviewed for the report said they had experienced sexual violence or harassment, or knew other workers who had. The report revealed that inappropriate sexual behavior—ranging from off-color comments and sexual propositions to unwanted touching, sexual coercion and even rape—is so common in the agriculture industry that some farm-working women view sexual abuse as an unavoidable condition of employment. Several of the report’s interviewees stated that some farm foremen and supervisors view sexual relations with employees as simply a “perk of the job.”

“I learned that farm-working women are sexually harassed at alarming rates,” says Segura. “It absolutely confirmed the need to do farmworker outreach.” So, with the help of prevention specialists, she started Campos Seguros—a sexual violence prevention program that takes its message to fields, farms and labor camps.

“We want to reach people where they’re at, rather than waiting for them to come to us,” says Segura, explaining that the vast majority of farmworkers who are victimized don’t report the crime or seek services. In an industry where up to 90 percent of farmworkers in California are undocumented, fears of deportation keep many victims silent. Poverty makes victims more dependent on their jobs and, thus, more vulnerable to abusive supervisors and less likely to report abusive behavior. Other factors that prevent victims from reporting sexual abuse include language barriers, lack of knowledge about their rights and mistrust of government agencies.

Campos Seguros is looking to change at least some of these variables—by educating agricultural workers about the law, their rights, and where to find help if they are victimized. The first year of the program, Campos Seguros went out to a small Watsonville farm and gave 15-minute presentations to field crews. In 2013, they reached over 2,000 farmworkers in the Central Coast region.

These short presentations are a start, says Segura, but they are not enough. “To really change social norms and attitudes that accept violence,” she explains, “we need to do more intensive sessions.”

The fall workshop series will provide that intensiveness, with sessions focusing on cultural expectations, gender roles, intimate partner violence, sexual assault, power and consent, preventing and responding to violence and details of the legal process.

“Our goal in the workshop is to create promotoras—community leaders who go through the workshop and then take the information back to [teach others in] their community,” explains Christina Soto, programs director for Monarch.

The Coalition is using the popular education model to guide the workshop, a community-centered framework where participants are part of the process, coming up with solutions collectively. Soto envisions the fall workshop sessions as what she calls “cafecitos,” with participants “talking in a circle over coffee and bread.”

This model is designed to build relationships and trust, says Leo Moreno, detective with the Capitola Police Department and Coalition member. Moreno often responds to calls involving farmworkers—and he has felt their distrust of law enforcement.

“They’ve probably experienced corrupt police in [their home country]. They’ve possibly experienced discrimination in the U.S.,” Moreno says, describing the fearful look he’s seen on victims’ faces and the faces of their family members when they see him approach. “It takes a while for them to feel comfortable. I tell them, ‘I’m here to help you—not to determine if you’re here legally or not.’”

Law enforcement officers will take part in several of the fall workshop sessions, where they will dress in black Campos Seguros T-shirts rather than police uniforms. The hope is that participants will begin to feel at ease with the people they may need to call on for help in the future.

Back at the trial workshop at Speedling nursery, Barranco has separated the group into three sections for a small-group activity. Prevention specialists read various scenarios, then ask participants to identify whether or not they constitute sexual assault.

Hector Huizar, the nursery manager, looks on while his employees fill the warehouse with lively discussions about each scenario. “This is important,” Huizar says. “I’ve never had a problem with sexual harassment—and I don’t want it on my place. That’s why I wanted to invest in this program with my employees.”

Barranco reads a paragraph about Consuelo, a farmworker who is offered a raise and promotion if she agrees to be “friendlier” with her supervisors, who insinuate they’d like her to be friendly in a sexual way. When she refuses their offer, she loses the opportunity for promotion.

“Is this sexual harassment?” Barranco asks.

“Yes,” says Barranco, “It is very common—that’s why we’re here.”