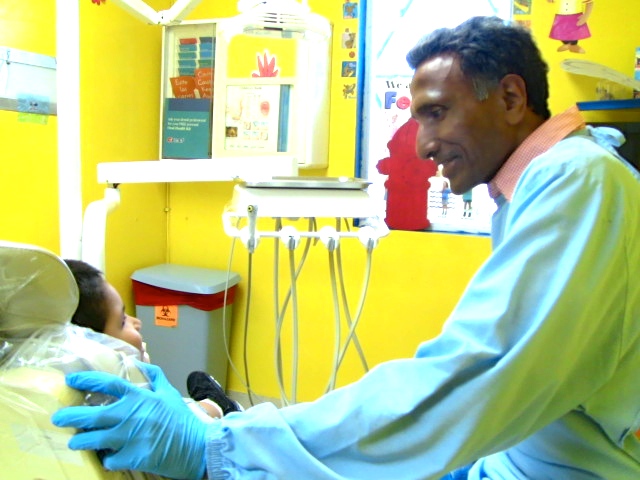 A few years ago, Kathleen Hamilton became a foster mom to 13 and 14 year old boys, who also happened to be her nephews. Both needed extensive dental work, and the services were to be covered by the state’s Medi-Cal program. But year after year, Hamilton ran into a snag.

“It was difficult to find a dentist who would take new Medi-Cal patients,” she recalls, “and every time I would go to make the next appointment, [the previous] dentist wouldn’t see them. I hopscotched all over East County San Diego, driving almost to Mexico,” she says.

Hamilton has spoken out in recent years before the Senate Budget Subcommittee as both a mother and an advocate with The Children’s Partnership, which has called tooth decay in the state’s underserved children “the largest unmet health need in California.” And it’s a problem that’s likely to grow as 900,000 children were recently moved from the phased-out Healthy Families Program into Medi-Cal, where the rolls are expected to swell to 11.5 million between this year and next. This at a time when many dentists who service the program feel increasingly disgruntled about reimbursement rates.

John Blake, DDS, says that quite a few of his patients have found the 82-year-old Children’s Dental Health Clinic in Long Beach, Calif., after unsuccessfully seeking care at other area offices.

“They said that the other dentists were no longer treating Denti-Cal patients,” says Blake, who’s had a long association with the clinic. He and his twin brother volunteered there as teens, after their mother urged them to get them off their surfboards and do something purposeful. After dental school and running his own practice for 12 years, he got wooed back to the clinic in 2002. He’s now the executive director and dental director; a picture of a sailboat hangs on his wall and a surgical mask sits on his conference table.

Blake says 90 percent of his patients are on the Denti-Cal fee schedule which, according to the Department of Health Care Services, hasn’t seen an increase since 2000. “And then last fall there was a 10 percent reduction in our fees,” Blake laments, noting that California ranks near the bottom of all states in Medicaid reimbursement rates.

“We’re trying to help those who have no other resources, and do it the correct way because we’re a teaching facility,” says Blake. Long Beach Memorial Medical Center, for which his clinic provides children’s oral-care services, is a training facility for USC dental students. And when a 4 year old comes in and needs treatment that involves surgery, the most humane way to do it is to sedate the child, Blake says.
While a number of dentists may still simply use anesthesia and restraints to keep costs manageable, he chooses to pay an anesthesiologist to sedate the child. Two hours costs $875, but Blake recoups only about $160—eating the $615 loss. He estimates three such cases each week.

“While reimbursement rates have shrunk, payroll, cost of living increases, and the costs of operating a dentistry continue to climb. But the dental material guy is not saying, ‘You guys are not getting reimbursed properly, [I’ll reduce my rate, too].’ They keep on raising their rates 5 percent, 8 percent, 10 percent…”

He estimates that Denti-Cal providers get less than 30 percent of market rate for their services. His office sees about 30 to 40 patients a day, and about 80 percent of them are on Denti-Cal.

Dentists, including Murthy, advocate that children establish a dental home, so that they get into a pattern of regular visits. But that can be difficult for those whose parents have to as Hamilton did, “make phone call after phone call after phone call,” to find a Denti-Cal provider, or who have a difficult time getting time off from work, have a language or cultural barrier, or who live too far away to commit to consistent care.

The group treated over 100,000 children in its 10 locations last year, with some patients traveling from nine surrounding counties to get services at two Northern California offices.

Renee Simpson, who lives in Northern California, says her 9-year-old son and 10-year-old daughter only got check ups three or four times in their lives until her kids’ school got Virtual Home Dental. It’s a “telehealth” program, where dental assistants and/or hygienists come in to take X-rays, clean teeth, and educate kids on prevention, and then send word back to a supervising dentist if more extensive treatment is needed.

“It was hard without a car,” Simpson recalls of the time, a few years ago, before her children’s school got the telehealth program. The kids’ dentist was on the other side of town, and when they got there, they were obstacles to getting certain services: “They would have to get approval for this and approval for that.” Recently Simpson’s 10 year old, Sophia, testified before the California Senate urging them to pass bill AB1174 to fund Virtual Home Dental past its pilot phase; the bill has already passed the Assembly.

Dentists report that staying afloat is a pressing concern. Blake says he can only do it with the help of a full time grant writer and development director, who help raise the $2 million shortfall needed for his $4 million budget. Jacks’ group partners with Health Trust in San Jose, which came to him he says.

“We were spending about a million a year and seeing 4000 patients,” says Frederick Ferrer, Health Trust’s CEO. “We were continuously paying for it, and said, ‘Can we figure out a different way?’ ”

Working together they opened a clinic in Sunnyvale, which has 50-60 percent Denti-Cal patients, and one in San Jose, which sees 85-90 percent Denti-Cal cases. Instead of paying a million dollars to care for 4000 people, says Ferrer. “We now have 20,000 patient visits at Sunnyvale, and [as a nonprofit] we get $150,000 a year in free services given back to us [from the Children’s Dental Group].”

Ferrer asserts that the reimbursement rate to support dentists who treat underserved children has dwindled because “if you’re a legislator, your children don’t have tooth decay, so you don’t understand, and why would you?”