Positive Aging: All the World’s A Stage 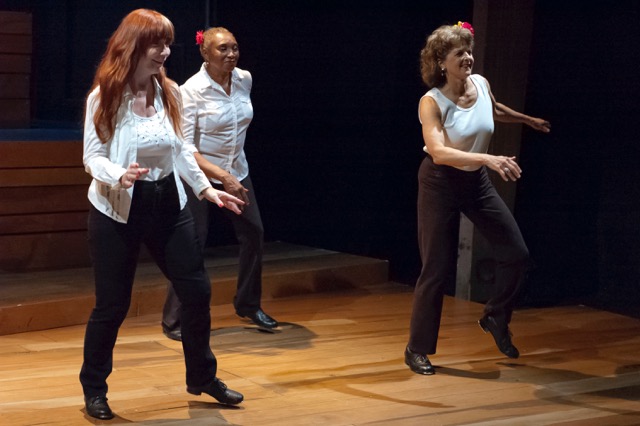 For all of today’s talk of personal freedom, rare is the person who actually lives it.

Yet freedom is one of the most frequently reported experiences of older adults who pursue bold new adventures in later life. As the blocks of doubt and failed expectations fade from sight, and life’s mortal coil becomes finite, travelers on this fresh path of aging often celebrate a new sense of freedom… and self.

Perhaps nowhere is this on display more abundantly than the Stagebridge Senior Theatre in Oakland, which has encouraged more than 2,500 older adult students to act, sing, dance, write and improvise over the past 35 years.

“Stagebridge made me go out into another part of myself that I always wanted to do something with,” says Nancy Pearlman, 71. “Because I thought ‘If not now, when?’”

Armed with a devastating diagnosis and a new attitude – “I thought my life was over” – Pearlman discovered something new and powerful about her performing self.

“I became unafraid to fail.”

After Stuart Kandell founded Stagebridge in 1979 by encouraging five women to walk on stage, he’s watched reverentially as older adults repeat the same cycle of discovery in a determined effort to reinvent themselves – and the concept of aging.

“We don’t know whether we’ve got a moment, a day, a year, 20 years, 40 years,” says Kandell. “The last lap around is a really wonderful lap for people once they get on the track.”

Today, Kandell touts Stagebridge as the country’s oldest of more than 700 senior theaters.

A decade ago, Bill Liebman defined himself in the constricted worlds of father, husband, and school psychologist.

“After I retired, a light bulb went off and I wanted to do some acting,” says Liebman, now 66.

“I actually sort of reinvented myself as an actor,” he says. “It’s just become my whole life.”

By experimenting with improvisation, musical theater and singing, Liebman has flourished, most pleased when friends at his local YMCA gym pepper him with questions about his latest role.

Most recently, he’s been cast in a Stagebridge co-production with the famed Berkeley Repertory Theatre – a paying gig.

Yet for Liebman the real treasures of acting are priceless.

“It gave me a license to express myself creatively,” he says. “I was on the younger side when I came to Stagebridge. It was very inspirational for me to work with older adults who were taking risks.”

The instructors at Stagebridge help craft this experience.

“The writers at Stagebridge surprise me constantly with their daring,” says Anthony Clarvoe, a successful playwright who began teaching at Stagebridge after relocating to the Bay Area from New York City. “They have remarkably little fear about talking about the whole range of human experience. They are very vital. Very energetic. Remarkably dedicated. And constantly looking to improve.”

Clarvoe, who has taught budding writers of all ages, calls his older adult students “The sexiest group by far.”

Officially celebrating its 35th anniversary last Thursday, Stagebridge today offers 30 different classes for 250 students, along with a wide variety of performance groups, such as the Never Too Late musical review and Radio Days – which performs select radio shows live.

In addition, Stagebridge offers TimeSlips – which helps Alzheimer’s patients and those with memory loss express themselves creatively – and Storybridge, an elder mentoring program that helps local at-risk students increase their literacy and confidence.

In its infancy, Stagebridge was a radical departure from other “lifelong learning” programs because it stimulated the bodies and minds of older adults – a far cry from tiresome bingo and slide shows.

“Lifelong learning was where people came to die,” sighs Kandell.

And it’s with a certain irony that Kandell cites the power of aging to bring pinpoint attention – “like a diamond” – to life itself.

“The greatest performances in 35 years have been given by people right before they die,” says Kandell reverently. “It’s like watching grace happen. It’s something about knowing the end is near that ratchets up everything. For everybody, it’s a very powerful experience.”

Kandell recalls visiting an elder Stagebridge student in the hospital, who was approaching her final days. He pleaded with her to attend an awards lunch so the company could honor her.

At the luncheon, she shared a fairytale she’d told many times before – the African tale of Anansi the Spider who tries to steal all the world’s wisdom.

But this time, says Kandell, her performance was magical.

“This is like the final master craftsman,” he recalls. “It was now perfect.”

Pearlman says in a culture that emphasizes youth and treats aging as a sin, senior theaters like Stagebridge become a powerful equalizer.

Kandell says artistic expression may be the greatest aging antidote ever created — and something he’s helped pass along to over 400,000 others who have watched Stagebridge performances or participated in its workshops.

“What the arts do is give people a reason to get up in the morning.”

Pearlman, a former theater arts major in college, insists her involvement with Stagebridge has slowed progression of her disease. She says re-discovering acting was the second chance she needed to perform fearlessly.

“You’re never too old when you have a burning desire to do something.”

Positive Aging: All the World’s A Stage