A Clinic Serving All, Inspired By Islam 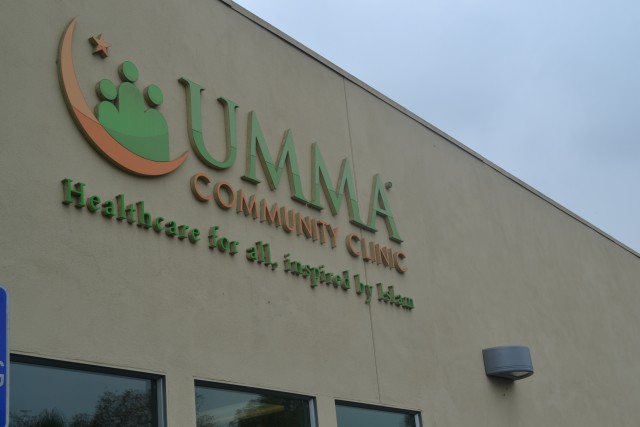 During the past two years, Gloria Ayala has engaged in a major health kick, much to the disappointment of her mother.

The 53-year-old resident of South Los Angeles exercises more; and when it comes to mealtime, she enjoys more veggies and wheat bread and fewer donuts and homemade tortillas.

“So my mom, she says, ‘Eat tortillas, I raised you with that kind of food,’” Ayala laughs. “’Why don’t you want my food any more?’”

Not that Ayala is perfect.

“I eat a little bit because I cannot leave it completely,” she says.

In the last two years, Ayala has seen her weight plummet from 240 pounds to around 180. She feels better, and her diabetes is under control. She attributes her success to her relationship with UMMA, the Islam-inspired community health clinic located five minutes from her home.

Ayala first came to UMMA shortly after it first opened, more than 17 years ago. She’s dealt with diabetes, high blood pressure and high cholesterol. Ayala works as an in-home cook and is still not insured, but says she applied for Medi-Cal and was still waiting.

Ayala’s health started to take a turn for the better through UMMA’s nutrition program. She participated in a group medical visit with other diabetes patients at a recently-opened UMMA-operated school clinic, and now makes juices from vegetables such as kale and chard grown in her own garden. She’s also participated in exercise classes taught by UMMA at the local YMCA.

“When people see me, they say, you look different,” Ayala says. “They see the difference.”

Ayala’s improved health and outlook can be tied to the work done and resources offered by UMMA, a unique outpost that has been guided by the same mission of helping all for nearly two decades.

The full name is the University Muslim Medical Association Community Clinic, but UMMA suffices. Muslim American students from UCLA Medical School and Charles Drew University founded the clinic in 1992 in the wake of that year’s civil unrest following the verdict in the Rodney King trial. The clinic, located less than a mile from the infamous corner of Florence & Normandie that served as ground zero for the ’92 riots, opened in September of 1996 and became the first Muslim American organization to be named a Federally Qualified Health Center.

Islam, a part of the clinic’s origination and even reflected in its star and crescent logo, is not the explicit focus of UMMA. The clinic serves all residents of its South Los Angeles community, which has a small number of Muslims; and the clinic itself is not staffed only with Muslim providers.

Instead, the role of Islam at UMMA is more in its mission, a principle that guides the clinic’s goal of providing for the less fortunate.

“One mission of course is to serve the community, but another one is to set an example,” says UMMA CEO Felix Aguilar. “I think a lot of Muslims in the United States see this clinic as an example that we’re engaged with the larger community. This is not a clinic that serves Muslims, it serves everybody.”

Aguilar has been with the clinic for approximately a year and a half. He spoke of the Islam term “zakat,” which is the practice of charitable giving that some members of the faith practice. Aguilar likens the moniker of UMMA clinic to that of Hollywood Presbyterian or Cedars-Sinai – facilities with religious undertones, but not religious facilities.

Aguilar, who is not Muslim, relays a story he heard from a board member – half of UMMA’s board is made up of patients – who was sitting in the clinic’s waiting room.

“She overheard two women having that discussion,” Aguilar says. “’These people are Muslim, what does that mean? Are they going to try to convert us?’ The other lady was like, ‘No, no I’ve been here before, none of that happens.’ But it is a question for a lot of people.”

Dr. Tipu Khan is a general practitioner who has been with UMMA full time since August of 2012. He says that the Muslim community is catching on to something that Jesuit and Catholic hospitals do well.

“When I come in personally, I try to instill those values of providing full, competent health care to everybody regardless of any issues or forethought when they come through the door,” says Khan, who is Muslim. “I take pride in that we’re here as a beacon of humanitarian outreach from the Muslin community.”

Growing with the ACA

Last year, UMMA saw more than 16,000 patients. This year, nearly 1,000 UMMA patients that weren’t previously covered are now covered as a result of the Affordable Care Act, most in the form of expanded Medi-Cal.

The uptick in the insured is at least partly due to UMMA’s efforts in employing enrollers who went out into the community. Aguilar says that last year 43 percent of patients had some sort of coverage, and hopes to see that number rise to 65 percent this year. While that isn’t everyone – the undocumented are one of the populations unable to get coverage – more insured patients means that more resources can be used to help the uninsured.

“I was delighted to see [the newly insured] because that’s exactly what Obamacare is supposed to be,” Aguilar says

Khan estimates he welcomes between 20 and 38 patients a day, and the 10-room clinic sees between 90 and 120 patients six days a week. Khan sees anyone from children to geriatrics, but having done a fellowship in obstetrics, he handles high-risk pregnancies as well. He adds that the clinic’s patients deal with what he calls “the trifecta:” diabetes, hypertension and dyslipidemia, as well as opiate dependence.

The clinic is going through some exciting new transitions, starting with the addition of Dr. Angelique Murphy as Chief Medical Officer. Murphy started in August, having trained in integrative medicine at the University of Arizona. When a recruiter told her about the clinic, she hesitated at first because of the name, but soon caught on to UMMA’s mission.

“What impressed me most is that UMMA has from the beginning served the population in need,” says Murphy, who started in August. “I found that humanitarian spirit inviting.”

The clinic has recently implemented shared visits, where patients with similar conditions meet together to discuss issues they face. Diabetes was the first shared topic that UMMA tackled, and is considering adding a prenatal group.

“The benefit of shared visits is that when you put people together who have a common interest, a common problem, it’s the group that helps the outcome as much as anything,” Murphy says.

Another development last August came in the form of UMMA’s new school-based clinic at Fremont High School. The five-room site has two entrances, one for the general community and one for students. The clinic is surrounded by a community garden maintained by the L.A. Neighborhood Land Trust, and Aguilar says they plan to offer dental services at Fremont.

Ayala for one is happy to tell others about the improvements she made through her relationship with UMMA.

“I feel so good to help others, to teach others what I’ve done for myself,” Ayala says.

A Clinic Serving All, Inspired By Islam