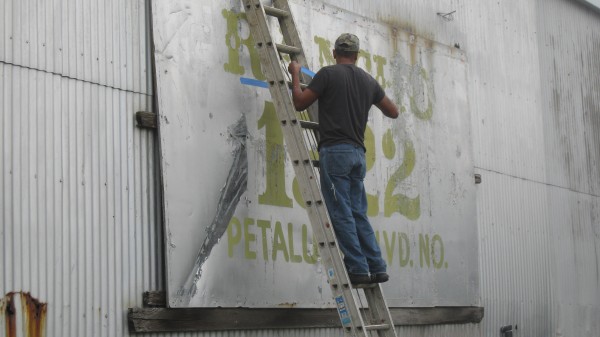 First it was the drought that dogged rancher Adam Gaska, who raises cows, sheep and Berkshire pigs on 2,000 acres of pastureland in Mendocino County.

Then the news fell like an axe: Rancho Feeding Corp. in Petaluma was shut down in January in the wake of a recall of nearly 9 million pounds of “unwholesome” beef.

Rancho had been the largest—and the last—independent slaughterhouse and packager in the Bay Area willing to work with small growers. The beef in question came from aging dairy cows, meat that was processed separately from the independent ranchers’ animals.

The Rancho slaughterhouse was a critical piece of the supply chain for sustainable, local meat, leaving consumers with fewer alternatives to factory-farmed meats, despite the growing demand.

Even before the independent slaughterhouse closed, the lack of rain had threatened to cost smaller ranchers and dairies the profitable but expensive right to call their products pasture-raised.

Margins are already slim, between 1 and 5 percent, said Rob Spiro of Good Eggs, which helps farmers get their produce to local consumers. A lot of that has to do with the lack of infrastructure for independent ranchers, Spiro said, especially in processing and distributing the meat.

The timing could not be worse. Direct to consumer food sales increased three times between 1992 and 2007, the USDA reported. That translated into $1.2 billion in sales in 2007 compared to $404 million in 1992, a rate of growth twice that of total agricultural sales.

The USDA recognized the “rising importance of locally-grown food in the U.S. food system” in a March 2014 report. Concerns about food safety, food quality, prices and the environment all factored into the growing demand.

The watchdog group Food and Water Watch, however, had already concluded in 2009 that California had lost the infrastructure necessary to respond to the steadily increasing market for local and organic meat and dairy products.

Regulatory and economic hurdles, they found, were preventing a regrowth of the industry. Smaller ranchers must find USDA approved slaughterhouses willing to process their animals.

The numbers underscore his point.

In 1970, the country’s top four firms controlled about 20 percent of the beef market, according to the American Association of Meat Processors. That number has shot up to 85 percent today.

“This makes for bigger slaughterhouses and bigger processing facilities,” AAMP Executive Director Marty Manion said. “The need for small and very small meat processors, to supply local and niche meat products, is more apparent than ever.”

And last summer, USDA regulators gave the green light to send poultry slaughtered in the U.S. to China for processing, then back to the United States without country of origin labeling.

Even Niman Ranch, whose beef is marketed as all-natural and sustainable, was sold to Hilco Equity Partners, a private equity firm.

As a result of the recall, Niman was ordered to destroy 100,000 pounds of frozen grass-fed beef processed by Rancho even though his animals were slaughtered separately from the aging dairy cows that were at the center of the recall and made up the majority of Rancho’s business.

David Evans of Marin Sun Farms stepped in to buy Rancho. He plans to reopen as an operation that serves niche, independent ranchers like Niman, Gaska and himself.

However, independent producers worry about the leverage Evans now has. He already owns the largest meatpacking operation in Northern California. Now he operates the only slaughterhouse and abattoir.

If Evans gets USDA approval, the operation will start with beef and extend his reach from ranch to distribution, a rare level of control for ranchers in the local food movement.

Marin Sun Farms will expand to other animals except poultry, said Jeff Bordes, the director of sales, pledging to keep the doors of Rancho open to independent producers. “This is a huge opportunity for the local movement,” he said.

But the drought may cost Evans the volume of livestock he will need to sustain the business. The dwindling water supply has forced ranchers and dairies to slaughter or sell off large numbers of their herd. That could mean a shortage of animals next year especially if more rain refuses to fall. As the summer months near, the likelihood of rain becomes more remote.

The Rancho recall was huge, affecting 1,000 producers, reached 45 states and hit retailers as large as Target.

“Rancho Feeding Corporation, a Petaluma, Calif. establishment, is recalling approximately 8,742,700 pounds, because it processed diseased and unsound animals and carried out these activities without the benefit or full benefit of federal inspection,” read the message posted on the USDA website. The recalled beef was processed at Rancho between Jan. 1, 2013 and Jan. 8, 2014.

Federal investigators also stepped in. Former Rancho co-owner Robert Singleton rejected suggestions of wrongdoing. But even before the shutdown, there were already too few plants.

Rancho joins a long line of independent processors that are no longer in the supply chain. The number of slaughterhouses and processors plummeted by 67 percent, from 1,211 to 809, between 1992 and 2008. In just one year, according to Census data for 2009 to 2010, a net of 21 plants closed, costing 7,044 workers their jobs.

Getting a time slot at a processor could take months for small producers like Gaska. Now some of them are “too swamped to even call back,” he said.

As a result, he had to buy a refrigerated van in order to get his meat unspoiled to Bay Area restaurants and markets hundreds of miles apart from the processor. He was able to borrow the money for the van from his landlord. “Otherwise we would have been stuck,” Gaska said.

Instead of keeping commerce local and cutting greenhouse gas emissions, ranchers are driving even further.

“It’s one key component of what we consider part of the local food movement that isn’t necessarily so local,” said Evan Wiig, a Sonoma County pig farmer and coordinator of the Farmers’ Guild, which supports new farmers and food artisans.

Growers and advocates blame the closings on consolidation of meat companies like Smithfield and Tyson, low-profit margins and complex federal regulations.

Those regulations are enforced by 7,800 inspectors responsible for overseeing the safety of billions of pounds of meat and poultry—92.3 billion in 2011—produced by 6,200 USDA-certified plants in the United States.

But the end result of the current system is that it’s hard for small plants to scale up and provide more product to the public, Food and Water Watch Assistant Director Patty Lovera said. And without USDA-certification, meat cannot cross state lines.

On top of that, buyers like Whole Foods undercut small distributors like Marin Sun Farms, who can’t afford to compete with prices large businesses can offer for local, sustainably raised meat.

The Bay Area needs a plant like Rancho if ranchers want to sell locally, said James Woltjen, a livestock specialist in the Department of Animal Science at UC Davis.

But, Woltjen said, “There’s a market. You just have to get the cattle through there.”

And that will be the challenge Evans will face when he opens. Their target opening date is by April 1.

For more information about the recall: http://1.usa.gov/1oUlAzs