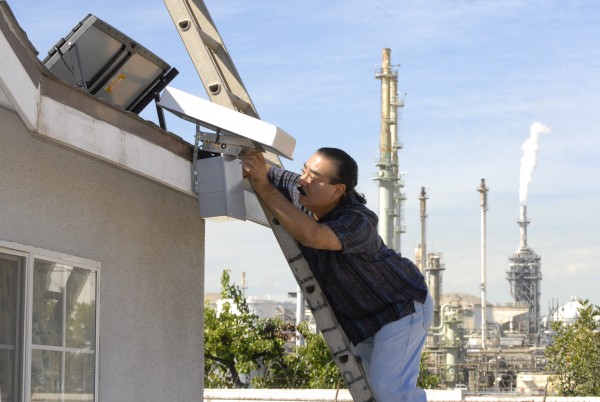 Hemmed in by the nation’s busiest container shipping port and highways heavy with truck traffic, surrounded by refineries, Los Angeles’ Wilmington neighborhood ranks as one of the most polluted in the state.

SCAQMD spokesman Sam Atwood calls the district’s refinery rules the most robust in the nation.

That ought to be encouraging, if you trust the numbers.

But the members of the Wilmington-based Coalition for a Clean Environment do not.

“From what I can tell, the refinery is the biggest problem around here,” said Wilmington resident Sarah Meafua.

She said often, the sky turns black with smoke by day and orange with flame by night. Petroleum fumes reeking like rotten eggs drift through the neighborhood.

And she suspects pollution from the Phillips site is undermining her family’s health. Her mother is undergoing treatment for breast cancer. Her husband has fungal meningitis, and her two young children have asthma.

Likewise, some 80 percent of respondents in a recent Coalition survey said they had a lot of sickness in their households, including widespread asthma and bronchitis, as well as lymphoma and leukemia.

Now, the Coalition is taking the initial steps to test the official air quality figures, to build technical skills and gather their first evidence as to what might be causing the illness.

The Coalition has installed the cigar-box-sized air quality sensor on the roof of a home a stone’s throw from the refinery. The solar-powered device gathers pollution data, then posts it to the Internet in real time.

A committee of community and government representatives will meet monthly to review pollution reports and regulator responses to their monitoring work.

Jesse Marquez, the Coalition’s executive director, acknowledged that those pollutants could be attributed to other nearby pollution sources, such as the Ports of

Los Angeles and Long Beach and the busy Harbor Freeway that passes a few hundred yards from the monitoring site.

But he suspects the most likely large source for the VOCs is fuel storage tanks on the refinery grounds venting into the atmosphere, and he called the AirBase only the first step in tying local pollution to Phillips.

“If these refineries are being regulated, and they have all these permits that they’re supposed to be in compliance to, why is there always black smoke? What’s the result of all those fires and explosions?” Marquez said.

“And we’re not talking about once a year. Every two or three weeks you can see black smoke coming out of the refineries. We need to know what’s in that smoke, and in the pollution we might not be able to see or smell.”

Marquez said the cheapest monitor capable of measuring the sulfur compounds associated with refinery emissions would have cost $20,000, far beyond his group’s means.

“Even though our VOC sensor can’t pick up benzene or toluene or differentiate between the different types of aromatic chemicals, it gives us that introduction of
learning about that world of science,” he said.

“In the near future we can point to what we’re finding and say we’re ready to go to the next level of device.”

Another benefit of starting monitoring efforts now is that it has helped to focus community attention on the refinery, Marquez said. He said the oversight committee has already forwarded 15 complaints to government investigators.

“Phillips 66 strives to share information with our neighbors through community meetings, gather their feedback, and create an avenue to maintain an open dialogue in the future. While Phillips 66 is in compliance with permit limits set by regulatory agencies, we have teams of people that work each day to ensure that we stay in compliance,” Grothe writes.

Marquez answers that the EPA regulation Grothe cites is based in “self-reporting” data, meaning that it is derived from information provided by the refineries.
In 2005, Phillips entered into a consent decree with the EPA in which it agreed to lower permit emissions limits and install continuous monitors to demonstrate compliance.

But on April 15, the federal agency’s Office of the Inspector General released a report in which it found that the EPA has failed to ensure proper compliance with such decrees. While the report does not include any specific reference to the Wilmington refinery, it does cite the agency’s difficulties in checking on whether refineries are adhering to the terms of the 2005 decree.

“We need to have independent verification to find out if we’re being told everything there is to know,” he said.

Eventually, he plans to expand LACEEN to monitor four refineries in Wilmington and three others in Carson, Torrance and El Segundo.

The Coalition’s effort draws on a monitoring approach developed by Comite Civico Del Valle, a public-interest organization based in Brawley. The Wilmington project, the first to use an air quality monitor, joins community reporting and mapping programs in the Imperial and Coachella valleys, Kern County and Fresno.
The Comite’s ivanonline.org website includes links to all five projects.

“Our intention with this monitoring is not to replace government,” said Luis Olmedo, Comite Civico’s executive director. “It’s to expand the coverage in places where government cannot be.”

“We’re now getting reports in the middle of the night for incidents that are occurring, Well, we don’t have government in the environmental area working 24 hours a day, doing surveillance. A lot of these crimes are happening in the middle night, and people know, because it’s in their community. It’s in their back yards.”
Another advantage to this crowdsourcing approach is that it keeps pollution in public view, Olmedo said.

“One of the biggest concerns is that these reports go into government databases and they get lost,” he said.

Daren Brabham, an assistant professor at the University of Southern California’s Annenberg School for Communication and Journalism and an authority on crowdsourcing, said citizen monitoring projects can sometimes become cluttered with irrelevant observations.

But when the monitoring is directed, with people given clear instructions on what to look for, it can help focus regulators’ attention on community problems, Brabham said.

“If three people notice something, that’s noteworthy. If 10 people are reporting the same thing, that can be persuasive.” he said.

“Crowdsourcing is not really a panacea, especially with environmental modeling. But if you can correlate that data with other data, say if you have people monitoring the moisture of their soil anecdotally, and you can correlate that with a satellite passing overhead that measures soil moisture, you have an even better picture.”

Bill Griswold, a computer science professor at the Jacobs School of Engineering at UC San Diego, put crowdsourcing to work in 2012 with CitiSense, a network of 20 air-quality monitoring devices that delivered real-time data to users’ cell phones and home computers.

“If you look at the pollution map… on any given day for LA or San Diego, it’s all one color, which is not the reality. It’s accurate at the point of measurement, but it’s not accurate in other places,” he said.

Griswold said such technology can popularize environmental health research. Off-the-shelf devices as sensitive as the ones he built now are available for around $1,500, and he expects prices to drop dramatically in coming years.

“I think we can become pretty complacent as citizens to let our government take care of us, but it’s important that a level of civic action takes place and we take responsibility for our community well-being at all sorts of levels. The police can’t be solely responsible for crime prevention and air regulators can’t do everything for air quality,” he said.

“With this technology, a revolution is afoot, and it will be interesting to see how it unfolds.”