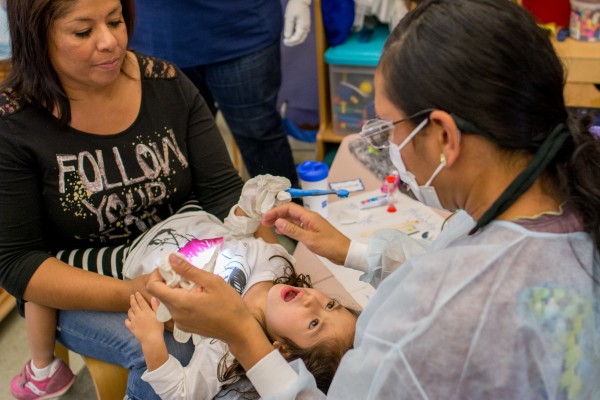 Doctor Paul Glassman has spent his 40-year dentistry career looking for ways to make going to the dentist more affordable and accessible.  As technology has evolved, so have his strategies. Glassman and his team at the University of the Pacific School of Dentistry think they’ve found a way to serve millions more clients through virtual dentistry. The only problem is that current laws don’t allow it.

“Work in the 1990’s focused on building institutions in urban centers,” Glassman said. “There were lots of problems with that approach.”

Glassman noted that about half of the population doesn’t get regular dental care because of myriad factors, including astronomical costs and the belief that to be poor is to have bad teeth.

“In downtown San Francisco there’s a building with 100 dentists in it, yet you can have people living two blocks away that can’t get access,” Glassman said.

With virtual dentistry, dental hygienists bring the dentist’s office to the patient in the trunk of their cars. They are able to clean clients’ teeth, take x-rays, and create a chart for the patient. They then send the chart electronically to a dentist who reviews and makes recommendations.

Under state law, however, hygienists aren’t actually allowed to bill for x-rays they take without a prescription from a dentist or provide temporary fillings, and dentists can’t get reimbursed for virtual dentistry through Denti-Cal–the state’s low-income dental program.

Glassman and his colleagues at the Pacific Center for Special Care at the University of the Pacific School of Dentistry have been able to pilot a virtual dentistry project for the last three years with the laws suspended, as a part of California’s Health Workforce Pilot Project Program.

Dental Hygienist Lisa Greenshields is piloting the project in Twin Rivers School District in North Sacramento. Greenshields was a hygienist in a private practice for fifteen years before she decided to go into public health.

“Once you get out there, you know what the need is,” Greenshields said. “When you look at a little student and you say ‘Does that tooth hurt you?’ They say ‘Only if the air is cold outside.’”

California has the third worst children’s dental health, ranked just above Arizona and Texas in the National Survey of Children’s health conducted in 2007 – the last year most of these studies were conducted.

Low reimbursement rates by Denti-Cal mean many counties don’t have enough dentists accepting the public insurance plan.  But many families also have difficulty with transportation or getting time off work to go to dentist’s office during working hours.

“The school is 76 percent working poor,” Greenshields said. “I think most of them are undocumented immigrants.”

She began by sending consent forms home to the parents. More than 60 percent opted to be in the program. Many of the parents at her school are at risk of losing their jobs if they took the day off to take their child to the dentist.

“A lot of them haven’t ever seen a dentist,” Greenshields said of her students. “Their parents haven’t been to a dentist.”

Now students ask her for an extra toothbrush for their siblings. “It raises the oral I.Q. of everybody in the house,” Greenshields said.

Greenshields goes to the school 1-3 days a week to work with 3rd graders.  For the first couple of years she would pack up and tear down her equipment each day. “I could be packed and out of that room in 40 minutes,” she said.

When the school moved locations last year they were able to allocate a special room for dental exams, allowing Greenshields to see more patients during the day.

Greenshields works with the teachers to make sure she doesn’t take kids out of class during lessons they may be struggling with.  Many may be having a hard time in school because of a lack of dental care: students with toothaches were four times more likely to have a low grade point average, according to a 2012 study conducted in the Los Angeles Unified School District and published in the American Journal of Public Health.

When Greenshields brings them to the dental room she does a thorough cleaning of the children’s teeth, takes x-rays and digitally sends them to a nearby dentist. “We do a lot of education on the first visit.”

She works with a dentist 10 miles away to review the children’s charts and make recommendations, either to continue with preventative care or to refer them to a dentist.

Sometimes he recommends she put in a temporary filling, something Greenshields is trained to do.

“You have a baby tooth that’s going to fall out in maybe a year or a permanent molar if there’s a little bit of decay in,” Greenshields said, “it seals the tooth off and stops decay.” Sometimes the child may never need to replace the filling. This method has proven a successful way to end toothaches and prevent further decay.

Four-year-old Isaac Arthur goes to another one of the project’s pilot sites at a Head Start preschool in Santa Monica. When his mother, Cindy Villasenor got a call from the school about participating in the project she was more than happy for him to get free dental care.

The team reviewing Isaac’s teeth recommended putting in a temporary filling, and Villasenor was glad they caught it.

She has not been to a dentist in 12 years because she doesn’t have dental coverage. But her son is covered by Denti-Cal and she does take him to a dentist every six months. However, they didn’t catch the cavity caught by the hygienist at his school.

Greenshields said she is able to meet the needs of more than 60 percent of the students she sees on–site.

Right now the project is grant funded and Greenshields is only working with the 8 classes of third graders at the school.

“What we’re hoping for is later on to be able to bill for our services and become sustainable,” Greenshields said.

In order for the work to continue and expand, California laws would need to change so that hygienists can decide which x-rays to take without a prescription from a dentist and do the temporary fillings that were so helpful for Isaac Arthur.  Denti-Cal would also need to be reformed so that dentists could be reimbursed for virtual dental exams.

These reforms are the goal of State Assembly Bill 1174, which is working its way through the state legislature, said Jennifer Kattlove, advocate with the Children’s Partnership.

Paul Glassman is hopeful that these reforms will finally bring about the solution he’s been looking for his entire career.

“Once we have ability to do these procedures and get them paid for it,” Glassman said, “within five years we can get literally millions of new people care.”