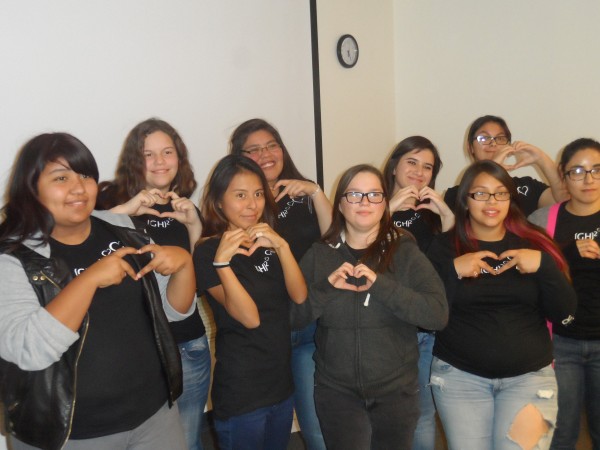 Reyna Urzua, a 16-year-old from Soledad, lost a friend to suicide and has been separated from someone she loves because of domestic violence. Now the soft-spoken teen is realizing she has the power to speak up, for herself and other girls.

Urzua is part of a girl-led initiative in Monterey County. The initiative, called Girls’ Health in Girls’ Hands, (GHGH) teaches participants to advocate for themselves and their peers.

The initiative sprung from research commissioned by the Women’s Fund of Monterey County in 2009. They recruited 57 girls at high schools throughout the county, offering them a stipend to help understand girls’ health needs. The high-schoolers surveyed more than 1,220 of their peers, and helped to identify areas where girls say they need the most help: learning more about their bodies, nutrition and mental health issues. Their report, issued in 2011, was called “Girls’ Health in Girls’ Hands: A Girls’ Health Action Research Project.”

On the basis of that study, GHGH was formed in 2012, a collaboration of six organizations in the county offering clubs and programs for girls. And the girls involved decided to focus their current efforts on bullying, suicide prevention and improving self-esteem.

Their concerns reflect what teens struggle with nationwide. A 2012 National Center for Education Statistics study showed that in 2011, 28 percent of 12 to 18-year-olds reported being bullied at school. And the Centers for Disease Control and Prevention reports that nationally, suicide is the third leading cause of death among 10 to 24-year-olds.

Schools weren’t necessarily providing all of the information girls felt they needed. Roxanna Sanchez, a junior at Greenfield High School at the time, worked on the original report, and recalls a real need for more health information there. Budget cuts had eliminated health classes at local high schools and teen pregnancies were high in Greenfield.

“My school needed resources,” said Sanchez, who didn’t take a health class until she was in college. “I saw girls I went to kindergarten with be moms at 15.”

Since the report, the girls have taken on projects aimed at meeting these needs with help from the six local organizations that collaborate on the GHGH initiative: the Boys & Girls Clubs of Monterey County, Girls Inc. of the Central Coast, the Monterey County Health Department, Planned Parenthood Mar Monte, the YWCA Monterey County and the Monterey County Rape Crisis Center. They work together towards three common goals: providing girls with better access to health information and support services, empowering them through leadership development and training them in advocacy.

Kayla Crocker, a 17-year-old member of the Salinas My Life Club, part of the Monterey County Rape Crisis Center, is now also part of the initiative’s Girls Leadership Network. Members of her club and the GHGH network have made a video about preventing teen suicide and plan to show it at local high schools.

Girls in the GHGH network are also launching a “Post-a-Smile” anti bullying campaign in which students will use post-it notes to cover their schools with positive messages about their peers.

“I don’t think anyone should ever be left out in the dark. They should always have someone to turn to,” Crocker said.

Yaeli Rojas, 15, came up with the Post-a Smile campaign idea. Her cousin was bullied in high school and she and her friends launched a similar campaign, which their whole school got behind. For a few months there wasn’t as much bullying, she said.

GHGH girls are also planning a Mar. 1 summit at Chartwell School in Seaside. They will lead workshops on dealing with challenging emotional issues, reproductive health and teaching advocacy, such as how girls can adopt the suicide prevention and bullying campaigns at their schools.

Marlene Trotter-Murray, senior impact director for the Seaside Clubhouse of the Boys & Girls Clubs of Monterey County, said she was astonished that these girls are taking the initiative to go talk to other high school principals about setting up these campaigns.

To date the Woman’s Fund has raised $500,000 to support the initiative, which is used to fund the kind of programming that the girls requested.

For Urzua, there’s no turning back on this path of advocacy. She plans to get college degrees in law and political science and serve in the government where she can have a greater impact.

At the spring 2013 summit at the Rancho Cielo Youth Campus in Salinas, Urzua conducted her own workshop on relationship violence.

“I was nervous, then I thought, maybe it will help some girls out there,” she said. “My friend [who] committed suicide … she was always there for me. I’m doing this to help other people and I know she’d probably be proud of me.”