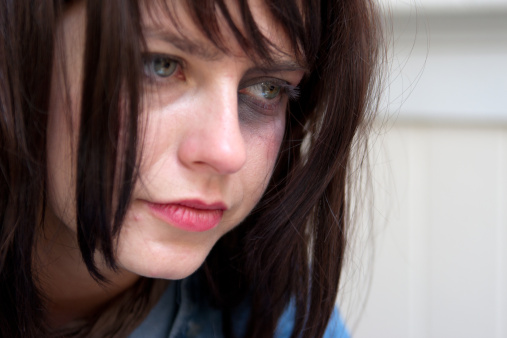 The woman came into the shelter high on methamphetamine that her abuser had forced her to use. Her children towed along.

She’d wanted to get away from the abusive relationship and the drugs for years, but she hadn’t known where to turn. She lived in rural northern California, where domestic violence shelters are few and far between. She was poor and jobless, and her abuser held the keys to the car.

Somehow, though, after a particularly bad week of her husband’s rage, she showed up on the doorstep of Harrington House, the only domestic violence organization in Del Norte County.

“She was in pretty bad shape,” said Melanie Day, a client advocate for the nonprofit. “But we see women in her same situation all the time.”

Rates of domestic violence here, in California’s most northwestern county, are by far the highest in the state, according to 2012 statistics, the latest available. That year, Del Norte had 53 domestic-violence related calls to police for every 1,000 residents. That was more than eight times the statewide rate of 6.2 calls per 1,000 people.

It was also whopping 691 percent increase from 2010, when the county’s rate was just 6.7 calls, about the state average that year.

Treatment providers in Del Norte, as well as those who support them statewide, are trying to figure out how things have gotten so bad. Is it the growing meth problem? How about the lack of jobs, which can put extra stress on families and make it harder for victims to leave? Does the rural, sparsely populated county need more services? More education? Have service providers done a poor job of reaching out to people from different backgrounds, including those who live on the county’s four federally recognized Native American tribal lands?

It’s probably a combination of all of the above, speculates Katherine Leathers, program director for Harrington House. The one thing she’s certain about is that the numbers aren’t inflated, over-reported or a result of other errors.

“This is something we acutely face everyday,” she said.

“We have a long and large footprint we have to cover, and poverty has a lot to do with it, because these are underserved communities.”

In 2011, Del Norte’s domestic violence rate rose to 32.9 and continued climbing. Rates for 2013 have not been released yet, but Leathers said they appear to be as high as the previous year in Del Norte. By contrast, the county with the second highest rate of domestic violence in California, Inyo County, had 18.1 calls per 1,000 people last year.

In 2012, more than 20 percent of all calls to police in Crescent City, the only incorporated city in Del Norte, were to report rapes or domestic violence, according to Leathers. “The 2013-14 numbers are consistent with that so far,” she said.

The majority of residents the shelter sees, however, come from rural homes tucked away in the 1,000-square-mile county or one of the tribal lands here.

“Everyday we come into the shelter, we have no idea who’s going to call or walk through our doors,” Leathers said. “We are in a community that’s rural, where split families, drug and alcohol issues and economic problems are common. We do serve each and every individual hoping they’ll be our last ones, but more people keep coming.”

Drug and alcohol abuse aren’t excuses for domestic violence, Leathers tells her clients, but they can coexist in a dark cycle.

Because the county is so small — roughly 28,000 people live there — word can travel fast, making some victims reluctant to file charges against their abusers, said Teri Davis, domestic violence and sexual assault advocate with the Inner Tribal Council of California, who works on the Elk Valley tribal land in Del Norte.

“A lot of times the Native victims don’t feel comfortable going to outside agencies, but they also don’t feel comfortable going to the Native agencies because they have relatives or their perpetrator has relatives that work there,” she said. “It’d be like if anybody else went to the courthouse and their perpetrator was working in the courthouse. Pretty much with all of the tribal agencies, you know someone related to you.”

Davis believes this may have led to abusers going unpunished for years, leaving them to find new victims and quietly worsening the problem.

Statewide domestic violence agencies have been watching the Del Norte statistics, but they don’t have an answer as to why the rate is so much higher there than in other similarly rural, small counties.

“Varying rates of domestic violence by region are attributable to many different factors,” said Camille Hayes, spokeswoman for the California Partnership to End Domestic Violence.

“You can’t really nail it down to one variable, like geography.”

Rather than spend too much time speculating on what’s causing the violence, Harrington House is trying to prevent it in the first place. The nonprofit introduced a dating-violence prevention program last year in some high schools and the county juvenile hall. Leathers is working to get the program into middle school health curriculum.

She also plans to apply for a competitive grant that would pay for a domestic violence advocate to respond to police calls and help victims file restraining orders.

Meanwhile, the shelter is still treating the victims who walk through its doors everyday. All too often, they return to their abusers — nationwide statistics show that victims return an average of seven or eight times before leaving for good, said Day, who watched her mother experience domestic violence as a child.

But, sometimes, as in the case of the woman who arrived hooked on meth, they’re able to make a clean break.

Day said she still sees the woman and her children around town.

“I see them all the time at our Wal-Mart and they like to say hi,” she said. “She still says thank you.”