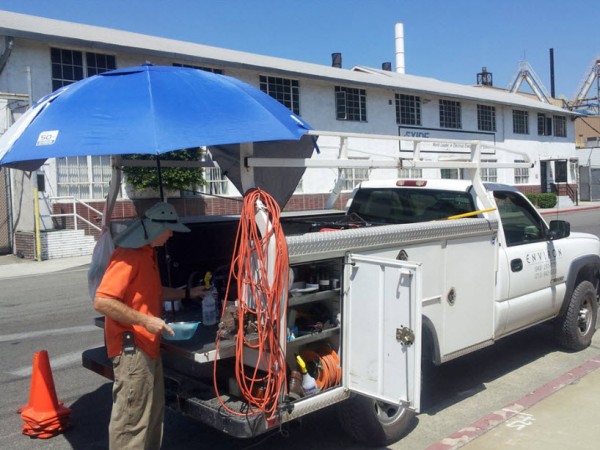 As state-ordered testing of the soil around a battery recycling plant gets underway in a low-income neighborhood just east of downtown Los Angeles, activists say they already know what the tests will show.

They’re convinced that Exide Technologies’ plant has poisoned surrounding communities with lead, arsenic and other heavy industrial wastes, and the only solution is to close the plant before it can do any more harm.

“I think it’s great that they’re testing, and I’d say that it’s long overdue,” said Msgr. John Moretta of Resurrection Catholic Church in Boyle Heights, adding that members of his congregation have long been worried about emissions from the plant. “They’re certainly going to find lead there,” Moretta said. “At what point do you wait for them to go into more violations before you shut them down?”

The plant has a long history of air pollution write-ups, including allegations that it allowed lead dust to contaminate the surrounding neighborhood, regulators say. Still, state officials allowed the factory, which melts tens of thousands of batteries a day, to operate on “interim status” for some 30 years.

In April, the state Department of Toxic Substances Control ordered Exide to suspend operations. Regulators said arsenic leaking from the plant’s faulty pipes into the air endangered as many as 110,000 people living nearby. The South Coast Air Quality Management District estimated cancer risk from the airborne arsenic at up to 15 times state standards. Further, the Department of Toxic Substances Control found, contaminants had seeped into the ground at up to 63 times the levels allowed under state law.

But on July 7, just five days after Lavin’s ruling, Exide reported that heat had damaged air filtration devices in one of two “baghouses” that are supposed to scrub out toxic emissions. Even though its air filtration system was compromised, the factory continued to operate, South Coast Air Quality Management District spokesman Sam Atwood said.

He said Exide temporarily shut down portions of their factory that vented to the baghouses but resumed operations the next day, triggering a citation from the Air Quality Management District on July 9. After that, the company closed down operations until the filtration system was repaired, a District report shows.

The District had ordered additional remediation measures and set a deadline of Sept. 1 for Exide to report what new steps it was taking to safeguard the public from its toxic emissions.

But in an interview Wednesday, Atwood said no such report had been received.

“I think their response is going to be, ‘Our plan is what we’ve already done,’” Atwood said.

The company has installed an automatic door between a storage bin for dismantled batteries and blast furnaces where it melts them, he said. Formerly, the furnaces could freely vent gases into the air through the entrance to the storage bin. Now, the automatic gate keeps that passageway closed part of the time.

“Then the question becomes, ‘Where’s the proof that this has accomplished the risk reduction?’” Atwood said.

Exide spokeswoman Susan Jaramillo did not respond to requests for comment last week.

Bell City Councilman Nestor Enrique Valencia, a founder of the health activist group Our Salud, said he’s skeptical of government efforts. He admits that’s partly due to his experience of government in his own city, which was shaken by a political corruption scandal in 2010 and 2011. Valencia, who was not implicated in the scandal, won his council seat in a 2011 recall election.

“After all that, I’m not going to sit there and listen to a bunch of bureaucrats. I’m just very leery, if not skeptical, of (state agencies’) work,” he said. “I know they’re trying, but I don’t see them being very successful in closing this plant down.”

Valencia said a private lab has tested the blood-lead levels of some 15 people living in the area, and additional testing is scheduled. He’s asked local school officials for permission to meet with parents on campus and urge them to have their children tested.

Test results will be available in early December, Edmondson said. If they show contamination, the department will conduct additional testing in a broader area, he said.

Meanwhile, at the Resurrection Catholic School, which is affiliated with Msgr. Moretta’s parish, principal Angelica Figueroa said faculty have been encouraging children to participate in the political processes that can bring companies like Exide under closer government regulation.

The school is about a mile and a half from Exide.

“These companies would not go to the Westside or Pasadena or any other more affluent area,” she said. “Why? Because people there will step up and voice their concerns. Well, I want our students to know that they have that same right.”

Milagro Morales, 14, graduated from Resurrection last spring and now is a freshman at a nearby parochial school.

She said she remains concerned about state agency reports that show markedly higher concentrations of lead and arsenic immediately adjacent to the factory.

“Air moves. It doesn’t just stay in one place,” she said. “That means that all this pollution is moving through the surrounding area, too.”