Community Healer: A Daughter of the Imperial Valley Creates a Haven for Kids 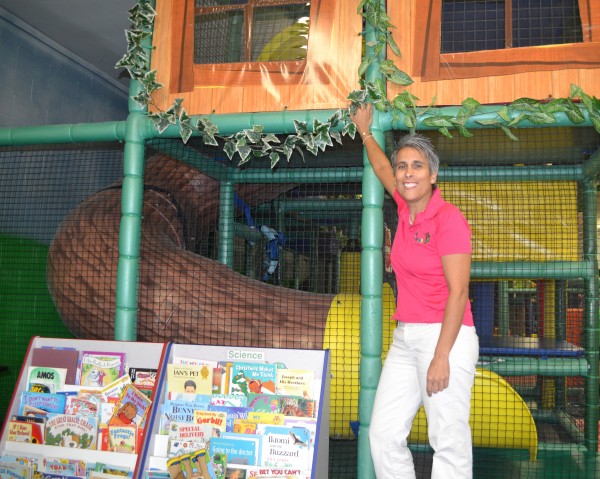 It is her vision.

“The way it is right now is almost identical to the way I conjured it up,” said Nava-Bermudez, taking stock of what was once a large grocery store. Instead of milk, bread and eggs, the rainbow-colored building off Highway 86 in this small farming town in Imperial County now houses a veritable child’s dream of activities. There’s a large playground that stretches to the ceiling, computer stations, books, an interactive video game that projects onto the floor, and toys, toys, toys spread throughout this brightly-decorated oasis.

Nava-Bermudez is the director of the Family Treehouse, which she opened in November of 2002. The mission of the non-profit Treehouse is to provide a space for children up to age six who aren’t enrolled in preschool to interact, develop social skills and, simply, to be kids. It also is a forum for parents to interact, compare notes on child rearing and build community. In addition to serving the community at large, the Treehouse also works with local social services to facilitate family visitations.

The Family Treehouse would not exist without the inspiration and determination of Nava-Bermudez.

Following the birth of her first child, Nava-Bermudez quickly found herself isolated. She grew up in the Imperial Valley, but lived in San Diego for seven years while she earned a degree in health science from San Diego State University. She and her husband moved back to the Imperial Valley to start their own family.

After the birth of her daughter, now 19, Nava-Bermudez became a stay-at-home mother, out of the workforce and out of school, cut off in a part of California with few resources for children and even fewer for the stay-at-home parents who raise them.

“I was not the only one suffering from this whole idea of maternal depression,” she said.

Though Nava-Bermudez pulled through that phase in her life, taking a job with the County Department of Public Health and returning to SDSU to earn a Master’s in public health once her daughter was older, she didn’t forget those feelings of isolation and decided to do something about it. She put proposals together for a pair of projects. In addition to the Treehouse, she also wanted to establish a car seat program for low income families.

“Never thinking I’d get both, I ended up getting both,” Nava-Bermudez, 44, said, her previously long brunette hair cropped short, streaked with gray. “Two weeks after I graduated with my Masters I found out I was funded, and two weeks after that I found out I was expecting our second child. So I started the first year of this project being pregnant, fresh out of grad school. It was just crazy. But my inspiration came from my experiences being a stay-at-home-mom with my daughter, and after that my inspiration came from other moms sharing their stories, and seeing here in Imperial County that we lacked resources for this whole population that was coming in as the Imperial Valley was growing.”

Imperial County has about 177,000 residents and saw a spike in growth last decade as an affordable alternative to the skyrocketing housing costs in nearby San Diego County. Farming is the primary driver of the local economy.

Marsela Lopez of El Centro first learned of the Family Treehouse through the car seat program. She now brings her son and daughter to the facility.

“You get to talk to other moms and see what works for them and maybe what works for you,” Lopez said as young Victor and Isabella played nearby. “They learn and I learn too.”

According to Nava-Bermudez, approximately half of the children in Imperial County do not attend preschool and miss out on not just the learning aspects but the social interaction that preschool can offer.

From understanding how frequently a baby feeds to learning simple nursery rhymes, the Treehouse fills that gap. Nava-Bermudez said that she gets between 60 and 70 visitors a week, and that up to half of the children who come to the Treehouse have a developmental delay. The Treehouse provides free developmental screenings, and offers low-cost early childhood education.

Most families, like much of Imperial County, are working class. Nava-Bermudez charges $50 a month per family for unlimited access to the Treehouse, no matter the number of children. She offers what she calls scholarships for those families who even $50 is a hardship.

The Treehouse is funded primarily through First 5 California by way of the Imperial County Children and Families First Commission, the United Way, the monthly dues, and the occasional fundraiser.

The oldest of four children, Nava-Bermudez was born in Brawley and raised first in Niland before her family moved to El Centro, where she graduated from Central Union High School and left for college in San Diego. She now lives in Imperial.

Jaclyn Martinez, an early interventionist at the Treehouse, has known Nava-Bermudez since 2007 when she took a child development psychology course at SDSU’s satellite campus in Calexico taught by Nava-Bermudez (she now teaches at the University of Phoenix). Martinez inquired about any job openings at the Treehouse, and started working as the receptionist while she finished her B.S. in psychology.

“She’s an activist,” Martinez said of Nava-Bermudez. “She’s a go getter. She’s a person who cares about the community.”

Alma Martinez of Brawley has been coming to the Treehouse for seven years, first with her nephew and then with her own three children.

“There’s really not a place here in the Valley where kids can interact and have more activities to do, socialize,” Martinez said. “Parents get to connect. Sometimes we see, how’s your kid doing, how’s my kid doing. It’s kind of like a support system.”

She said her oldest child Danielma, 4, wasn’t very social at the beginning and was only comfortable with her cousins.

“When we were coming here, she had to learn how to socialize, how to share, how to be patient, how to take turns, how to talk to other kids, how to make make friends, how to initiate play, how to set boundaries,” Martinez said. “It’s a lot of things that she has to see, compare, contrast, deal with, problem solve. It’s helped her a lot. “

And that’s what drives Treehouse, and by extension Nava-Bermudez: helping children, and their parents.

“Every day, inspiration comes from the children that we work with,” Nava-Bermudez said.

Community Healer: A Daughter of the Imperial Valley Creates a Haven for Kids