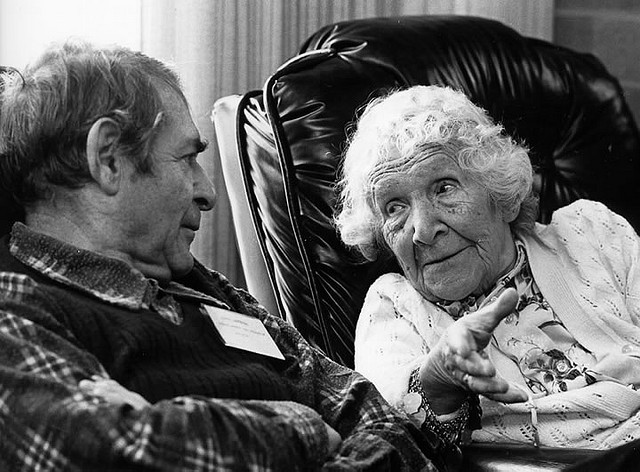 Ten years ago, Gloria Hernandez was a housemother for 11 international students in San Francisco, until her landlord decided to sell the building and force her out. Already diagnosed with post-traumatic stress from a variety of abuses earlier in life, she suffered more emotional harm from his threats, which included banging pots while she slept. Hernandez eventually suffered a stroke.

Today, Hernandez lives in the Mission Creek Senior Community, and her neighbors are baseball’s World Champion San Francisco Giants. Her infectious optimism is illuminated in the address on her business card: “Heaven on Earth.”

“Because I went from darkness to the light of heaven, and living here just changed my life,” says Hernandez, 75. “If you speak to a lot of people here, they’ll tell you it’s paradise.”

Mission Creek is near the heart of downtown in the China Basin area re-energized by AT&T Park. The neighborhood is rife with public transportation options, shops and services, including the first San Francisco library branch opened in more than 40 years. Joining the library on street level in the same building are a coffee shop, cleaners, and optometrist. Nearby are other stores.

Mary Fones, 85, waited almost a year to get into Mission Creek, but is glad she did. Her macular degeneration makes easy mass transit to see relatives – via bus, light rail or train – a godsend.

“It’s a great area for transportation to get around,” she says. “It think we’re very blessed to have this kind of facility for seniors.”

With San Francisco rents rivaling those in New York City and evictions skyrocketing as real estate speculators eject long-time residents, there are thousands more older adults who would like to join Mission Creek’s 180 existing tenants.

As one of several volunteer groups, pharmacy students from nearby UC San Francisco also visit Mission Creek to conduct a comprehensive “brown bag” review of residents’ prescription drugs, pointing out potential complications, or suggesting further review by a physician.

There’s also food distribution once a week for building residents and those participating in the onsite adult day health program.
The hallmark of social services in San Francisco has always been caring for the underserved, and the site serves a variety of ethnicities and sexual orientations. Ten Mission Creek units are reserved for HOPWA: Housing Opportunities for People with AIDS.

“It wasn’t a highly supportive atmosphere, so I was basically in my room,” says Sandritter, 66, who has HIV.

There, Sandritter felt isolated and disconnected from the world – a common complaint from fellow seniors.

“As they became older and more vulnerable they became less likely to talk about their life,” he says.

After his one-year anniversary at Mission Creek, today Sandritter is at the hub of a wealth of social interactions, particularly a LGBT support group of 10 people that meets monthly. A former operations manager for a non-profit, Sandritter sings with the San Francisco Gay Men’s Chorus, acts as a peer counselor for the AIDS Health Project, and has become a marriage and family therapist.

I don’t ever want to go back to living in that kind of shell,” he says.

Opened in 2006, Mission Creek was besieged with over 900 applications for its 88 units of low-income, Section 8 Housing. Another 51 units are designated for those at risk of homelessness.

“It was absolutely overwhelming, says Amanda McDade, former director of senior services and senior housing. “The need is so great.”

For some of the facility’s residents – who must be 62 to qualify – this isn’t their first time in publicly supported housing.

“A lot or them have a very sordid past,” admits McDade, citing drug and behavioral problems.

“They’re also hooked up with an intense mental health manager,” adds Jennifer Darlington, resident services coordinator. “A lot of our clients are not able to advocate for themselves.”

Mission Creek staff speak a variety of languages to assist the over 30 nationalities housed.

For Hernandez, life at Mission Creek is much more than just secure housing. It’s a place to come alive.

Hernandez peers out her window, which overlooks Mission Creek Park and the liquid channel that fingers past the Giants’ home ballpark.

“It’s all holistic healing,” she says. “Look out there. How can you not get healthy with that park out there, and that water?”

Her view connects her in more than just geography with her baseball neighbors.

When a Giant hits the ball over the right field bleachers, it lands in McCovey Cove, giving players not just a round-tripper, but something even better.

Which is exactly how Gloria Hernandez feels about her life now.

“I think the most important thing for any human being is that there is hope, there is help, and that they’re not alone.”