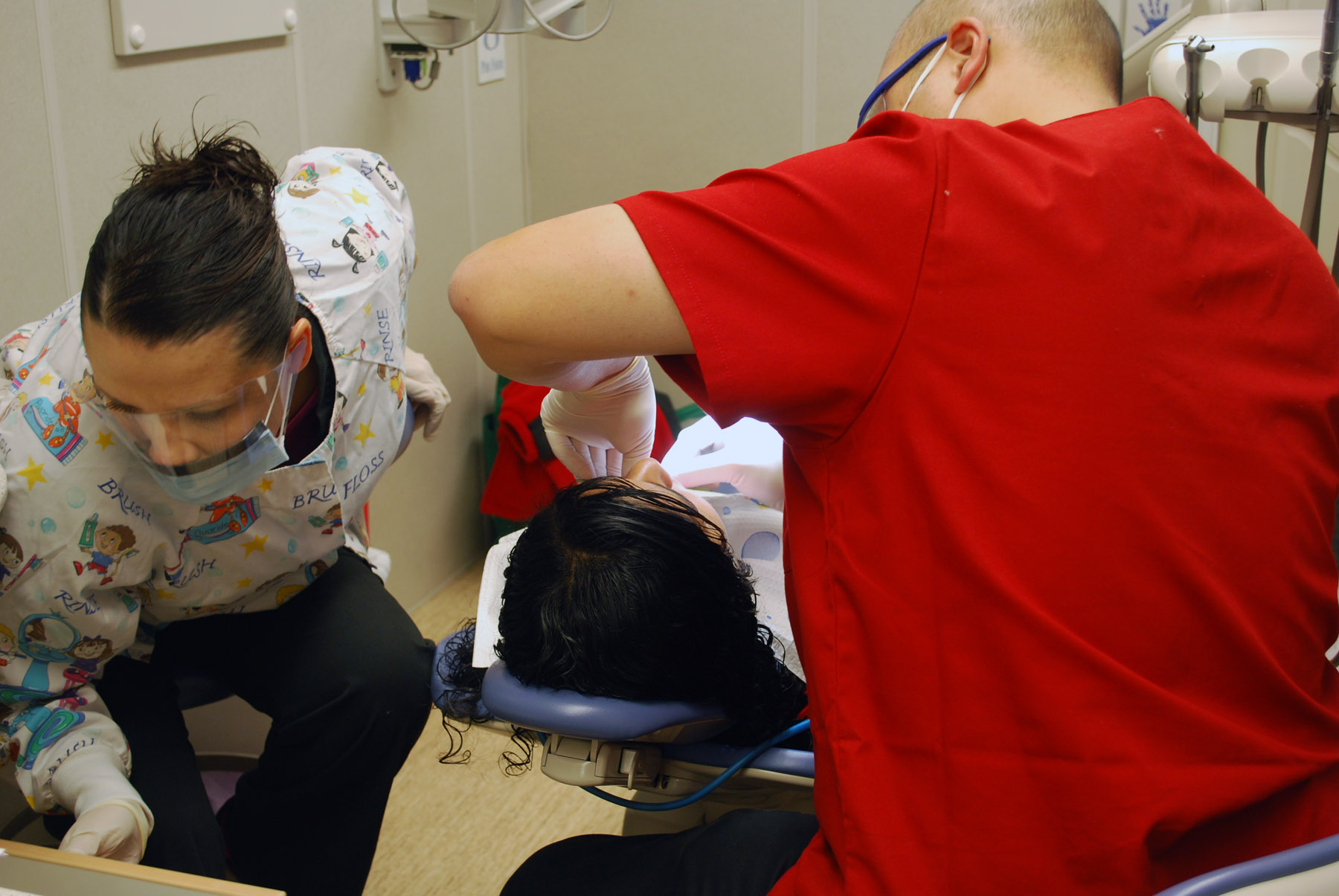 While celebrities and golf professionals gathered at Pebble Beach as part of the AT&T Pro Am in February, a group of teenagers gathered under a tent in a rainy parking lot at the Twin Creeks Golf Course in Salinas to await appointments at a mobile clinic.

Christina’s Smile Children’s Dental Clinic has been following the PGA tour for 20 years, stopping in nearby communities to offer free dental services to low-income, uninsured children from ages 6 to 15. Christina’s Smile dental clinics are held in cooperation with the PGA Tour and Champions Tour, with some members of the tours on the advisory board for the nonprofit. Diane Stigler, the vice president of operations for Christina’s Smile, said scheduling stops in conjunction with the golf tournaments also helps to raise the profile of the nonprofit.

Working with local agencies, such as the Monterey County Office of Education’s Migrant Education Program, they provided dental care to 120 students over a three-day run.

Since starting the program, 47,000 children have been served across the United States.

“This is the sixth year the clinic has been offered to our county,” said Ernesto Vela, the coordinator administrator for the Migrant Education Program.

During a three-day stint in Salinas, the program provided care to 80 migrant students as well as 40 students from Santa Rita Elementary School, also in Salinas.

The Monterey County students reflect a statewide trend in lack of access to dental care for low-income or uninsured students. The Pew Center on the States graded each state on providing access to dental care for children in a report released in 2011. They gave California a C grade for meeting four of the eight benchmarks recommended to improve children’s oral health.

The study found that while 29 million children had dental coverage through Medicaid, only 12.9 million actually received dental services, nationwide. The Pew report notes that with the Affordable Care Act of 2010, more children will have access to dental insurance, but states will need to implement policies that support prevention and increases the number of providers available to offer services.

The Pew Center benchmarks for states include such goals as having sealant programs in at least 25 percent of high-risk schools, providing fluoridated water to 75 percent of residents and reimbursing medical care providers through its state Medicaid program for preventive dental services, among others.

From the outside, the Christina’s Smiles dental clinic looks like a typical semi truck trailer, but inside it has three dental stations with chairs set up, an x-ray area and a space to develop the x-rays, with storage for equipment. The traveling clinic, which has nine stops schedule across the United States, including a stop in Sonoma next October, is decorated with stuffed animals and bright colors to put children at ease. Volunteer dentists provide extensive care for the students that can include root canals, extractions, caps or fillings.

“Once dentists find out about it, they want to give back,” said Diane Stigler of Christina’s Smile. “They find it fun and very rewarding.”

In Salinas, some local dentists offered their time while on Feb. 8 some of the dentists came from other communities in California.

“It is imperative that we have people coordinate the children,” Stigler said, of working with the local schools. “The children all have an appointment – it’s not a walk up so we have to have that partnership.”

On the Friday morning of the clinic, staff members of the Monterey County Migrant Education Program provided transportation for students to the site and facilitated the completion of their paperwork. They provided breakfast snacks for the students with early morning appointments and provided board games for the students who awaited their turn in a dental chair.

Stigler said on one day of the local stop, a dentist gave three root canals to three different students.

“The other day we had a kid who had broken two front teeth,” Stigler said, adding that the dentist was able to provide the child with caps. “His mother sent word that he looked like a normal kid again.”

Vela said he has also heard stories of students who get needed dental work through the clinic having a better time socially in school.

“A student who was afraid to smile because of their teeth or hygiene afterwards really changed their whole attitude and confidence,” Vela said.

Working with local clinics, such as Salud Para La Gente and Clinica de Salud del Valle de Salinas, students are screened between September and November with their needs ranked on a scale from one to four. The free dental clinics sometimes offer free cleanings and screenings, but they do not offer more advanced services for free.

“We refer families to visit doctors or dentists to have a six-month check up,” Vela said. “Agencies do that at a low cost, but for treatment that is more serious such as root canal, extractions and so forth, that usually is a high cost. There are very limited funds for uninsured people who have to rely on charity or other nonprofit types of support to be able to afford it.”

As the coordinator of the migrant education program, Vela said he works with students whose families are employed in the agricultural field and who have experienced a move because of their parents’ work in the last three years. He said the students in his region move with their families in a pattern that takes them from Monterey County to Oxnard, Huron and then Yuma, Arizona, before returning to the Salinas area. His program has limited funds to help students in need of emergency medical care, but he said those funds run out quickly.

“Because of the cost, they will fail to receive treatment that will later cause other issues such as academic problems with missing school or not being attentive at school because of the pain,” Vela said.

When the local clinic packs up to head to the next stop, children who have additional dental needs are referred to a dentist that is part of the “Smile Making Network,” a group of dentists in private practice who treat disadvantaged students on a reduced fee basis year round.