In annual homeless census, counting youth is a challenge 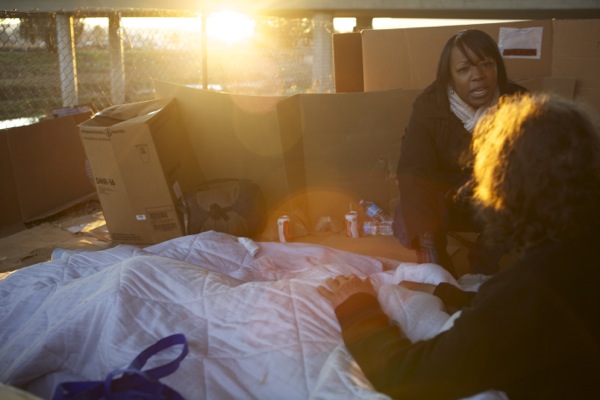 The man pulled back the curtain to reveal the tiny encampment, allowing a small group of outsiders to step through and see what passes for a life lived under an overpass.

“It’s a little rough, but we make due,” said the man, who identified himself as 51-year-old Lamar. He explained how he had dug out the ground beneath the bridge, making room for the small tent, stashes of food, and the collection of belongings in the encampment he shared with his girlfriend.

Lamar said he’s been laid off for two years. He went back to work for 3 months, then broke an ankle 6 months ago. He and his girlfriend, Teresa, who lost her job in retail months ago, have been surviving thanks to the unemployment checks he’s been able to collect.

Their encampment, he said, is frequented by many of the other homeless people they know. Within moments, another homeless man pokes his head in through the curtain, asking if anyone had seen his dog. No one had, they said.

“We try to help out others who aren’t as fortunate as we are,” Lamar said.

It was chilly in the pre-dawn hours in late January, but organizers in Contra Costa County had gathered 120 volunteers to assist with the homeless count.

The count is required by the U.S. Department of Housing and Urban Development (HUD), and the volunteers joined thousands of other communities across the country in conducting the annual census of the homeless.

HUD requires communities to submit the numbers of their homeless each year, and it determines the amount of federal funding the communities receive for homeless programs and services.

In Contra Costa, the volunteers’ task was to do a head count of those people who appeared homeless in their designated area – people sleeping or loitering on park benches, at bus stops, alleyways or in doorways. In Contra Costa, volunteers counted those visible from their vehicles, while more direct interaction with the homeless population is left to the teams of qualified outreach workers who venture to the known encampments of homeless people.

The census happens annually with a “full count,” counting those who are both sheltered and unsheltered, happens every other year, according to Lavonna Martin, the director of the Contra Costa Behavioral Health Homeless Program. She explained that homeless people who’d stayed in homeless shelters, emergency housing, and transitional housing would also be incorporated into the count.

Given the large size of Contra Costa, she said, organizers determined that counting from cars was the best way to cover the most ground.

Martin said that one trend they’ve seen in the last few years is an increase in family homelessness and transitioning youth, that is, young people between the ages of 14 and 24.

“There haven’t been many changes in the economy, and the economy most impacted families,” Martin said. She said that there’s been an increase of the number of transition-age youth, particularly those who are 18-20 years of age, a trend that was “reflective across the country.”

The federal government has taken notice. Last year, the United States Interagency Council on Homelessness, an independent agency within the federal executive branch, unveiled a new framework to better target the homeless youth population. Their goal is to end youth homelessness by the year 2020.

Advocates say it is important to target programs to this population. According to Michelle Covert, director of transitional living services at the Bill Wilson Center in Santa Clara, in the past, the focus has been on homeless families or on the chronically homeless, and that’s where the resources have been devoted.

“Our feeling is that this is a distinct population, especially youth 16-24 that are unaccompanied,” she said. “Without additional resources specifically targeted to them, we’re going to end up waiting until they fall into a chronic category.”

“On a personal level, I feel like it’s horrible to wait for a homeless youth to be a chronically homeless person to qualify for services,” she said. “The longer they’re on the street, the harder it is to get them off.”

Pinpointing the number of homeless youth can be a little difficult. Martin explained that their habits tend to be different from adults – the congregate they’re less likely to look disheveled or be wearing multiple layers “There’s a stigma associated with being homeless, and oftentimes young people don’t want to put themselves out there to their peers.”

To better understand this youth population in Contra Costa, Martin and her team held focus groups in homeless youth shelters, asking the younger people where they should look to find other homeless youths.

“Knowing that the federal government wants an increased focus on understanding the scope of youth homelessness…we have far more youth eyes out there,” she said. “This is helping them get a baseline to begin attacking the problem.”

Rather than an early morning count, organizers recruited volunteers – many of them homeless youth themselves – to hit the streets of San Jose and surrounding areas in the afternoon, the day before the broader count was scheduled to occur.

“The patterns of how youth travel and how you find them are, we figured, was different than homeless adults,” Covert said.

“Homeless youth are more invisible,” she said. “They’re good at hiding, they hide under freeways, or even in freeways or in abandoned buildings…in the afternoon and evenings, they’ll be out in parks on the buses, in the malls, in hotspots where we think they hang out.”

Covert also deployed teams of youth who had experienced homelessness to assist with the count, relying on their expertise to identify other homeless youth.

“It’s far from scientific, but its our best guess, based on their own personal experience,” she said.

In annual homeless census, counting youth is a challenge