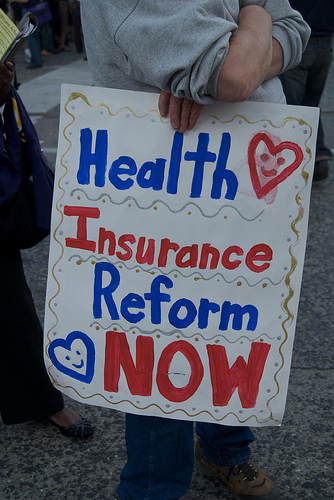 John Michaels* hasn’t seen a doctor or a dentist since 2001 – because that’s the last time he had a job that offers health insurance. He works as a freelance video production tech – and his income varies widely – between $30,000 and $50,000 a year. He says he can’t afford to buy health insurance as an individual on the open market, where basic policies can cost hundreds of dollars a month.

John has a nasty cyst inside his wrist – but he just wears a brace and works through the pain because he can’t afford corrective surgery. He says, “The cyst fills up with fluid between the joints. So the more activity you do the more it swells up and that’s when it pushes my bones apart and it hurts…I figure it’d cost probably about 10 to 20 grand for surgery because (my cyst) actually spiders through the bones in my hand.“

He adds, “I’m kind of resolved to the fact that it’s something that I’m going to have to live with.”

John’s story is not uncommon in the Coachella Valley. A new study by the Health Access Resource Center (HARC) shows that 28.6% of residents 18-64 are uninsured. That’s compared to 21.3% nationwide, according to the 2011 National Health Interview Survey (NHIS). That same survey showed that 1 in 5 Californians under age 65 lack health insurance and 9.2% of children
in the Golden State are uninsured.

The data show that the problem is getting worse. The HARC survey also analyzed the numbers for all adults in the Coachella Valley (including those over 65) – and found that 21% are uninsured. That’s up from 20.5% in 2010 and it’s six points higher than it was in 2007, before the recession hit.

Overall, HARC concluded that, “Lack of insurance compromises the health of the uninsured because they receive less preventive care, are diagnosed at more advanced disease stages, and once diagnosed, tend to receive less therapeutic care and have higher mortality rates than insured individuals. “

For HARC’s CEO Eileen Packer, the issue is personal: ““We want to be taking care of ourselves by having the tests. I can tell you that my mammogram caught my breast cancer and I wouldn’t be alive today if I hadn’t done it. So it does make a difference.”

The Health Assessment Resource Center’s mission is to unearth the hard data about health in Eastern Riverside County. They wanted to find out more about uninsured adults – specifically, how do they compare with people who do have health insurance? HARC asked a random sample of people with landlines and cell phones. The results are thought provoking.

The study found 21% of people over 18 years old in Eastern Riverside County lack health care coverage – more than 106,000 people. Of that group, slightly more are White (44%), than Hispanic/Latino (42%). More than half are men (57%). More than a half (58%) are under 34 years old, presumably taking their chances while they’re still relatively young and healthy. Another 20% are 35-44. Because of Medicare, less than 1% of senior citizens are uninsured.

You might think that a good education would lead to a good job with health insurance. But these days, finishing college or even graduate school is no guarantee: the study showed that, together, those grads make up 17% of the uninsured. But that’s a lot better than those who dropped: those who finished some college are 30% of the total uninsured. Another 35% of the total uninsured stopped after getting a high school diploma or GED. The final 19% never finished high school.

The data show that visits to the dentist are considered a luxury for the uninsured: only about 25% have seen a dentist in the past year.

HARC concluded that people without insurance are significantly less likely to get preventive care. As a result they miss the chance to get an early diagnosis and are less likely to beat the disease. A recent study done by the American Cancer Society underlines this point: researchers found that women without health insurance are significantly more likely to be diagnosed with late-stage cervical cancer, especially as they get older.

You might think that people without insurance would be more careful about their health habits, since most cannot afford to get sick. But the opposite is true, at least where smoking is concerned.

It turns out that 29% of the uninsured smoke on a regular basis. That’s more than twice the rate (12%) of smokers among people who have insurance. The uninsured are also less likely to do cardiovascular exercise.

John Michaels, for one, is proud that he was finally able to quit smoking last year. He says he’s relieved that the Supreme Court upheld the Affordable Care Act (ACA) because insurance companies will no longer be able to reject people like him who have a preexisting condition. And, he says, he hopes to be able to find reasonable rates for health insurance once California’s Health Exchange opens up in 2014.