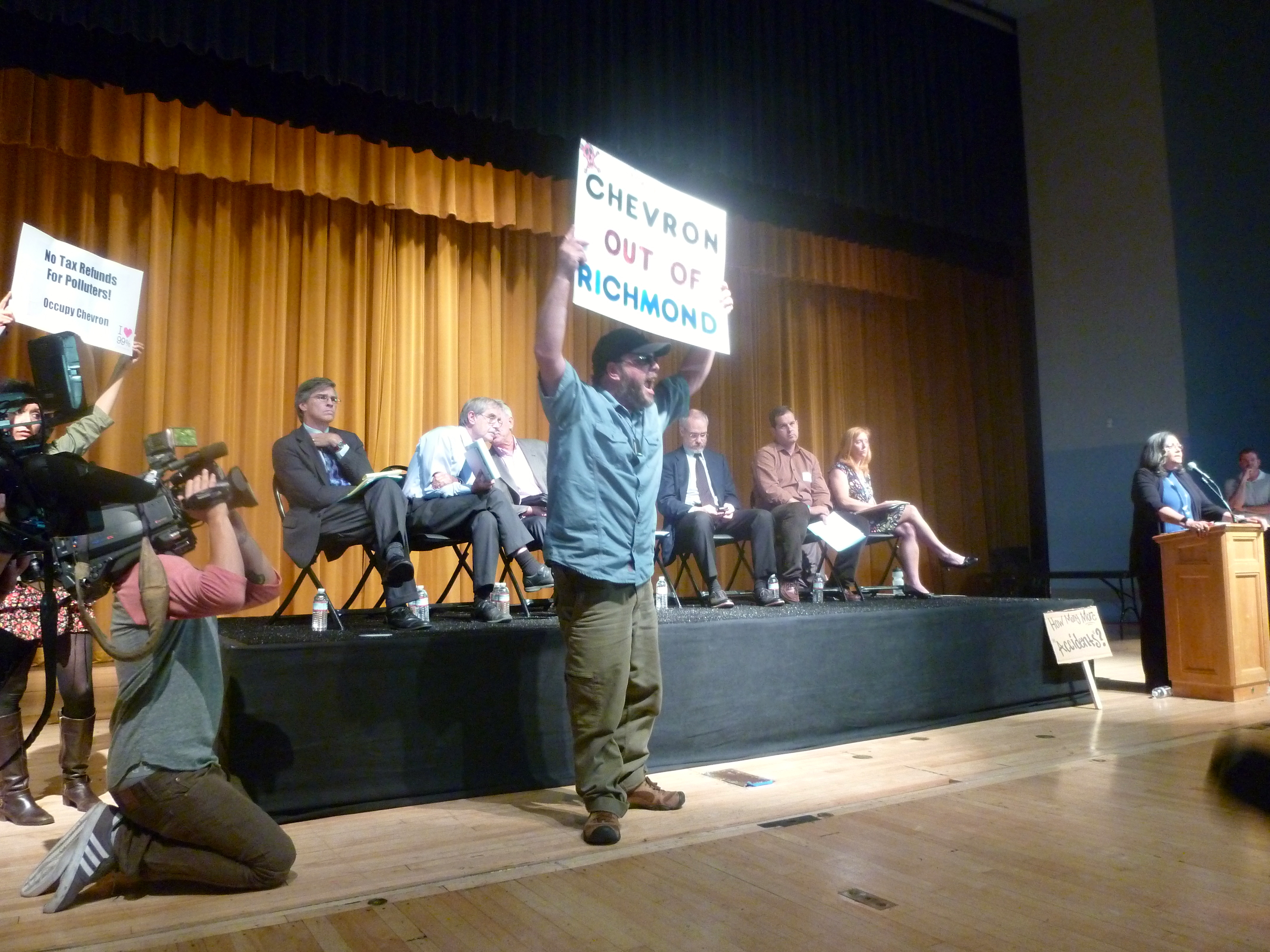 Chevron, Contra Costa County and Richmond city officials addressed an angry crowd of residents at a town hall meeting in Richmond earlier this week over growing concerns from Monday’s Chevron refinery fire. East Bay residents filled the floor of the Civic Center gymnasium to demand transparency over what triggered the fire and the resulting health impacts.

After Monday night’s explosion sent plumes of black smoke across the East Bay, around a thousand people went to emergency rooms complaining of dizziness and shortness of breath. More than 130,000 local residents were directed to stay in their homes and keep their windows closed.

Refinery General Manager Nigel Hearne repeatedly apologized to the crowd throughout the night and promised that he’s working to pinpoint the exact cause of the blaze.

“We are doing the right thing for our neighbors in this community to make sure everyone’s health and well-being is being adequately addressed,” he said, followed by a wave of boos from the crowd.

Before Tuesday night’s meeting, Chevron officials announced they were setting up claims program and promise to pay for any health expenses and property damage that resulted from the fire and smoke.

“Just because no one was injured enough to be admitted to the hospital, doesn’t mean that this is OK. That this is acceptable,” said Dr. Wendel Brunner, Director of Public Health for Contra Costa Health Services. Of the nearly 1,000 people that reported to the two emergency rooms in West County, Richmond, none had been injured enough to be admitted into the hospital, he said. Still, addressing the crowd he said, “Just because those people who have gotten symptoms from this will recover, mostly in the next day or two, it doesn’t mean that this exposure is OK.”

The main impact on health from Monday night’s explosion is the particulate matter from the plume of smoke. Shortly after the explosion, Jeff McCay, Deputy Exective Officer of Bay Area Air Quality Management District and his team were on the scene to help first responders collect air quality samples. When they got there, they found the ground levels of 23 compounds were similar to ambient conditions.

McCay said the samples that take longer to analyze will show more comprehensive results. He directed residents to go to a website listing the levels of 23 compounds of particulate matter detected.

But residents at the meeting complained that the website was more confusing than helpful. “That doesn’t tell us anything,” one person shouted from the crowd.

Fine particulate matter (PM2.5) are air pollutants that can seriously affect a person’s health when levels in the air are high. These fine particles primarily come from car, truck and bus exhausts and other operations that involve the burning of fuels such as wood, heating oil or coal.

Explosions like Monday’s blaze at the Chevron plant could result in high levels of particulate matter, which can travel deeply into the respiratory tract, reaching the lungs. Exposure to fine particles can cause short-term health effects such as eye, nose, throat and lung irritation, coughing, sneezing, runny nose, shortness of breath, “and in particular for those who have underlying lung disease,” Wendel said, “and there’s quite a number here in Richmond.”

With nearly 5,000 new cases of cancer a year, Contra Costa County is above the state average when it comes to new cancer cases. About 1,200 of cancer-related deaths in the county are from cancer of the lung, the leading cancer death in the county after colorectal cancer.

Other top concerns voiced by residents Tuesday night included not being adequately warned to take shelter. “I think it’s an outrage that the warning system didn’t work,” Roger Kim, Executive Director of Asian Pacific Environmental Network said, adding that several members of his group reported not receiving any warning through the county’s alarm system. “They heard the sirens and saw the big plume of smoke but were not properly warned about what was actually happening,” he said.

But county and city officials said the emergency system was successfully executed. Katherine Hern with the Community Warning System for Contra Costa said Chevron pushed a button activating the alert and sounding sirens every 30 minutes shortly after the explosion. Hern and her team then began alerting the public through social media, telephone calls and the emergency alert system to take shelter.

Halfway through the town hall meeting, members of Urban Tilth, an urban farming organization in Richmond, held a demonstration in front of the auditorium holding wilted vegetables from their gardens. They said it’s unsafe to eat and would have to throw it out.

Not all of the comments from residents berated the government and refinery officials. Some even praised Chevron’s presence in Richmond, noting that it’s one of the city’s biggest benefactors in providing employment and education.

“Without Chevron in Richmond, we’d be just like Vallejo — broke,” Richmond resident Antwon Cloird said at the meeting, referring to a nearby city that filed for bankruptcy in 2008. He also noted Richmond’s persistently high rates of homicide. “Where are you people when that mayor sits and tells us that we need to do this and our kids are dying out here?” he asked. “Didn’t nobody die last night. Won’t you give them credit for that?”

Still, most of the speakers said the economic benefits of the Chevron cannot undercut the detrimental health effects of events like Monday’s explosion.

Kim and his group APEN want to put extra pressure on Chevron to use cleaner practices. “The long-term exposure that exists everyday here in Richmond has already resulted in asthma,” he said before the meeting outside the Richmond Civic Center.

Hearne said he promises to not make Tuesday’s meeting the first or last community event. “We will continue to work with the community and city officials to address our neighbors’ concerns,” he said.

Residents can call 866-260-7881 or visit http://cchealth.org/ for updates and to learn more about claims and health impacts.