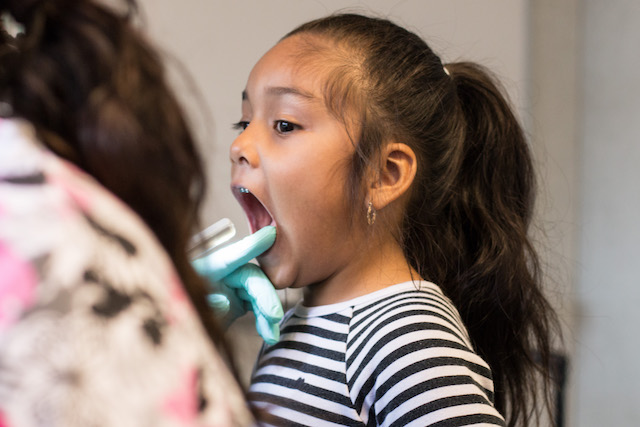 The lack of dentists and specialists in rural Californian counties is leading to high rates of tooth decay and preventable dental emergencies, especially among low-income residents.

Someone living in Eureka would have to drive 3 hours to Redding or 4 hours to Santa Rosa to get to an oral surgeon who accepts Medi-Cal.

There are no dentists in Alpine County, and the nearest dentist accepting Medi-Cal is at the Washoe Tribal Health Center in Nevada, a half-hour away. Medicare patients can go to a dentist 28 miles away in South Lake Tahoe, but that dentist stopped accepting Medi-Cal patients from the county because of the high rate of no-shows.

If they can’t get into either of those offices, patients have to make a 2.5-hour trek to Diamond Springs.

A 2006 survey conducted in four northern Californian rural counties found that this combination of low access and low incomes hurts oral health. More than 28 percent of respondents living at or below the federal poverty level hadn’t been to a dentist in five or more years. Many of them had never seen a dentist. Only 40% of respondents had been to a dentist in the previous year- the recommended length of time between visits.

This is due in large part to a lack of dentists and specialists in the area, especially those who accept Medi-Cal. For example, in the population center of McKinleyville in Humbolt County, there is one dentist for every 4,539 people.

The problem is even worse for those relying on the state’s health care program for low-income people. There’s only one dentist accepting Medi-Cal for every 71,830 county residents.

The survey found that rural counties in northern California have the highest rate of emergency room and urgent care visits for preventable dental issues than the rest of the state.

“In the ER we can give them antibiotics and pain medication but we aren’t really trained for pulling teeth,” says Dr. Jessica Van Arsdale, who practices medicine in Humbolt County. She’s also the Director of Health Research at the California Center for Rural Policy at Humbolt State University.

The shortage of dentists in rural areas can be linked to a few factors. Often a dentist may be willing to practice in a rural area, Van Arsdale says, but their spouse or family may not be able to find as many opportunities in the region.

There are also financial deterrents. It often costs more to practice in rural areas, Van Arsdale says, but both public and private insurance reimbursement rates are lower than in urban areas.

“Alpine county only has 1,200 people – probably not a great practice location for a dentist,” said Jon Chin, acting chief of Medi-Cal dental services.

The higher poverty rates in rural areas make getting health care hard. “The challenge is trying to get people the care they need when it may not exist in the area, or specialists may not accept a patient’s insurance,” Van Arsdale says.

She recommends practicing in rural areas because of the beauty and the interconnectedness of the population. “You get to know people,” Van Arsdale says. “You get to feel more connected to the community and feel like you are providing an essential service.”

There is only one doctor and two nurses to meet the medical needs of the population of Alpine County. “We are a teeny tiny little public health department,” says county nurse Lynette Bennett.

The doctor’s office is open twice a week, but he is practically always on call. Bennett spends one day a week at the only school in the county tending to its 91 students. Other days she goes to senior potlucks or the daycare center to provide vaccinations. Over her ten years working there, she’s watched the kids of the county grow up and graduate.

The state cut Medi-Cal funding for non-emergency dental procedures for adults in July of 2009. By fall the cuts had caused $30 million in lost revenue, 77 dental providers were laid off and two dental clinics closed statewide, according to the California Primary Care Association survey.

To increase the number of dentists practicing in rural areas, Medi-Cal funding must be reinstated and the reimbursement rates increased, says Van Arsdale. “California has some of lowest levels anyway.”

But until there are more dentists in rural areas, there are only a few options for patients to get their oral care needs met.

Van Arsdale suggests funding tele-dentistry programs, where dental hygienists are able to transmit oral photos and records to an overseeing dentist. This could also be a way to provide specialist consultations to remote areas. She also proposes training mid-level dental professionals such as dental hygienists or medical professionals to do more advanced dental procedures.

A mobile dental van used to come to Alpine County to serve the residents. On their final visit, before funding was cut two years ago, they taught Bennett and the county doctor how to apply fluoride varnish for the children of the county. Bennett and the doctor now provide that service twice a year.

Mobile dental vans have proven effective in reaching people in rural populations, Van Arsdale says. In Yuba County, there is only one dentist for every 9,173 people. Fortunately, there are more dentists in nearby Sutter County, but transportation challenges for much of the rural county means that many residents can’t get to a dentist.

Five years ago the school district was able to get funding for the Happy Tooth Mobile, a mobile dental RV serving children from birth to age 18. Throughout the school year the pop-out RV travels a 25-mile route stopping at six schools along the way for 6-8 weeks each.

During that time they pull kids out of school, assess their oral health and treat what they can. They provide most services onsite, and only refer kids to specialists when they have extreme tooth decay or other conditions requiring oral conscious sedation for dental procedures.

“Because they’re little, you just want to get it all done at once so as not to traumatize them,” says Ronda Bowers, Happy Tooth Mobile coordinator. “The challenge there is transportation.”

Eighty percent of the kids in the school district are on free or reduced lunch. Many of them are covered by Medi-Cal. Most of their other patients aren’t covered because they are undocumented immigrants. Those patients pay based on a sliding scale, often a fee of $10 a visit.

When surveyed, 60 percent of the families who come to the Happy Tooth Mobile say they wouldn’t have taken their child to a dentist otherwise.

“We never can see everybody. The families follow us to the next stop,” Bowers says.

“If they are crying or scared he doesn’t get ruffled,” Bowers said. “Other dentists might be thrown off by that.”

The staff of the Happy Tooth Mobile also provides education to families about good oral health practices in English, Spanish and Hmong.

“We are trying to shatter the myth that baby teeth don’t matter,” Bowers said. “We are trying to teach families that poor oral health is completely preventable and contagious within families.”

But Bowers says the early intervention is helping. She sees families come in with multiple children with various degrees of poor oral health. Once they get the whole family committed to oral health, they see the condition of the younger children’s teeth begin to improve.

Alpine County found one more solution to the fact that there are no dentists in the 727 square miles within the county borders and no mobile van paying them visits. The public health department operates a dial-a-ride program four days a week. The driver will take any resident to doctor and dentist appointments as far as two and a half hours away, weather permitting.