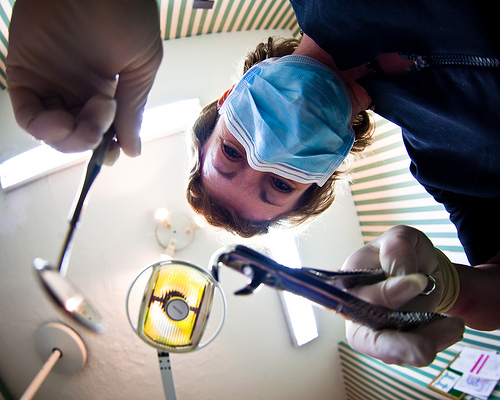 Roughly three million poor and disabled Californians had their coverage for dental services cut three years ago, and community dental clinics have struggled to cover preventative services ever since.

“It was not something we wanted to do,” says Robert Isman, a consultant with the Dental Program for California Department of Health Services. “We knew that there would be repercussions and there have been.

Dental services aren’t mandated under the federal Medicaid program and California, with a program called Denti-Cal, was one once of the few states to cover non-emergency services for adults. But with the state budget crisis, legislators cut the non-mandatory services.

Community clinics are quick to offer painful examples of clients who need help with their teeth since their benefits were slashed.

For instance, an elderly patient at Asian Health Services in Oakland’s Chinatown had all his teeth pulled so he could get dentures. Then the Denti-Cal cuts went into effect, and dentures were no longer covered. He was left with no replacement teeth.

His daughter called Huong Le, AHS’s Dental Director to ask for help. “He was losing weight. He couldn’t eat because he didn’t have his teeth – the physicians were really concerned about his health condition,” Le said.

Le applied to Asian Health Service’s Community Care Fund and was able to get the money for his dentures. But the fund, made up mostly of donations from AHS staff, covers medical procedures as well oral health. There isn’t enough to pay for dental care for everyone. “We still have to be able to keep the doors open,” Le said.

To cope with the Denti-Cal cuts, AHS started charging for their services using a sliding scale. Most of their patients qualify for 75 percent of their fees to be subsidized from AHS general funds.

But Le says many patients still can’t afford the $80 it costs for a filling in a small cavity.

Medi-Cal benefits still cover the cost of pulling a tooth.

“Replacing a tooth is much harder, much more expensive—not to mention all the pain and suffering,” Le said. “So if the state would pay for the filling at the beginning when it is a much smaller region, then it would be much cheaper.”

Community clinics also struggle to find specialists to perform more advanced procedures at a non-profit rate. Asian Health Services opened a dental clinic in 2003, and for the first three years they didn’t have any specialists.

“So our general dentists, including myself, had to do everything,” Le said. “When we encountered difficult cases, we had to refer the patients out to the private specialists in town, and nobody went because they couldn’t afford it. So then they all came back to us without having dealt with the problems. So that was very frustrating.”

Le used her network through the Alameda County Dental Society to connect with specialists in the area. In the last six years, she hired five specialists who come in on a part-time basis. “They have their own private practice where they see the other type of patients—the ones that pay,” said Le.

But Le still struggles to book procedures for patients because the specialists are only at the clinic part time. Recently an HIV-positive patient was very upset because he needed a root canal but couldn’t get an appointment for the procedure for six months. Le is trying to work with the clinic’s endodontist (a root canal specialist) to add a day to their schedule to fit the patient in.

La Clinica De La Raza also struggles to provide all services at their six dental clinics and four mobile units. “In our clinics it is very hard to attract specialists because it’s not a lot of pay and it’s a lot of work,” said Teresita Churchill, Operations Administrator in the Office of the Dental Director.

La Clinica is also compensating for the Medi-Cal cuts by using a sliding scale, where patients pay 25 percent of the cost of services. “But if they cannot afford it, we cannot do it,” said Churchill. They also apply for the few grants available for providing dental care.

“We have some programs for the homeless and Alameda County has good programs,” Churchill said. “But the need is bigger than the actual help that we receive.”

That need is popping up throughout the medical safety net. Arlene Glube coordinates oral health programs for children in Los Angeles County for the Center for Oral Health but still gets a lot of calls from people looking for adult care.

“People are looking desperately for anything with oral health,” Glube said. “They beg for adult care and there is none.”

A study from the California Healthcare Foundation looked at the impacts of the cuts in the year following their implementation. The study found a $6 million increase in the use of hospitals and emergency rooms for dental issues that could have been dealt with on an outpatient basis.

Huong Le says when ER doctors treat patients’ dental issues, the problem continues. “What they usually get would be maybe prescriptions for pain medication, for antibiotics, and then they go away,” Le said. “That’s not treating it. That’s not even managing it.”

The increase in emergency visits following the Denti-Cal cuts was primarily among blind and disabled adults. The Medi-Cal dental services branch is now partnering with The Department of Developmental Services to restore funding to what it was for those patients. As of Jan. 13, 2012, they restored coverage to 200,000 adults.

Isman says a silver lining in the cuts was an increase in children’s visits to the dentist. “Clinics and private dentists rely on revenue from the dental program, they compensated by seeing more kids,” said Isman.

Huong Le points out that it is important to make a connection between dental care and medical care. “Oral health is an integral part of primary health care,” Le said. “The mouth is the portal of entry—you know everything goes through the mouth before it gets to other parts of the body.”

Yet, even as California leads the way in implementing the Affordable Care Act, there are no indications that healthcare reform will increase dental coverage. The health benefit exchange is legally required to include health plans that provide dental coverage for children. Beyond that there is no guarantee that the exchange will include dental plans.

State Senator Alex Padilla is sponsoring SB 694, which would establish an office of oral health – something a majority of states in the US already have. The bill would create a state dental director to study dental coverage throughout the state. It would not provide funding to improve dental coverage. The bill passed the state Senate and has now gone to the Assembly.

“Everything is still kind of up in the air,” Le said. “If its not spelled out than we can’t count on it.”

Though much of the clinic’s focus is on treating acute problems, prevention continues to be the biggest challenge in oral health.

“Unfortunately the patients come in with so many problems that we feel like we are too busy putting out a fire that we don’t have time to be proactive in educating our patients,” Le said.

Le says home care is key to good oral health. She recommends avoiding soda and sugary snacks. As many people already know, brushing and flossing every day is an important way to maintain oral health. “So that’s what we’d like people to do,” Le said. “Just take some of these simple steps to prevent dental problems.”