Violence can alter a child’s DNA 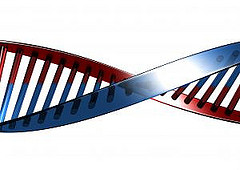 Researchers and public health officials have known that the basis for adult health lies largely in childhood. The environment in which one is raised affects how healthy that person will be as they age. New research suggests that children who are repeatedly exposed to violence appear to be aging at a faster rate.

Researchers at Duke University and King’s College London report that the DNA of 10-year-olds who have experienced violence show signs of the wear and tear associated with aging.

Scientists determined the children’s DNA had shorter age-marker sequences called telomeres. Telomeres are special sequences of DNA found at the ends of chromosomes. Like the plastic tips of shoelaces, telomeres keep strands of DNA from unraveling.

“We know from studies on adults that stress is causing acceleration of telomere erosion, but we didn’t know that it can also happen in children,” said Idan Shalev, a post doctorate fellow at Duke University and one of the researchers involved in the study.

Telomere erosion is associated with age-related disease, cancer, and high mortality rate. It is not, however, necessarily the cause of any of these problems, Shalev added.

The study used a subsample of 236 participants in a larger, Environmental-Risk (E-Risk) study that tracks the development of a group of over 2,000 children born in England and Wales in 1994-1995. The families involved represent a wide range of socioeconomic status and health in the general population. Researchers collected DNA samples from the children at five and ten years old and measured the mean telomere length of all the chromosomes at each age. Of the 236 child participants, 42% had experienced violence.

Researchers assessed three types of exposure to violence in children: domestic violence between the mother and her partner, frequent bullying, and physical abuse to the child. Cumulative effects of violence had the most impact; children who had experienced more than one type of violence showed the greatest telomere erosion.

Dr. Elissa Epel also conducts research on the cellular aging of children at the Center for Health & Community at the University of California, San Francisco, and she said that many influences can shape a person’s health between childhood and adulthood. While factors like low income and poor diet have been associated with early aging, the question remained of whether traumatic stress could impact telomeres in children.

She said that this information should be a huge warning about the importance of protecting children from violence. “Rather than assuming children are biologically resilient given their youth, such exposures leave imprints that may not just go away as we age,” she said.

Dr. Epel said that this study demonstrates the possibility that faster telomere erosion could put those subjects on a more rapid trajectory of aging and early onset of disease as adults.

Researchers will collect DNA samples for assessment again when the participants reach the age of eighteen.

Violence can alter a child’s DNA