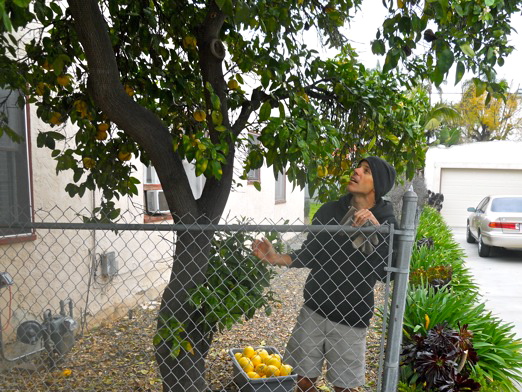 Streets take on the look of an unruly Eden in the leafier parts of San Diego. Lawns, large lots, even sidewalk medians are interlaced with fruiting varieties of trees, palm trees and lush vegetation. Sometimes the abundance of common produce – lemons, oranges, avocados – can overwhelm homeowners.

So locavores and food security advocates have teamed up with a growing number of volunteers, matching overburdened homeowners with pickers eager to help haul the excess produce to food pantries throughout San Diego County.

It’s called gleaning. The tradition, dating back to the Old Testament, is gaining adherents in San Diego. They harvest to help social services agencies combat hunger in low-income neighborhoods, with the understanding that fresh produce fit for human consumption could easily be prevented from rotting away.

Since 2010, Philip Dunn has coordinated the efforts of a small squad of urban gleaners living in the downtown neighborhoods of San Diego. While pedaling through his North Park neighborhood, he noticed the large number of untended trees laden with fruit falling onto lawns and yards only to rot.

“It’s frustrating to know that food goes to waste that people could use,” said Dunn. Preliminary research indicated no agency or group collected the falling fruit, so he decided he would do it himself, he said.

Now, Dunn coordinates the efforts urban gleaners ready to knock on doors and spread the word among activists focused on sustainability and food security issues.

Up to 30% of all the food produced in the world is wasted or lost due to spoilage and the inability to deliver food where it’s needed, according to a report published by the Food and Agriculture Organization of the United Nations.

On a blustery March, day Dunn’s simple idea reveals how even small acts of can yield surprising results. Dunn and two volunteers equipped with borrowed equipment and zeal manage to pick 275 pounds of fresh grapefruit from a single tree in 90 minutes – without so much as breaking a sweat.

They removed a season’s worth of grapefruit that would otherwise have gone to waste, and in the process relieved a couple raising three young children of one more chore.

Dunn’s group, Harvesting San Diego, matches similar efforts operating independently of each other in various parts of San Diego and around the country. It includes activists who link people with too much produce with food banks and other organizations.

The impulse to glean coincides with the recession and the alarming number of households with children facing hunger at some point during the year, totaling 6.8 million in the U.S., according to a survey conducted by the U.S. Department of Agriculture published in 2009.

Today, Dunn is delivering a carload of grapefruit to a nearby food pantry run by the International Rescue Committee (IRC), a nonprofit organization located in City Heights. The IRC’s food pantry is one of 23 operating in the community, where the need for nourishing food can be acute.

The IRC distributes food to up to 240 families per month, according to Anchi Mei, a program manager. It also serves as an emergency stop for newly arrived refugee families tangled in bureaucratic red tape, who otherwise might be stranded without basic necessities

“They’re off the plane and there’s a few weeks before a check is coming through. We need emergency food in those cases,” she said.

Though the program is relatively small, in terms of helping low-income families stretch their food budgets, Mei says, “the gleaning project has been wonderful.”

Gleaning belongs to a wider set of farming practices embraced in urban San Diego, as beekeepers, urban farmers, and chicken wranglers, once outliers in the community, are becoming decidedly more mainstream. The city of San Diego recently eased restrictions governing community gardens, reflecting increased concerns among residents about where their food comes from, and helping to revive time-honored traditions, such as gleaning, for contemporary times.