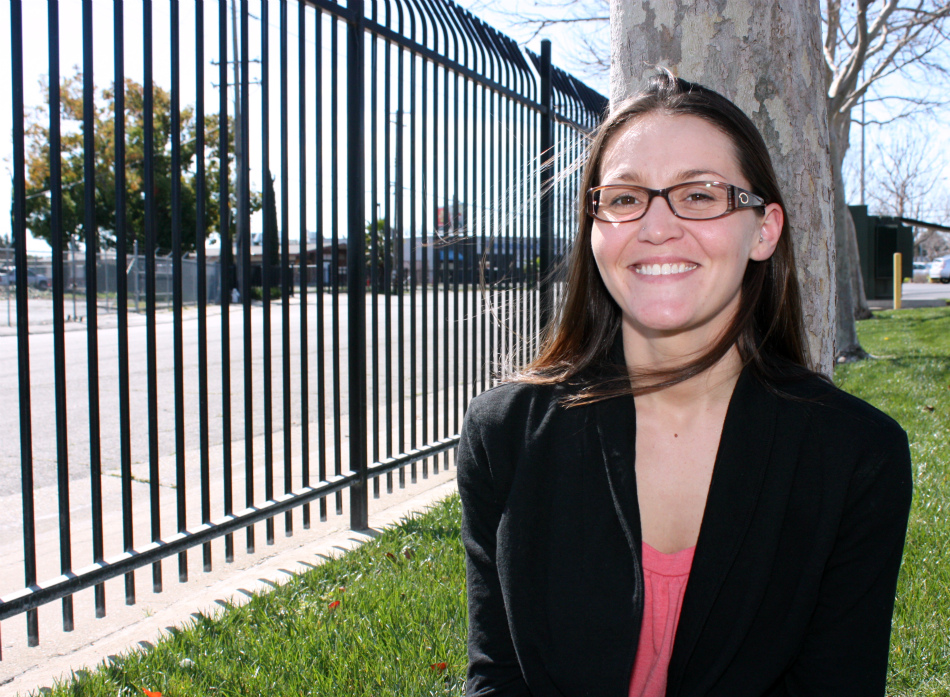 The first time Jaime Carr called the cops on herself, she was in the middle of a psychotic delusion. It was early 2007 and pop star Britney Spears was in the news for having shaved her head. Convinced she had morphed into the famous singer, Carr feared that the gardener, mail carrier and upstairs neighbors were watching her every move. Even the paparazzi, she thought, were hiding out, waiting to snap her picture.

When the cops arrived at her house in Davis, they tackled her in her living room and tied up her arms and feet, saying it was for her own protection. “They were like, ‘Yeah, this f—ing girl is crazy,’” recalled Carr, 29. (Her name was changed for this article to protect her privacy.) “I felt they hated me and looked at me with pure disgust.”

Carr is one of 2.2 million Californians living with a mental illness, according to a 2011 report by the UCLA Center for Health Policy Research. Like many others, she faces stigma on a daily basis and in most areas of her life: in parenting, in finding work, in dealing with law enforcement and in seeking treatment for bipolar disorder and substance abuse.

Nearly half of the adults in a national survey said they were unwilling to socialize with, work with, or live near someone with a mental illness. People living with mental illness often say the stigma and discrimination they face can be worse than the illness itself.

In Sacramento County — where Carr spent several years cycling in and out of treatment facilities — the Department of Health and Human Services recently launched Stop Stigma Sacramento, a million-dollar, yearlong anti-stigma program and ad campaign. The program aims to change negative attitudes and false beliefs about mental illness with the help of billboards, radio spots, a speakers’ bureau and a dedicated, multilingual website.

“The underlying message [of the campaign] is everyday people living with mental illness,” said Frances Freitas, the program’s director and a licensed clinical social worker at the County’s Division of Behavioral Health Services. The program and campaign ads are paid for with funds from the Mental Health Services Act, which California voters passed in 2004 under the name Prop 63.

Senator Darrell Steinberg authored Prop 63 in his days as an assemblyman, following six years on the Sacramento City Council, during which he noticed that unchecked mental illness was the underlying cause of homelessness in the city.

Steinberg said 80 percent of the money raised by Proposition 63 originally went for treatment, with just 20 percent going for prevention. But the goal is to some day reverse those numbers.

“We can only do that if we are conscious about busting (the) stigma associated with mental health,” he said. “This campaign is just the beginning.”

The campaign’s slogan — “Mental Illness: It’s not always what you think” — is printed in bold letters at the bottom of ads featuring “normal-looking” people: a war veteran with bipolar disorder, a church pastor with depression, a farmer with post-traumatic stress disorder and an English teacher with anxiety, all from different age groups and ethnicities.

“Stigma exists on many levels,” said Freitas, pointing out that one in four adults will experience a mental disorder in their lifetime, as will one in five children. An estimated 355,000 people with a diagnosable mental illness live in Sacramento County alone, but only a third will seek treatment due to stigma. “It’s culturally widespread, it’s societal, it’s familial and it’s personally internalized,” she said.

Discrimination, shame, ridicule and stigma are all part of the same puzzle for people with mental illness, who are often thought to be incompetent, violent or psychotic — all the time, according to Carr. “People’s assumptions – and mine was before, too – is that if you have a mental health disorder, you’re always nuts,” she explained. “Not many people experience psychosis, but when you do, it’s very short-lived and you can go on to be a very high-functioning person.”

The media are regularly blamed for public misconceptions about mental health. The 2001 feature film “A Beautiful Mind,” about a prominent mathematician with schizophrenia who eventually wins the Nobel Prize in Economics, has been touted by mental health experts as one of the best media representations of someone living with a mental illness. But positive portrayals, they say, are all too rare.

“It creates more stigma every time the media shows a murderer or someone that’s violent,” said Andrea Hillerman-Crook, the Adult Consumer Advocate at Mental Health America of Northern California and the manager of its peer partner program. Diagnosed with bipolar disorder 15 years ago, Hillerman-Crook now lives in remission. “I think it’s important to include those stats that mentally ill people are more likely to be victims of a crime.”

In the early stages of helping to create the Stop Stigma Sacramento ad campaign, Stephanie Yoder of Edelman Public Relations started by conducting a media audit to see how mental illness was already being covered in the news. “Ninety-plus percent of the stories were about someone who had done something [violent],” she said. “So, when you’re a person who has a mental health issue, you’re thinking, ‘Where’s the story of hope that I can attain?’”

Carr’s first undiagnosed manic episode struck when she was just six months shy and two classes short of graduating from UC Davis with a degree in sociology. In this manic state, life felt suddenly amazing. Four-in-the-morning workouts, hard drinking at the bars and atypical one-night stands with random men seemed universal – until the termination of a brief romance triggered a deep depression, forcing her to sleep for 18-hour days and skip classes.

“When I did go to class, I wasn’t following the professor,” Carr said. “My notes had become all disheveled, whereas they used to be totally organized.”

Even with a glowing transcript, she ended up flunking out of Davis entirely. Undiagnosed and without a degree, she moved back to her Walnut Creek hometown to live with her drug- and alcohol-addicted mother, taking up residence in a dark, windowless room. “I’d get up to pee and eat an apple and then just crawl back in my hole,” she said.

After several hospitalizations, Carr began haunting the bars of Walnut Creek, where she fell in with people who insisted that using small amounts of cocaine each night was no big deal. She got addicted, becoming part of the roughly 50 percent of people with severe mental illness who abuse drugs and alcohol.

“Drugs are just like bipolar disorder,” Carr said. “That mania is like a drug and that crash is horrible. I was just doing it another way.”

The addiction intensified her delusions, which could surface on either end of the bipolar spectrum, from manic to depressed. Any bit of stimulation — the sound of helicopters flying overhead or a radio news report about a bipolar pop star — could drive her farther away from reality. It’s a frightening feeling, she said.

She eventually met a therapist at Kaiser Permanente who suggested she relocate to Los Angeles for an intensive, 90-day drug rehab program. While there, she got clean and married a man with whom she eventually had two children. But her husband struggled with his own addictions and diagnoses of posttraumatic stress and bipolar disorder.

When Carr left him to his recovery, he retaliated by winning an initial custody hearing on the grounds that her bipolar disorder made her an unfit mother.

“The judge said, ‘You’re bipolar? Kids are gone. Weekend visitation. Supervised,’ ” recalled Carr, but the temporary ruling was tossed out when her husband missed a crucial follow-up date in court. Although still married, she moved back to Northern California, eventually settling in Rocklin, to raise her sons — Kelly, now 2 and Connor, 9 months — alone.

But the $686 a month she collected in Social Security Disability Insurance wasn’t enough to make ends meet as a newly single mother.

In February 2011, she found a job in Sacramento as a peer advocate for Mental Health America. It was one of the few jobs she had applied for where she didn’t feel the need to hide her bipolar diagnosis during the interview.

“Sharing your diagnosis when you’re not sure how people will react is really hard because I know how people are and they treat you differently,” said Hillerman-Crook, who hired Carr for the full-time position and is now her supervisor. “Because of the Mental Health Services Act, every county in the state has individuals living in recovery as part of their management teams.”

Today, Carr guides up to 20 of her peers, many of them fresh from the facilities she herself used to frequent, toward mental health recovery by connecting them to tools and services. She does this while sharing her own history with bipolar disorder and substance abuse.

“It’s all come to this weird full circle,” Carr said.

When Hillerman-Crook told Carr of the organization’s plans to start training Sacramento area sheriffs and police officers in mental health sensitivity and stigma reduction, Carr was chosen for the side gig because of her personal experiences with law enforcement. For the past year, she’s been facilitating once-weekly trainings.

“Now, I’m able to share my story with cops, and have these cops – who, in my mind, were just the biggest a–holes in the world – raise their hand and say, ‘I had to call the cops on my son because he has bipolar disorder.’ I mean, a cop saying that!” Carr said.

Carr’s life does seem to have come full circle.

She has been clean and sober for almost two years, thanks in part to the 12-step programs Alcoholics Anonymous, Cocaine Anonymous and Al-Anon. In the past, she needed as many as nine prescription drugs at once to treat her bipolar disorder; today, she takes only Trileptal, a mood stabilizer. And although she has yet to finish her degree in sociology, her experiences since her days as an overachieving undergrad have placed her squarely in the path of social work.

But Carr is just one example of someone living in recovery and tackling the stigma of mental illness, Freitas said. “We can bring forth a number of articulate, bright, employed people who’ve had significant disruptions in their life and now are thriving.”

• Call 211 for various social services in counties across the State of California. (http://www.211.org)