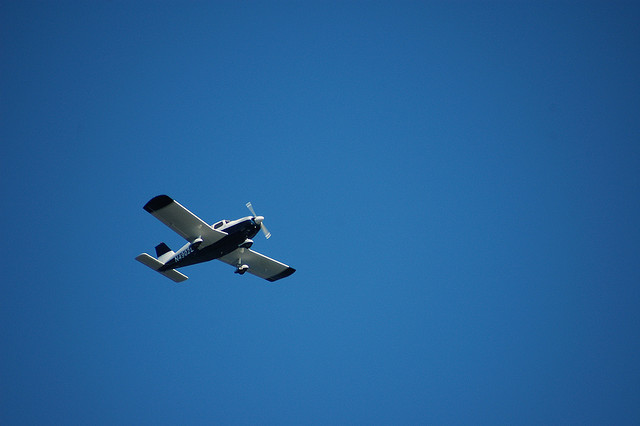 A growing body of science has confirmed that dirty freeway air undermines the health of those living nearby, and regulators are studying mitigation measures. But activists say a more pervasive danger has received too little attention: lead in the exhaust of propeller-driven aircraft that routinely fly in and out of small regional airports.

Charles Collins, who lives under the flight path about 500 feet east of Santa Monica Airport, said he and his wife are increasingly worried about how the pollution might be effecting their young daughter.

“When you call people, they give you a real brush-off, like, ‘Well, you knew the airport was there when you bought your house,’” he said.

“Nowhere were we given any information that these planes are using leaded fuel, that lead is being deposited in our neighborhood regularly.”

Unlike other vehicles, piston-engined planes and helicopters are allowed under federal law to use fuel that contains lead additives to achieve the high octane the aircraft engines require.

According to Kim Hoang, air toxics risk coordinator at the Environmental Protection Agency’s San Francisco office, atmospheric lead emissions nationwide totaled 990 tons in 2008, the most recent year for which figures are available. Of that, piston aircraft gave off 551 tons, and half of that around airports.

Testing on how that effects surrounding neighborhoods is relatively new. Two of the first investigations — conducted by the Southern California Air Quality Management District at the Santa Monica and Van Nuys airports in the spring of 2006 and winter of 2007 – found lead concentrations near the runways that were five to 10 times higher than the Los Angeles Basin average. In the neighborhood just east of Santa Monica Airport, concentrations continued to exceed background levels for more than half a mile downwind of the runway.

AQMD spokesman Sam Atwood noted that the pollution never rose above the national safety cutoff, 0.15 micrograms of lead per cubic meter of air. The Los Angeles basin average during the test period was 0.0086 microgram, In Van Nuys, the highest level recorded was 0.0261 and in Santa Monica, 0.096.

Testifying in November at a hearing of the state Senate Select Committee on Air Quality, Hoang said a 2010 study by the EPA found similar results. Soil and dust samples taken on Santa Monica Airport property and at local parks did not show lead levels above the local norm, she said.

Likewise Robert Freeman, environmental manager for Los Angeles World Airports, which runs Van Nuys – the nation’s busiest general-aviation airport – said “We have not seen anything that really alarms us.”

But John Froines, professor emeritus at the UCLA School of Public Health, said there is cause for concern.

At the Select Committee hearing, Froines acknowledged that the Centers for Disease Control sets the safety limit at 10 micrograms per deciliter of blood.

Research shows children can suffer a significant cognitive decline at levels between 1 and 5 micrograms, he said.

In July, Duke University researchers correlated state records on children in six North Carolina counties whose blood had been tested for lead with how close they lived to regional airports serving piston-powered aircraft. They found that children aged seven and younger who lived within six tenths of a mile of one of these airports had blood lead up to 2 percent higher than others living farther away. Children who lived within three tenths of a mile of an airfield exceeded the norm by up to 4 percent, the researchers found.

The eastern edge of Santa Monica Airport is within 250 feet of the closest home. State Sen. Ted Lieu (D-Torrance) chair of the Select Committee, said he’s called on state health agencies to conduct blood tests in that neighborhood. No agency has yet been assigned the task and no schedule has been set, Lieu said.

“The pattern practice flights circle over and over the same area,” he said. “They’re not that high and there’s a lot of them. So there’s a specific area that is being rained on.”

In a recent interview, Froines said he’d like to see broader soils testing. As for blood tests, airport workers should be included as well, he said.

Some pilots dismissed any thought of a health menace.

“If the EPA had found unsafe levels of lead at the airport, pattern flying would be an issue,” said flight school operator Joe Justice. “They have not.”

“Obviously, aviation gasoline has got lead in it. Over the years they have reduced the amount of lead and eventually they will eliminate lead,” he said. “There are many other contaminants in Southern California that are produced by cars that are equally as unhealthy as lead if not more so.”

But environmental organizations are keeping up the pressure. Last May, the Oakland-based Center for Environmental Health filed suit against ExxonMobil, Chevron, BP, Shell, AvFuel Corporation and 38 airport-based suppliers of lead-containing aviation fuel under Proposition 65, which regulates public exposure to toxic substances. CEH says the defendants have polluted drinking water and air around twenty-five airports throughout California. Under Propositon 65, pollution of drinking water sources above state standards would require the companies to cease sales of their leaded gas.

Charles Margulis, a spokesman for the Center for Environmental Health, said the lawsuit is in settlement negotiations.

“The goal is to clean up the problem,” he said. “Ideally that would be through industry reformulating, so they no longer needed leaded gas.”