Urban ag before it was hip 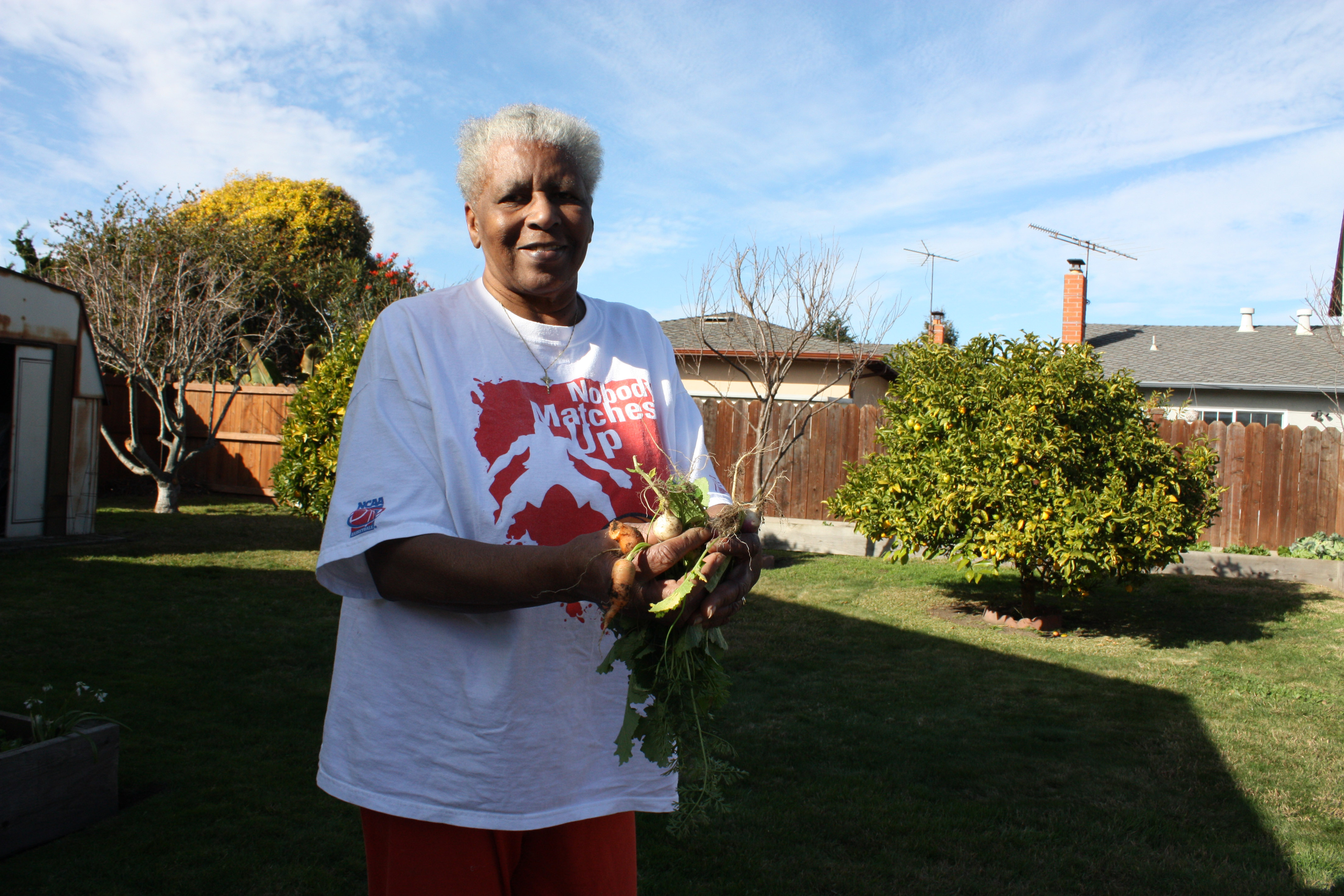 Texanita Bluitt has lemon, plum and orange trees in her backyard. In raised beds, she grows mustard greens, curly mustards, cabbage, carrots, turnips, onions, celery and potatoes. When she wants to make strawberry pie for her granddaughter, she goes to her backyard.

“About 95 percent of my fruit and vegetables come from my food garden,” she said.

Bluitt, who grew up in her family’s farm in Texas, has observed the urban gardening movement with a mix of frustration and relief that people are catching on to something that she learned as a child: eating what you grow is good for your health.

The urban farming phenomenon has taken roots in empty lots, rooftops, hospitals, and culinary establishments across the country. But some food advocates fear the movement has failed to fully integrate residents of color in this movement.

“Communities and people of color, in some ways, are beginning to be shut out due to the yuppification of this urban food movement,” says Gail P. Myers, an anthropologist who has worked extensively with black farmers.

And Myers is not alone.

“The marketing is ‘it’s cool and hip to do it, ’” said Y. Armando Nieto, executive director of California Food & Justice in Oakland.

Some have called urban agriculture the quiet revolution that’s being fueled by food insecurity, childhood obesity, diabetes, and malnutrition. The movement that has taken root in cities across the country and has generated everything from how-to online classes and lectures to DVD’s and starter kits, and bestselling books.

But as it turns out, urban farming isn’t a new movement after all. City blacks, Latinos, Asians, and immigrants have been planting vegetables and fruits for years in bustling cities like New York City, Detroit, Atlanta, and the greater Los Angeles, more specifically in Crenshaw and Compton.

“They did it out of the need to feed themselves,” said Ralph Paige, the executive director of the Federation of Southern Cooperatives. Paige, who has dedicated his life to improving opportunities for black-owned family farms, said blacks were working city soil before it was considered trendy.

Case in point. In South Central Los Angeles, a group of black and Latino teens at Crenshaw High School cleared a plot of land near a torn-down fence. The students planted cantaloupe, lettuce, squash, pumpkin, and collard greens. They watered the vegetables and pulled the weeds. When it was time to harvest the vegetables, a local resident approached the students with an idea — why not make salad dressing?

With the help of their mentor, the students would later sell the salad dressings under the label “Food from the Hood” in farmer’s markets and chain grocery stores. This was in the early 90’s.

“I wanted to maintain my heritage,” she said. “All I knew at one time was raising your own and cooking your own. We had our own chickens, turkeys, ducks, and ginnies. And if my mom’s fouls’ were laying eggs, she’d make us share it with the neighbor.”

While no one tracks urban food gardeners, its estimated that about 15 percent of the world’s food is being harvested in cities, according to the United Nationals Development Programme. A 2003 report “Urban Agriculture and Community Food Security in the United States: Farming from the City Center to the Urban Fringe” by the Urban Agriculture Committee of the Community Food Security Coalition said that as much as one quarter of the households in the U.S. have gardens.

Most of it goes to supplement people’s diets with seasonal harvests. The surplus food typically is for family and friends.

One of the oldest farms in Compton, Richland Farms, was named after the first mayor of Compton, who designated the area for farming in the late 1800’s. Rural blacks that had migrated from the South to California grew food. Mexican and Central American families would start to trickle in more decades later.

Rev. Lloyd Wilkins owns one of the 435 individual plots in Richland Farms.

“It has always been part of African American and the poor folk who came from the rural South,” Paige said.

He said some families in the farm have dairy cows, chickens, geese, goats, and roosters. Others grow corn, squash, and other vegetables.

Nieto recalled growing up in Long Beach. His grandmother grew vegetables in her front yard in the mid 50’s.

“Mama Licha use to grow corn and vegetables instead of having grass,” Nieto said. “That was normal for me.”

If there’s a perception that blacks, Latinos, Native Americans, Asians, and immigrants have been on the sidelines in the grow-your-own-food-in-the-city phenomenon, it’s because urban agriculture is being sold as a new trend, some food advocates say.

Paige explained it like this. The country has been on gradual a shift to eat more nutritious food because of record-number cases of childhood obesity, heart-related problems and increasing health care costs. There is also an emphasis in eating organic and locally-grown food. At the same time, there’s a higher demand from people wanting to know where their food comes from. Add to this a call from First Lady Michelle Obama for the country to eat better, and planting vegetable in the White House garden.

“It’s being re-branded as a new thing that’s catching on,” Paige said.

Throughout the 1960s scientists worked to perfect cellophane wrappings for dry food, and in the 1980s, the food industry introduce modified atmosphere packaging which would lengthen the shelf life of refrigerated meats and dry snacks. A decade later, packaging scientists made it possible for consumers to buy a salad in a bag.

“Quite frankly, I was embarrassed and ashamed that my grandmother was growing vegetables two blocks from the…market,” Nieto said. “So little by little, those growing practices went away.”

Despite the pressures, some immigrants held on to urban gardening no only for venues of food production but as ways to reinforce their cultural ties. In New Orleans, a large group of Southeast Asians who had arrived to the U.S. after the Vietnamese-American War began to plan food gardens. Elderly Vietnamese who spoke little English and had few job skills tended the gardens.

A study of these Hmong women, “Hmong Gardens: Botanical Diversity in Urban Setting,” found that planting food also improved these women’s sense of self-worth and self-reliance since they were using skills to bring food into the home.

Challenges around permit costs to have an urban garden make it difficult for young urbanites of color to take part in the movement, Myers said. There can also be tensions that result when immigrants grow vegetables in the front yards or keep chickens and roosters in their backyards since it can be seen as unsightly by their neighbors.

Non-profit groups with urban gardens need to make a strong effort, not only to include people of color in their food growing programs but also train them to become leaders.

“Make them feel they’re empowered — teach them the gardening,” Myers said. “It still feels like we’re giving folks the fish instead of teaching folks how to fish.”

Urban ag before it was hip