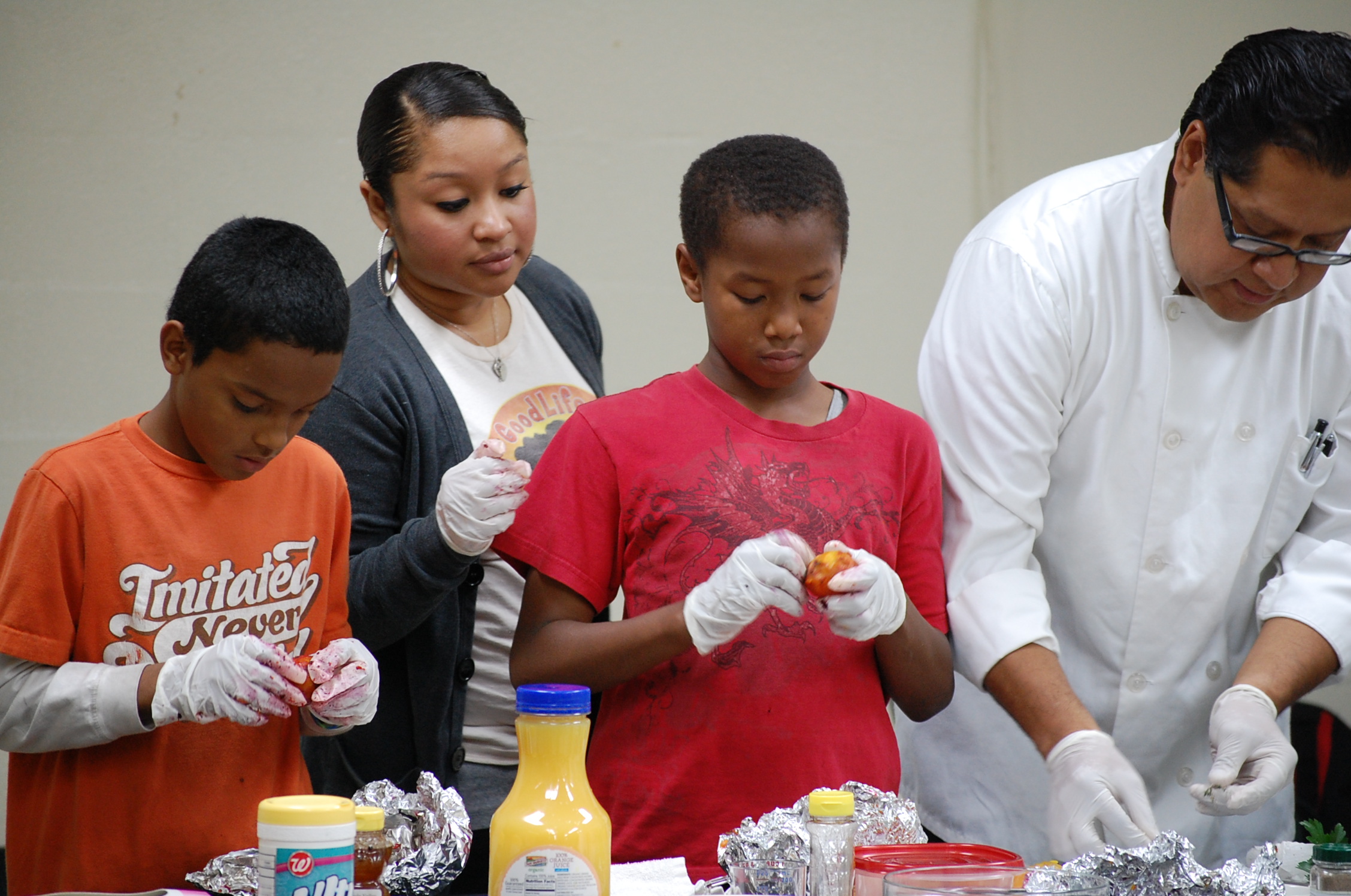 Parents trying to cook at home for finicky kids who are constantly exposed to Ronald McDonald, the Colonel and every sugary concoction imaginable are in for a struggle to start with. But cooking healthy?

As difficult as that may be, Los Angeles restaurateur Steven Vasquez and his family are on a mission to ease parents’ pain – by coaxing kids themselves to realize the delight in eating healthy, delicious meals that contain fresh ingredients.

With little fanfare, the Vasquez family for the last five years have been visiting Los Angeles-area recreation centers and other locations, holding exercise and cooking sessions for kids under the rubric “Cooking With Gabby” – Gabby being Vasquez’ daughter Gabriella.

The gatherings, usually held in Latino and African-American neighborhoods, can be small, sometimes just a couple handfuls of children between the ages of 9 and 12. And they can occasionally be unruly, given kids’ penchant to fidget and dismiss anything that doesn’t come with buttons and a screen.

But oftentimes, their faces light up when they taste the dish they just helped prepare with guidance from Vasquez, his wife Lisa, Gabriella and sons Steve Jr. and Anthony. Such was the case at one recent session at the Jim Gilliam Recreation Center in Baldwin Hills, where several kids readied a beet salad with green beans and fresh cranberry pear sauce.

“I learned how to cook,” said 11-year-old Walter Bolden, who helped peel the beets. “It was kinda cool,”

That counts as a small but not trivial victory in neighborhoods where fast food still reigns supreme and unhealthy home cooking habits from generations ago have yet to fully disappear. And that’s the central aim of Cooking With Gabby: Teach children about food and how eating healthy can be tasty, fun and beneficial – and that knowledge will lead to healthier communities.

“The parents and the kids actually take the recipes home and they cook together,” said Gabriella, 21, adding that it’s priceless to watch the faces of kids light up when they realize how good vegetables can be, “that eating healthy could be better than McDonald’s.”

The Vasquezes make a point of explaining the history of each major ingredient of dishes they present, such as fresh cranberry pear sauce, fruit smoothies, spinach dip with tofu instead of sour cream, healthy beans and rice, and vegetable pizzas, complete with whole wheat crust.

“The history of food and where it comes from is very important because, I think, once kids realize how long these fruits and vegetables have been around, they really get excited,” said the older Vasquez, 51, a former chef, caterer and now the general manager of Kate Mantilini restaurant in Beverly Hills. “It gives them a little more interest.”

Before preparing the ingredients for a fresh fruit salad, for example, Vasquez explains that watermelon originated in Africa, pineapple in Mexico and papayas in tropical islands. “It lets our kids – either black, brown, Chinese, Caucasian – know that fruits come from all over the place, so it’s like there’s a common thread there with food.”

“We’re all interconnected by the foods we eat,” added Steve Jr., 25.

As are the Vasquezes. The elder Vasquez grew up an Air Force brat, spending four years in Germany during which his family traveled around Europe. “I used to love eating, and my dad would love to eat, so we would always taste the food….I love different foods,” he said.

Steve Jr., who lived in Korea for a couple of years, recalled how his father during visits would stop at most every food stand to taste the fare. “We did a lot of sampling of different kinds of kimchi,” Steve Jr. said.

The non-profit Cooking With Gabby was inspired a decade ago by the inquisitiveness of a young Gabriella, who would pepper her dad with questions about ingredients and tastes as she watched him prepare food in his catering kitchen. “I was talking to my wife about it,” Vasquez remembered, “and I said, ‘We need to do something about teaching kids how to cook because there’s such a prevalence of fast food, and parents and kids not having dinner at home.’”

In addition to some culinary instruction, the Cooking With Gabby sessions also try to promote physical fitness. To this end, the Vasquezes often invite professional dancers, known as the “GoodLife With Gabby Dance Krew,” to teach the kids some moves, or invites a retired professional basketball player to host a brief clinic, before the cooking begins.

“There’s all types of things we have to teach our children in this community,” said Lucius Allen, 42, a former UCLA and Milwaukee Bucks star, and president of the Los Angeles chapter of the National Basketball Retired Players Association, who has led some of the clinics.

“This organization has stepped up to the plate to tackle the issues with children that actually can be impressed, “ he added. “When they go to McDonald’s, instead of ordering the hamburger and fries, let’s order the salad. We know you’re going to go to McDonald’s. Let’s order the good stuff.”

The impact of poor diets on children is well documented, including obesity, type 2 diabetes, high blood pressure and cholesterol and breathing disorders such as asthma –all of which can be exacerbated by a lack of exercise. According to some estimates, one in three U.S. kids are now considered overweight or obese.

Cooking With Gabby began its cooking sessions as part of Los Angeles Mayor Antonio Villaraigosa’s Summer Night Lights anti-gang program. On its own, it also has held gatherings at parks or community centers, local churches, the offices of health-related groups such as the American Diabetes Association, and at a half-dozen Los Angeles City schools. Top school administrators were involved in an imbroglio last spring over attempts by British celebrity chef Jamie Oliver, who advocates healthier school meals, to tape his reality television show at district schools.

But there’s been no controversy over the Vasquez’ efforts, which are supported by grants from Toyota, Wells Fargo, and the offices of area politicians, including Los Angeles County Supervisor Mark Ridley-Thomas and L.A. Councilmen Herb Wesson and Bernard Parks.

Herbert A. Sample is a freelance writer in Los Angeles, CA. He can be reached at hasample@mac.com.