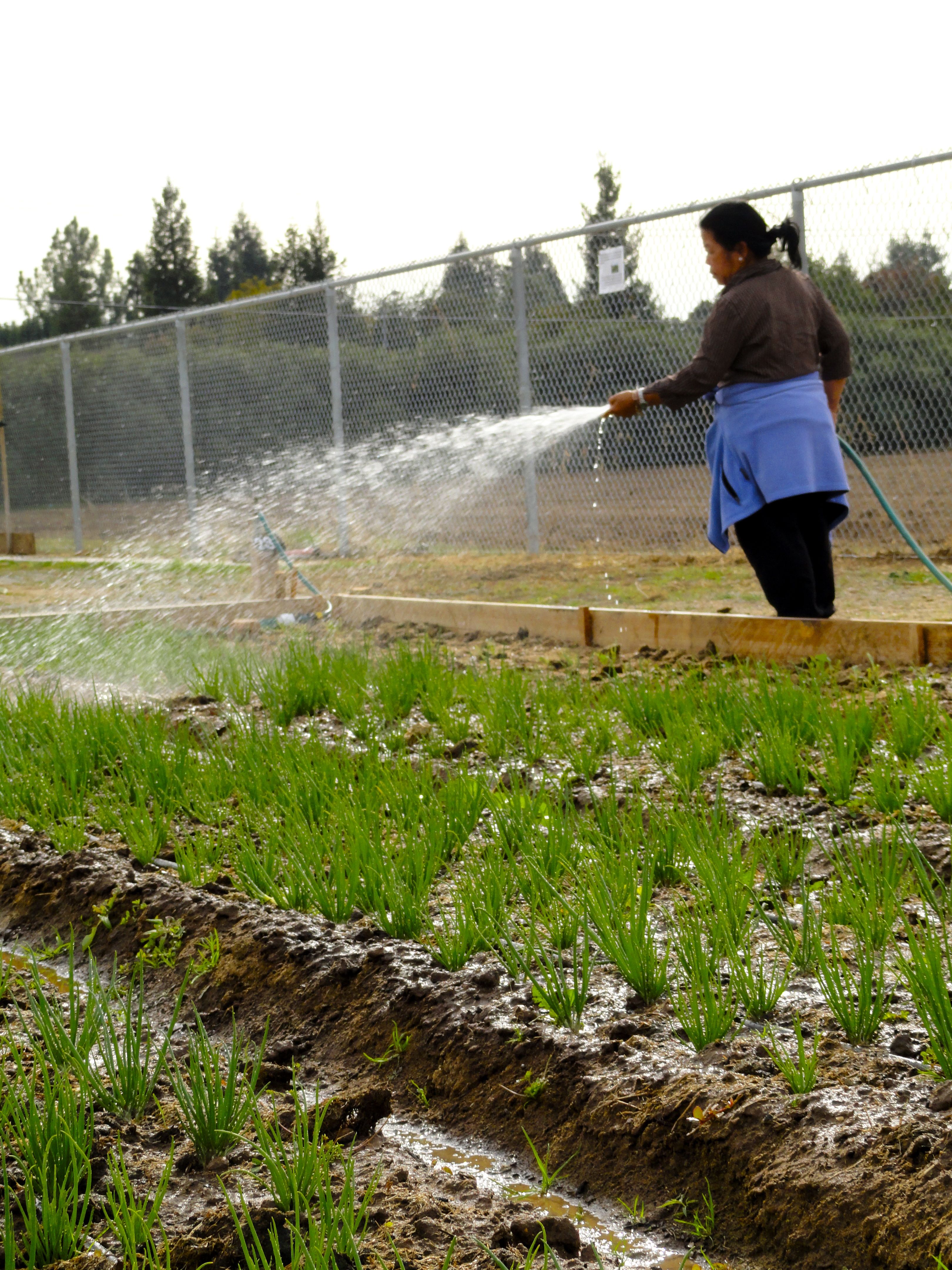 James Xiomg was tired of the rising price of onions.

So a year ago, when a friend invited Xiomg, 53, to the community garden at Al Radka Park in Fresno, he accepted. He and his wife, Yeng, soon signed up for their own plot, where they now grow rows of onions, heirloom greens, peppers and other crops.

Fresno’s Community Garden Coalition is about to open its third garden in a city where statistics show the “food hardship rate,” or percentage of residents who have a hard time putting food on the table, is the highest in the nation. According to the Washington D.C.-based Food Action and Research Center, 27 % of Fresno residents worry about where their next meal will come from.

While not restricted to low-income residents, the city’s gardens provide a way for many without much money to grow nutritious produce at a low cost, said Tom Matott, Fresno Metro Ministry’s Community Gardens Coordinator. The ministry, a group of faith-based organizations that advocates for environmental and other health issues, runs the gardens for the city.

Community gardens are nothing new. Boston’s Fenway Victory Gardens began as part of a national effort to grow vegetables during the rationing and food shortages of World War II. First Lady Michelle Obama made headlines in 2009 by breaking ground on the White House Garden, which still is tended partly by school children and provides ingredients for state dinners.

Along with providing nutritious and affordable produce, the gardens at Al Radka Park and on Peach Avenue in southeast Fresno, along with others around the county, serve as a place for first-generation immigrants to socialize and health care workers to reach out to those who might not seek help from a doctor or mental health professional.

The city’s newest garden is going into the Lowell neighborhood, north of downtown and identified by the U.S. Census Bureau as the poorest in Fresno. More than half of its residents live in poverty.

The plot near Highway 180 is in a largely Hispanic neighborhood and should be ready for planting in March, Matott said.
Those minding the city’s existing community gardens are largely Hmong immigrants—many of them elders—who use the gardens as a place to grow their native foods and socialize with others who speak the language.

A lot of the vegetables are “things you can’t find in grocery stores,” said Matott, as he walked amongst rows of lemon grass and elephant ears, a large, fleshy-leaved green.

He looks forward to seeing the difference in crops grown on each site. In the Hmong gardens, for example, Matott said he doesn’t see many tomatoes—a staple in many Mexican dishes.

At Fresno’s Community Food Bank, President and CEO Andy Souza said his nonprofit is in early talks of supporting the community gardens in an effort to ease hunger and demand at the nonprofit. His group gave away about 12,000 holiday food boxes this Thanksgiving.

“Anything that promotes independence and sustainability is good, especially in an area that is hit as deeply as this is,” Souza said.

The psychological benefits of gardening also have been recognized locally. Fresno County supervisors in November approved spending $180,653 in allotted state mental health funds on five gardens in the unincorporated county.

“It puts (gardeners) in the sun, gets them out of the house and relieves their symptoms of depression,” Markland said.

It also provides a place where county health workers can reach out to immigrant and low-income residents who might not visit a doctor or seek mental help if they’re having problems, Markland said. She envisions pavilions at each garden where, eventually, support groups like Alcoholics Anonymous or Narcotics Anonymous could feel at home.

At Al Radka Park, Xiomg, his wife and sister harvested tubs of onions, greens and peppers to take to family in Sacramento.

Xiomg came to Fresno from Laos, he said, and works as a custodian for Fresno Unified School District. He never gardened before visiting the park; he learned by talking to other gardeners.

Matott said some gardeners have problems affording the $3 monthly rent, but scholarships usually are found to cover the cost, Matott said. Other donations are common; Fresno County Sheriff’s Department often donates gardening supplies found on illegal marijuana farms, for example. Gardeners save seeds from one crop to the next.

The city recently turned down the ministry’s request for $35,000 to build the newest garden, Matott said, so neighbors are rallying to build the garden themselves.

“It shows how much it’s needed if you have people who can’t afford $3 a month,” Matott said. “It’s nice to be able to walk a few blocks and harvest dinner.”

Genevieve Bookwalter is a correspondent for the California Health Report at www.calhealthreport.org.