School gets a playground for the pre-K set 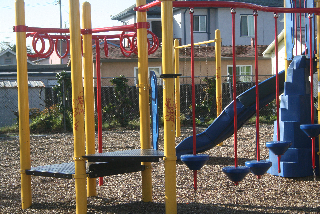 The school offers classes for mainstream students in kindergarten through third grade as well as specialized instruction for hard of hearing and deaf students from around the county.

The new playground equipment was installed on the heels of a recent report on childhood obesity rates in California and its counties. The study, released in November by the UCLA Center for Health Policy and Research and the California Center for Public Health Advocacy, found that Monterey County has had a decrease in childhood obesity of .8 percent from 2005 to 2010.

Monterey still lags behind counties on the Central Coast and the state. In 2010, 44.59 percent of Monterey children were classified as obese or overweight while the state average was 38 percent and the Central Coast average was 37.4 percent. The rates were determined by the physical fitness of fifth, seventh and ninth graders performance on state physical fitness tests.

Holly Thompson, a psychologist for special education for the Monterey County Office of Education and a former principal of the school, said the school has a playground for the older children but the youngest ones on campus could not use it because it was a safety hazard for them.

“They had some equipment in a custodian’s closet and to drag it out was inconvenient,” Thompson said, adding that the other alternative was for teacher’s to get signed permission slips to take the children to a park down the block. “We share the grounds with elementary school students but that playground was not built for preschoolers. We had one kindergarten student break an arm.”

The playground for the older children became off limits.

“You are in so much trouble if you don’t have places for preschoolers to move their legs,” Thompson said.

But now, thanks to a funding from a multitude of sources and a group of volunteers who gave up a Saturday to install the park, the children have a safe place to play on campus. A $10,000 grant from the Monterey Peninsula Foundation launched the effort by Doug Brown, a retired psychologist and former director of special education for Pacific Grove School District, to ask other local agencies for donations. Others to contribute to the cause included the Alisal Rotary Club, the Corral del Tierra Rotary Club, the Quota Club, the Lions Club of Salinas, a personal donation from the Barbara English family and the Monterey County Office of Education Deaf and Hard of Hearing Trust Fund.

“I am extremely proud of the team,” said Nancy Kotowski, the Superintendent of the Monterey County Office of Education. “They identified a student need and worked diligently to find a solution, and now this special population of students will have an on-site playground to meet their needs of physical and social skills development.”

“They said we’ll do you one better and we’ll build it,” she said. “We had a wonderful time.”
Douglas Fouts, the parent of a second-grade boy at Toro Park Elementary School, was one of the volunteers who gathered on Nov. 5, planning to work from 8 a.m. to 5 p.m. to put the playground equipment together. The equipment included a slide, monkey bars and ride-on toys that bounce from front to back. The only thing that was left after the playground was installed was letting the pre-mix cement set, topping it with wood chips and conducting a safety check.

“When he (my son) was in kindergarten, we noticed that some of the bigger kids don’t remember their manners or give the younger kids a chance,” Fouts said, adding that he has a younger daughter who will be in kindergarten at the school in a few years.

Fouts and his wife have friends who have children with special needs so they found out how to get involved when they heard about the playground installation.

“I didn’t really know what to expect,” he said, noting that he and his young son helped to bolt and screw some of the pieces together. “It started getting used as soon as they pulled the orange plastic barrier down.”

The group included educators, community volunteers, staff and parents from the Hard of Hearing program, the Corral de Tierra Rotary Club and the Church of the Good Shepherd. The equipment came from Ross Recreation, who provided safety checks to make sure the playground met state and federal guidelines.

“It was a nice feeling of being involved and saving the school a huge labor bill,” Fouts said. “It was a really great idea to get parents and service organizations involved.”

The educators and volunteers held a ribbon cutting ceremony on Nov. 14, and the children had already broken in the equipment.

“The kids are playing now,” Thompson said. “They didn’t need any instructions.”

Thompson said access to a playground is especially important to children at the preschool age because they have a lot of energy and they learn about their world through movement.

“It’s very isolating socially to have a communication (deficit,)” she said. “A playground is a place where a lot happens – it’s fun and communication doesn’t always rely as much on the ability to put things into words.”

She added that play also helps them to develop fine motor skills, which is essential for using sign language and learning to write.

The playground is similar to any other and Thompson said that officials asked if there were any types of equipment that would not be good for hard of hearing or deaf children. The answer they got from playground specialists was that the children didn’t need any specialized equipment.

So far the favorite piece is “just the pull up bar.”
Thompson said the children don’t seem to know quite what to do with it, as they mostly just hang from it. “There will be waiting in line to have a turn.”

They did leave the entryway open so that the playground could be accessible to a wheelchair, though there are not any students in wheelchairs enrolled in the school at this time.

While the students didn’t need any special equipment, Thompson said that the school always has lots of staff, including interpreters, on hand when the children are playing outdoors.

“Sometimes you do need a little mediation,” she said, of the children who can sometimes have misunderstandings that are harder to communicate than for hearing children. “It’s few and far between, but sometimes the children don’t understand each other.”

“Working collaboratively with the Monterey County Office of Education has been wonderful,” said Dee Baker, the superintendent of the Washington Union School District, which houses the Salinas school. “The young students in the Deaf and Hard of Hearing program and the young kindergarten students at Toro Park School will all reap the benefits of this great project.”

Thompson added that the park will be used year round since there is a summer program that brings together children from preschool through middle school.

“It’s just so marvelous,” she said. “It’s hard to put into words. It’s so energizing. It’s really incredible that if you dare to dream, you can make it happen. A lot of people step up to the plate and help.”

School gets a playground for the pre-K set