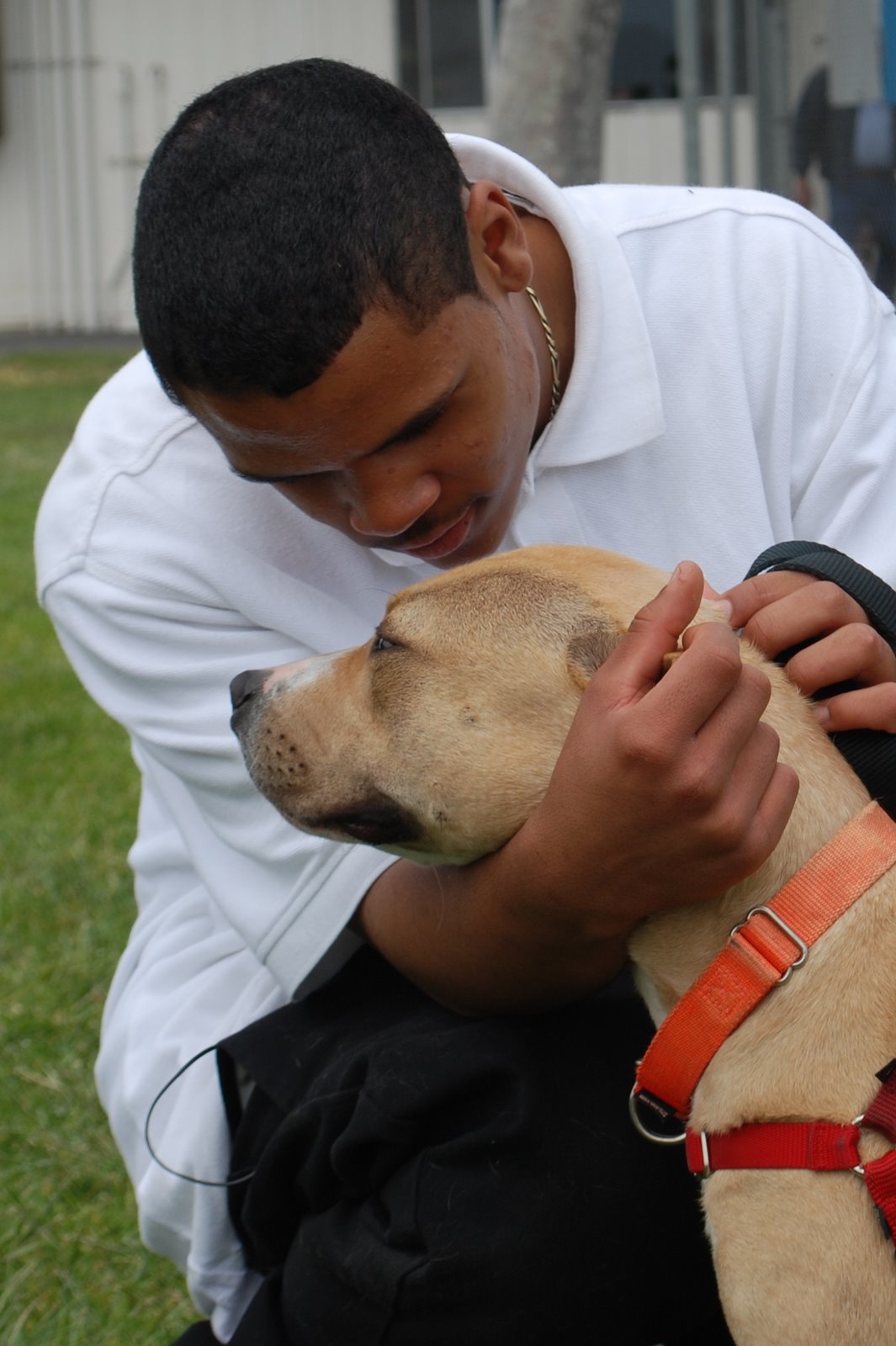 The SPCA for Monterey County is pairing at-risk youth in Salinas with at-risk dogs, and the benefits are blooming on both ends of the leash.

Called “Take the Lead,” the program allows students at Washington Middle School and incarcerated youth at the Monterey County Probation Department Youth Center to train dogs that lack the social skills they need for adoption.

Counselors, teachers and SPCA staff say the program is a great way to provide a positive experience for kids having trouble academically and socially by giving them an opportunity to make a huge difference in the life of an animal.

“We definitely see the growth in the kids when they’re working with the dogs,” said Amanda Mouisset, Pet Behavior Specialist at the SPCA for Monterey County.

When the SPCA launched the program in 2008, Washington Middle School’s principal, Judith Roney- Peterson, and teachers there embraced the idea.

“It’s part of a social/emotional network we have,” Peterson said. “We target kids who are having difficulty and match them with activities that will help them. Animals seem to calm kids down,” she said.

Now other schools are lining up to participate. And with more than $86,000 in grants acquired for next year, with more pending, the SPCA is gearing up to triple the number of program participants to 198 children and 75 dogs, said Susan Koza, Director of Development for the SPCA of Monterey County.

Mouisset selects five dogs at a time for the five-week program. Many of them have been surrendered to the SPCA by their owners for behavioral problems. None of them have aggressive tendencies, just bad manners.

Twice a week Mouisset takes the dogs to Washington Middle School and the Youth Center. At Washington counselors have a “watch list” of students with challenges, said Stacy Picciuto, the physical education teacher who coordinates Take the Lead for Washington. They may not be engaged in school, or they have trouble integrating socially or have suffered some kind of abuse.

Take the Lead also includes children with mental disabilities like autism or Asperger’s syndrome. For some of those kids Mouisset will bring in her own trained dogs.

“It gives them a really cool success story that they can build on,” Picciuto said.

One of the most common comments from participants in Take the Lead is that they are gaining more patience.

At the Youth Center, staff selects teens who are performing well at the Center to participate, so the program is an incentive for them to stay on track. These kids are 14 to 18-year-olds incarcerated for crimes like selling or using drugs, assault and battery and theft.

“A lot of these kids are robbed of their childhood,” said Alex Carrillo, a probation aide at the Youth Center, who coordinates the Take the Lead Program at his facility. “The staff at the SPCA is really great. The kids talk to them and open up to them and you see these kids smile. You don’t see that a lot.”

One of the biggest changes teachers and counselors notice is that kids open up when they make a connection with an animal, especially with one looking to them for guidance, approval and compassion.

Some kids come in with the attitude that, “I’m a tough kid, I know what I’m doing, just give me the dog,” Mouisset said. But when they realize the animal has issues and feelings, she sees the kids start responding to the animal’s needs.

Rigo, a resident at the Youth Center, trains a pit bull he named Estrella after a dog he had that ran away while he has been incarcerated. He remembers the first day this new Estrella came into his life.

“She came straight to me, she picked me,” he said, beaming.

Building comradery is another benefit of the program.

At the Youth Center, Carrillo looked out over a grassy field where the residents train the dogs.

“We have kids from opposing gangs in this group right now. But when they’re working with their fellow residents to train a dog, they’re out there talking to each other, working together and praising each other,” he said.

He remembers one kid, Luis, who was training a huge unruly Saint Bernard named Chaplin. Luis really bonded with Chaplin and lobbied to repeat the program. When he left the Center, he volunteered at the SPCA and was later hired as an employee. At a Youth Center event honoring volunteers, Luis gave a speech thanking Mouisett for helping change his life.

“That place was in tears,” Carrillo said. “Luis felt he could relate to that dog because he too felt locked up and forgotten.”

A sense of responsibility

At the Youth Center, residents are preparing themselves to reenter their communities. They get family therapy, drug and alcohol counseling, academic and vocational education and help dealing with gang issues. But one of the most popular programs at the center is Take the Lead.

“Take the Lead is the only group that gives the kids a responsibility, Carrillo said.

“In a life they have no control over, now they have the responsibility of caring for another life.” And there’s always a waiting list of kids who want to participate.

“We’ve never had to kick a kid out,” Carrillo said. “There have been zero issues. It’s a privilege to be here and they know if you mess up, there are 20 kids ready to take your place.”

Sal, one of the Youth Center residents, is training Janie, a tiger-striped Pit Bull who looks at him adoringly. Janie was attacked by another dog and needs to learn how to be social with other dogs and people again, Sal said.

“I’ve learned patience,” he said. “Having animals around keeps you really sane. This [program] shows you a little bit of responsibility,” he added.

Sal and the other participants in his group will have a graduation ceremony with their dogs and will write letters about them to be posted next to their kennels at the SPCA to educate prospective adopters about the dogs’ personalities and what kind of homes would be good for them. The kids craft these letters very carefully, they all know what’s at stake.

Linking at-risk dogs with at-risk youth and adults isn’t a new idea. It’s slowly catching on around the country. The Peninsula Humane Society & SPCA in San Mateo is partnering with the San Mateo County Sheriff’s office with a two-year-old program at the minimum security Maple Street Transitional Facility in Redwood City. That program is called TAILS (Transitioning Animals into Loving Situations).

The dogs live at the facility and two residents are assigned per dog. They are responsible for all of its training and care. Pet Food Express donates supplies for the dogs and a local dog trainer volunteers her time.

“People are getting a great dog if they’re adopting a dog from this program,” said Scott Delucchi, a spokesman for the Peninsula Humane Society & SPCA.

The dogs do give something in return.

“They say the presence of the dogs has changed the atmosphere there. More people are smiling,” Delucchi said. “They all take pride in the program.”

That pride shines through at Washington Middle School as well. The students are clearly tuned into and very protective of the dogs in their care.

Robert Martinez, a Washington student, works with Roscoe, a very nervous but playful terrier mix who spent the first year of his life in a backyard without much attention. Earlier in the session Roscoe got excited and peed on Robert’s shoe. And when someone moved suddenly, Roscoe retreated in panic.

“He’s a little bit nervous,” Robert said, kneeling next to Roscoe, embracing him and talking to him in hushed tones. “His heart is racing, give him a minute,” he said to the trainer. That’s music to Mouisset’s ears.

What motivates her to keep investing her time and talent in the program?

“Knowing we’re helping the children who are our future and part of our community,” she said. “We’re giving the dogs a second chance, and with the children, hopefully that compassion and empathy that we’ve worked on sets in.”