Playworks helps kids make the most of recess 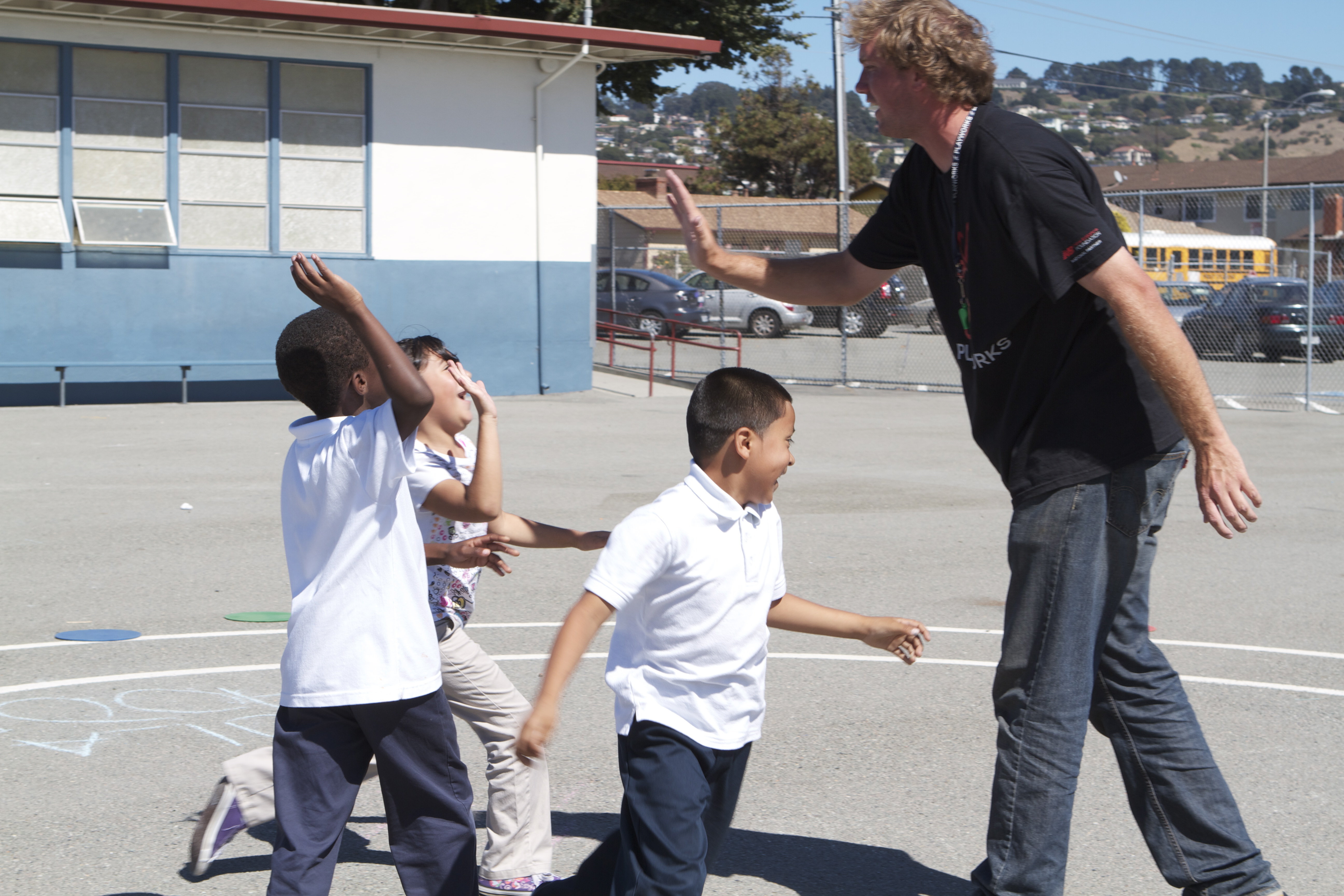 Elementary school teacher Vanessa Cavelli used to dread recess and the drama that could break out on the playground.

“You wonder how many fights you’ll have to break up that day,” Cavelli said.

She gestured to the large all-blacktop playground where scores of grade school children played games like four square and kickball. “If you imagine all these kids with tons of energy, and play that isn’t focused on something, then it is kind of chaos.”

“Chaos” was seven years ago at Stege Elementary in Richmond. The school is located in a low-income neighborhood where 90 percent of students are eligible for the free and reduced lunch program.

“Many of our students come from low-income backgrounds,” Smith said, “but it does not affect the fact that these parents of our community want the same thing as parents whose kids are right up on the hill want.“

The neighborhoods where these children live, and its pockets of crime and violent activity can have an effect on the children’s behavior, Smith said.

“It’s because they have to posture themselves,” she said, referring to the tough attitudes and tendency towards violence many students would exhibit on the playground.

Seven years ago, playtime was a disorganized free-for-all. Even in second grade, Cavelli said, kids will fight or spread hurtful gossip. They also played games well beyond their maturity level: young girls pretending to be strippers or reenacting scenes from The Bad Girls Club.

“A lot of our kids are exposed to too much, and it does come out in their play,” Cavelli said.

Teachers and administrators decided to take action. The school got in touch with Playworks, a nonprofit organization that assigns a full-time program coordinator to eligible schools to provide structured play through sports, games, instruction and positive reinforcement.

The Program Coordinator at Stege Elementary is Colin Reece, or “Coach C,” as the students and staff call him. Reece is a towering pillar of seemingly endless energy. His enthusiasm and positive attitude make him popular with the kids and the faculty.

A typical workday for Coach C includes jumping in for a game of kickball, leading a group of enthusiastic second graders in a crazy, arm-flailing “Go, go bananas!” cheer, soothing the occasional scraped knee casualty and challenging 10-year-olds to hi-five at least three people at recess.

The Playworks Mission is “to improve the health and well-being of children by increasing opportunities for physical activity and safe, meaningful play.” Program coordinators tackle this mission through five key components: recess, after school programs, the Junior Coach program, class game time and sports leagues.

Playworks, formerly Sports4Kids, was founded in 1996, and its first participants were students at an elementary school in Berkeley. Today the organization has grown to over 300 schools in 22 cities, largely through funding from The Robert Wood Johnson Foundation, according to Playworks spokesperson Cindy Wilson.

A school is eligible for the program if at least 50% percent of its population qualifies for free and reduced school lunch, although the average school has 85% students that qualify.

The cost to the school is an annual flat fee of $25,500. Schools vary in how they afford the fee – some pull from their discretionary budgets, others get help from PTA groups, or a combination of these avenues, Wilson said.

Stege Elementary pays for its program through Title I funds, Department of Education funds allocated to low-income schools to help bridge the gap between them and other students.

Principal Smith places a high value on what having a full-time person dedicated to play brings to the school. “It becomes an expectation, that [Coach C] is going to help with that structure as how we interact and how we play,” Smith said.

Coach C designates play areas, ensures everyone is included who wants to be and encourages positive interactions between the students during recess. “You’re out” is replaced with “Good job, nice try.” Kids aren’t required to play, but rather given options during free time.

With all the people on the playground at once during the recesses, Coach C calls for backup: Junior Coaches, fourth through sixth graders he and the teachers have selected for their leadership qualities. Junior Coaches don their purple Playworks t-shirts at recess and hit the playground to set up games and get other kids involved.

Junior Coach Edilberto Angulo, aged 11, organized a game of basketball, although he would have preferred to lead the soccer game. “I had to Rock-Paper-Scissor to see who would play soccer, and I lost,” he said with a shrug.

Rock-Paper-Scissors, or “Roshambo,” becomes a cornerstone of the playground environment. Playworks coaches teach this simple game to kids as a way of settling disputes quickly and fairly.

“Recess is such a short time that any sort of conflict just takes away,” said former Coach Amanda O’Malley, now the Regional Program Manager for Stege Elementary and seven other schools in the bay area. She said on average, schools in her region allow for about 20 minutes of recess.

Beyond wasting time, it solves the argument on the spot, she said. Doing so avoids the issue coming up in class or on the walk home.

“It’s stopping these problems and giving the students the tools to not even engage,” O’Malley said.

Junior Coaches are expected to set the standard on the playground, initiating roshambo when needed, providing encouragement, and leading the games. But their position also lends itself to the classroom.

Sixth grader Samaria Evelyn, 11, is a Junior Coach this year, but last year was not able to participate because of her grades. “Being a Junior Coach is a high privilege because you have to teach the kids to be respectful, be responsible and be safe,” she said, “It makes me want to work harder and to improve some of my grades.”

Angulo also takes his coaching responsibilities seriously. “It makes me feel good because [younger kids] look up to me, and they say they want to be like me when they are in 6th grade,” he said.

Beyond the Junior Coaching program, the Playworks coach also leads game time with each class, including the teacher. In the afternoon, Coach C lines a second grade class up along the painted line of the basketball court. He runs up and down the line, jumping and enthusiastically leading the class in a series of cheers and stretches, before launching into more physical games.

Playworks also offers an after school program where leaders invite students to work on arts and crafts projects, play games outside, or take advantage of tutoring services. At Stege Elementary, the afterschool program is run by another program, the Bay Area Community Resources. Instead of an after school program, Coach C comes in before school to diffuse potential playground issues as kids arrive for the school day.

In the evenings and on Saturdays, the children can participate in sports leagues with other Playworks schools. Coach C says that for many of these children, the Playworks sports leagues – volleyball, basketball, etc. – are their only opportunity to play on an organized team.

“We don’t keep score,” he said. “We just focus on having fun learning a sport, and try to make sports a part of their life.”

But there’s more to all of this than just fun and games, studies have shown that programs like Playworks actually help students to learn better. According to a 2009 study in Pediatrics, children who receive daily recess have fewer behavioral problems.

Another study conducted by the University of California – San Francisco determined that programs like Playworks promoted physical activity as well as emotional well-being. Students reported feeling safer and had greater participation in their schools than their peers.

“One of the biggest benefits is recovered class time,” Wilson said. She said that Playworks surveys its schools at the end of every year, and Bay Area teachers report they reclaim between 6-7 minutes of class time per daytime, which can mean up to 24 hours of recovered class time each year.

Teacher Vanessa Cavelli recalled the years she taught before Playworks, where plenty of time was lost to dealing with the drama leftover from recess. “People are upset. They’re crying, they’re mad. So there goes a half hour of instruction just to calm everyone down,” she said, “Even after that, you still have kids who are still angry and then they’re not primed and ready to learn.”

Cavelli said the Playworks program hasn’t solved all the schools problems with behavior – fights will still occur – but it has made a significant improvement.

“A lot of whatever happens at recess isn’t just about recess, but about what’s happening in their life,” she said. “[Playworks] is nice, because it makes things feel like a safe haven. It’s not about getting in fights or trying to prove yourself, it’s just playing.”

Playworks helps kids make the most of recess