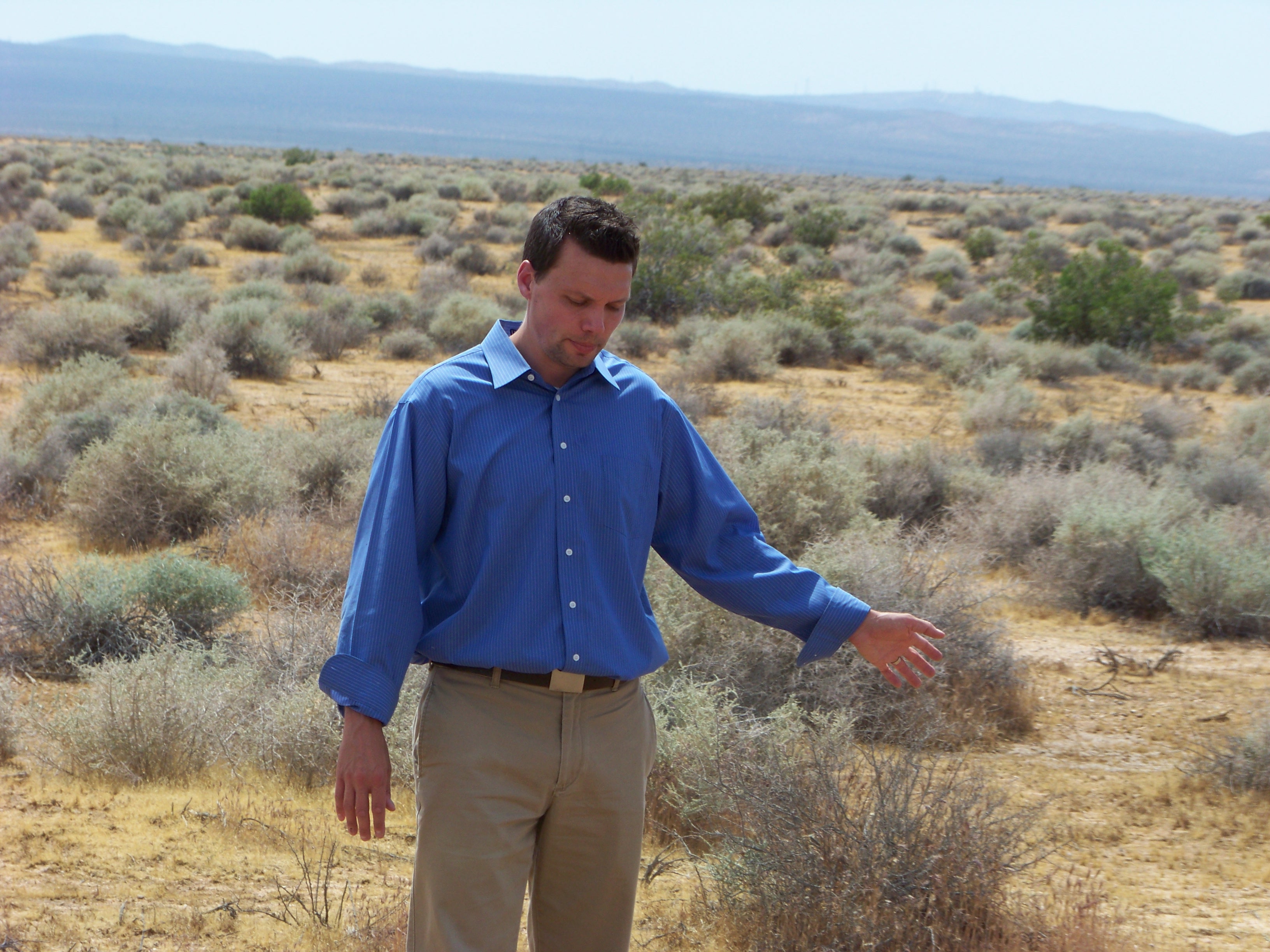 The Mojave Desert community of Hinkley is best known as the setting for the legal battle over chromium 6 contamination in groundwater, as portrayed in the movie “Erin Brockovich.”

Now, activists say Hinkley faces a new environmental threat – this one carried on the wind.

Sewage composting company Nursery Products is seeking to build a processing plant eight miles west of Hinkley. Residents fear that Mojave Desert winds of up to 80 mph will carry dust contaminated with bacteria, industrial pollutants and other pathogens into town, making people sick.

“Hasn’t Hinkley had enough happen?” asked Linda Snively, a member of HelpHinkley, an activist group opposing the project. “First there was the chromium 6 fiasco, and now this. Somehow there’s this target on Hinkley.”

Nursery Products’ 80-acre site is designed to accept 400,000 tons of waste per year, half of it partially treated sewage, referred to in the waste industry as biosolids. That sewage can include not only what people pour down the drain or flush in the toilet, but chemicals and metals from industrial waste and street runoff.

The other half of the processing plant’s raw material will be green waste, such as wood chips, grass clippings and tree trimmings, says Chris Seney, Nursery Products’ operations director.

He said he hopes to win final government approval and have the facility running within six months. Some of the processed waste, Seney said, will be sold as fertilizer. Other compost will be sold to golf courses and schools as fill and soil amendment, he said.

But there’s increasing debate over the environmental and public health impact of treated sewage.

The Environmental Protection Agency describes it as “nutrient-rich organic materials resulting from the treatment of sewage sludge.” According to the EPA, biosolids “can be safely recycled and applied as fertilizer to sustainably improve and maintain productive soils and stimulate plant growth.”

Despite such benign descriptions, in 2009 the EPA also found that sewage sludge contains dozens of toxic and hazardous materials, including heavy metals, pharmaceuticals and endocrine disruptors.

The commission discontinued its giveaway program, but later issued a report claiming its compost was no more contaminated than are many commercial composts.

In June, Yale University researchers published findings that biosolids that meet federal standards still may spread emerging pathogens such as noroviruses, a family of microbes that, according to the Centers for Disease Control and Prevention, causes more than half of all foodborne stomach flu outbreaks nationwide.

In light of such findings, HelpHinkley founder Norman Diaz doesn’t trust Nursery Products assurances that its facility will be safe.

“There are no protections at all,” he said.

“There are a lot of things you could do to make this safer. You could enclose it, like they’ve had to do for composting plants in other areas. But here, there’s nothing. Nothing but ‘Let’s hope the wind doesn’t blow.’”

HelpHinkley has been protesting the project since it went before San Bernardino County planning commissioners in 2005, and has waged a court fight under the state Environmental Quality Act since 2007. In April, San Bernardino County Superior Court Judge John Vander Feer ruled on the sole remaining obstacle to the project moving forward. Nursery Products must revise its water use plan because the aquifer under the proposed plant is depleted, Vander Feer ordered.

Seney said the requirement will be easy to meet. When it’s in full operation, the processing plan will use just 1,000 gallons of water a day – a consumption level equivalent to that of two residential households, he said.

Far from being the public health menace that HelpHinkley activists describe, the proposed plant is an environmental model, Seney said. It’s solar powered, more remote from dwellings than any similar facility in California and separated from the water table by more than 300 feet of dry, rocky soil. Opening the facility will markedly reduce greenhouse gases, with sludge trucks no longer required to travel to processing sites as far away as Arizona, he added.

The composting process will take about 15 days per batch, with the mixed sewage and green waste piled in long rows about six feet tall and heated through a natural chemical reaction to 131 degrees, Seney said.

Jordan Peccia, an associate professor of environmental engineering at Yale University and a co-author in the recent study on pathogens, called such a process “pretty rigorous.” Further, the site’s distance from Hinkley probably does reduce exposure risks “by several magnitudes,” he said.

Still, Peccia said, scientists have a lot to learn about what pathogens are removed in the sludge processing treatment and what remains. His own research demonstrated that there are a lot of health risks that current treatment standards don’t address, Peccia said.

“In a perfect world, these facilities should be enclosed,” he said. “Thinking strategically, if I were in the community and upset about this, the fight wouldn’t necessarily be to ban everything and get everything out of there. The fight would be to enclose the facility.”

“This is a logical step. It’s a relatively inexpensive step for cities and residents throughout the county,” he said. “If it’s not financially viable, it won’t get built. If it doesn’t get built, you don’t solve your problem, which is what to do with sludge and green waste.”

Hinkley resident Bob Conaway said Nursery Products and government regulators could have shown more imagination. One possible model might have been a University of Nebraska project in a windy area that successfully contained dust with plasticized sheets and soft covers, he said.

Conaway said he wishes Nursery Products would establish a community advisory panel, similar to the body recently formed by Pacific Gas & Electric to discuss chromium 6 containment and remediation efforts in Hinkley. Instead, he fears that Nursery Products will show the same disregard for Hinkley’s residents as was reported in nearby Adelanto.

Nursery Products began operating a composting facility in that town in the spring of 2002. In a public hearing a year and a half later, city officials took more than four hours of testimony from people outraged at the revolting smells and clouds of flies that they blamed on Nursery Products. One woman quoted in court papers said the stench made her eyes water and made breathing difficult.

“You open your car door and hundreds of flies go in,” she said.

In a legal settlement, Nursery Products agreed to move out of town.

The state Department of Health Services determined there wasn’t enough data to tell whether the health problems residents claimed they suffered were caused by the composting. Still, in a report, senior environmental scientist Tracy Barreau wrote that “some of the symptoms … expressed to DHS are consistent with biosolid-related exposures documented in the scientific literature.”

In an interview at the proposed Hinkley site, Seney called the claims of filth and stench exaggerated.

“No one was sick like they claim and all these other issues,” he said. “I had eight employees and myself. Every single day I was there. No one was sick.”

“The facility there was next to homes. I mean, you could throw a rock,” he said. “This is a completely different scenario.”