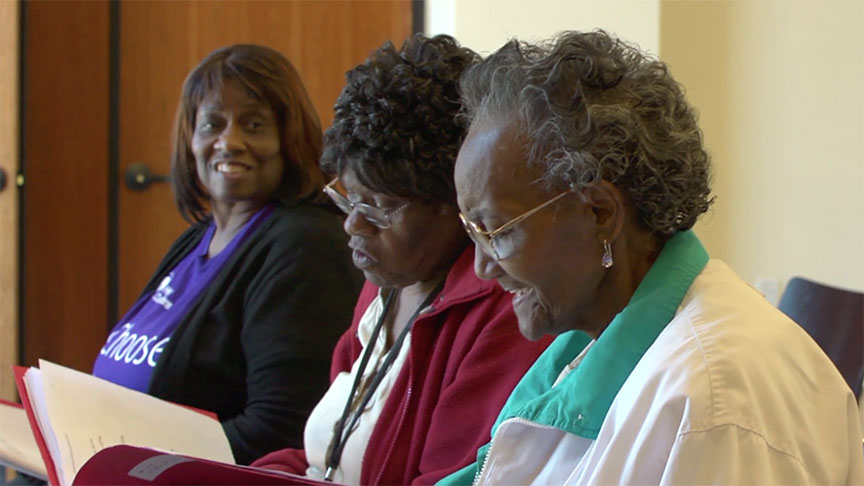 Kathia Canlas spends almost every working minute on her feet as an aid at the Santa Ana Senior Center Community. Canlas works at one of the two senior centers in the city, which serve 100 to 150 people each day. She prides herself on the kind of resourcefulness that lets her help local seniors without formal training, but she’s also been confronted with situations that have sent her into a tailspin.

“An elderly lady who had come here for the first time told me she wanted to end her life,” Canlas recalled. Canlas and staff immediately went scrambling for phone numbers they could call and had the center’s greeters rally around the newcomer. The woman ultimately rebounded from her severe depression and now comes to the center regularly.

“All we knew is that we had to do something for this lady,” Canlas said.


Resourcefulness and a little luck are fueling senior center staff across the state, advocates say. Municipalities operate 60 percent of California’s 800 senior centers. As municipal revenues dwindle, fewer and fewer resources are trickling down to fund services for seniors.

“What we’ve been seeing in this environment in the last five years is a reduction in resources and consolidation of recreational programs,” said Sandi Fitzpatrick, California Commission on Aging Director.

The commission is finishing a survey of at least 750 of the state’s 800 senior centers. Fitzpatrick has overseen the survey, as a joint effort with the Congress of California Seniors called the Senior Center Initiative, since 2009. The outlook for the immediate future is grim, Fitzpatrick said.

“They’re having trouble making ends meet,” Fitzpatrick said. “As city coffers continue to go down, they’re cutting back on everything, including staff, and indeed some are closing.”

Local centers are feeling the cuts. In certain cases, Canlas said, measures she and her staff take are outside of their purview.

“We just don’t think about it or talk about, we just do whatever is necessary,” Canlas said.

The survey also checks on infrastructure issues, emergency preparedness and accessibility. The Santa Ana Senior Center is in no danger of closing, according to the report. But the need for remodeling and updating is noticeable, and as far as Canlas knows, updates aren’t anywhere under the radar, she said.

Among things lacking at some centers throughout the state are air conditioning units, disabled access and earthquake safe buildings, Fitzpatrick said.

Santa Ana Senior Center is usually bustling with regulars by 9 a.m., engaged in a variety of activities including learning computer skills, selling handcrafts or socializing.

For some, however, coming to receive services is not a matter of choice. Mary Steiner, 95, lives on Social Security and walks aided by a cane. The exercise classes she takes there for free, Steiner said, are vital to her physical wellbeing.

“People here are very nice,” she added. “Sometimes I can’t pay, but I still get lunch too.”

The need for senior centers is high, but there is no infrastructure on the state level to fund such services. Instead, senior centers are often part of existing community centers.

“Senior centers in state structures are non-existent,” Fitzpatrick said, adding that there has been nothing targeting the senior population from a state policy standpoint. Community centers are either assigned to the Parks & Recreation area of city or county governments or run by nonprofit organizations.

Fitzpatrick recited a short roster of centers that had met unfortunate fates, including Woodland Community & Senior Center in Northern California. Woodland was built by the city to simultaneously serve as a senior and community center.

“One day we walked in and saw there was simply no staff on the senior side,” Fitzpatrick said. When the city’s budget was compromised, it was the senior services half of the operation that got sacrificed.

To add to the problem, during the 2010-11 fiscal year, many programs for seniors were hit by budget cuts. Former Governor Arnold Schwarzenegger, for instance, vetoed funding for the Alzheimer’s Day Care Resource Center program.

A number of senior centers operated jointly as Alzheimer’s’ Day Centers, and the veto put a moratorium on new licenses, leaving the growing number of families in need of day services looking for a solution. The reduction in funding also forced some ADCRC’s to close their doors.

The CCOA survey found that working families are dropping off relatives with dementia and similar illnesses at the regular senior centers after their adult day health care centers have been eliminated. This is something that has not escaped notice of patrons, either.

“It used to be just a senior center,” said 72-year-old Santa Ana resident and Santa Ana Senior Center regular Jack McCoy. “Yeah, now I see everything. You’ve got everyone in here.”

Because many senior centers rely significantly on volunteers, many staff members are not trained to provide specialized care.

Santa Ana Senior Center is no different, Canlas said, saying that it depends heavily on volunteer help. In addition to depression, common conditions she regularly sees include early stages of dementia, cancer and people recovering from stroke.

“Volunteers simply are not and cannot be trained on all issues that come through the door,” Fitzpatrick said.

“We’re seeing a lot of resiliency,” Fitzpatrick said, citing the ability of those in charge to tap every resource to keep the centers afloat. “I think it’s a special kind of person that runs a senior center, trying to do the best they can with increasing population and decreasing resources.”

“But we’re still on the downside,” she added, “for the time being.”