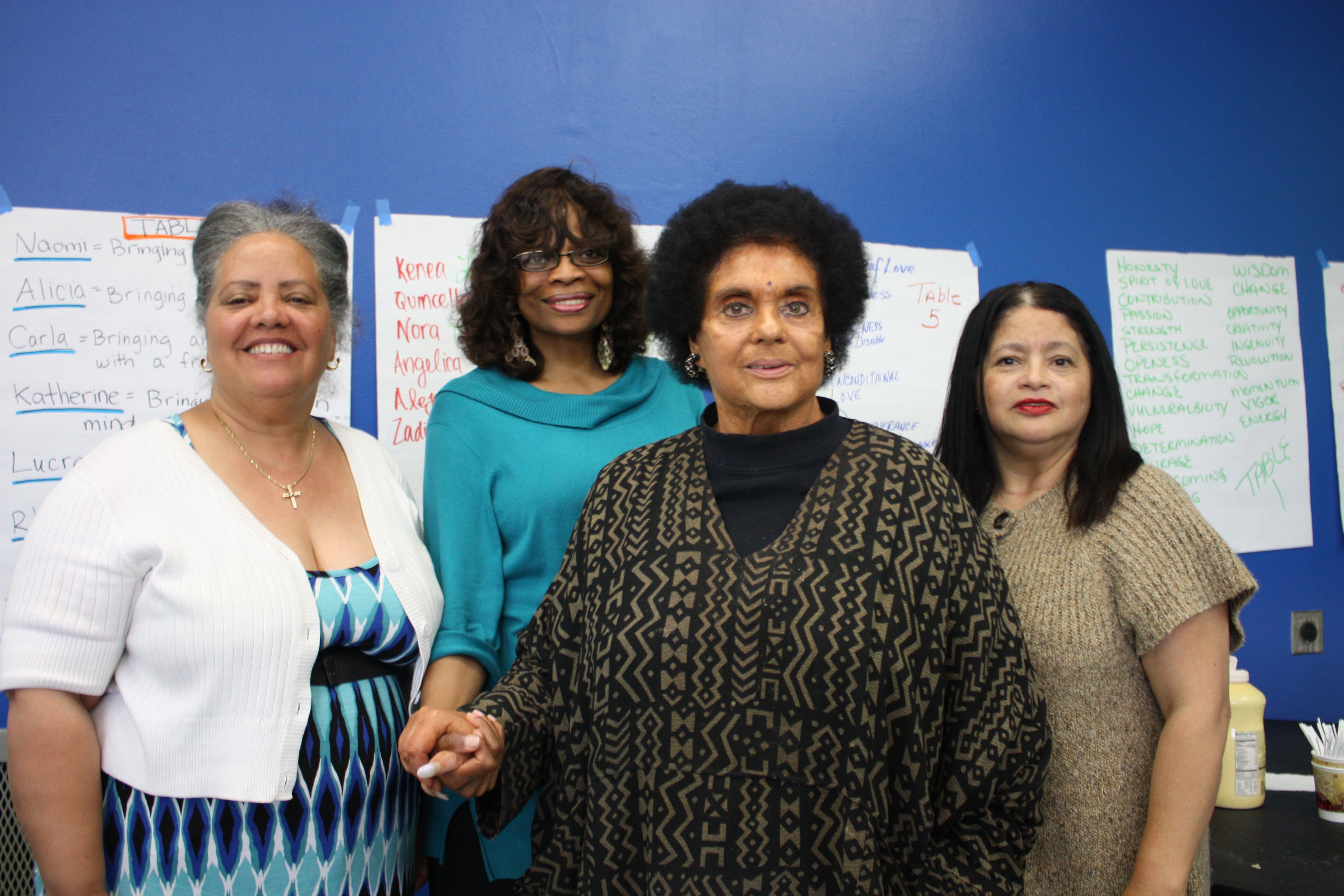 The women stood in a large circle. With their eyes shut and heads titled toward the floor, each prayed to God to keep each other and Richmond safe. At the navel of the circle was a container with fresh flowers—a type of gift for the occasion.

The occasion— the gathering of more than 40 Latinas and African American women to heal Richmond’s racial wounds —was something that had been in the works for nearly two years, says Amahra Hicks, a board member of the Black Alliance for Just Immigration and co-organizers of the meet up.

Kathleen Sullivan, chairwoman of the Commission and president of the Black Women Organized for Political Action, said the idea to come together was born after a group of women, including herself, Hicks, Barbara Becnel of the Neighborhood House of North Richmond and Miriam Wong of The Latina Center, met during the San Francisco Mayor’s Summit for Women. The women talked about the influence women have inside their home and in their communities.

The women were there to mend the relationship between the city’s black and Latino residents so they can together tackle larger issues that disproportionally affect both communities, such as violence, immigration, limited access to jobs and quality public education.

Since the gathering at least three people have been shot and killed in Richmond and North Richmond. Overall violent and property crime rate is down by 9 % citywide, according to the city’s recent COMPSTAT data, which do not include recent homicides that happened over the Fourth of July weekend.

“Black and brown are like mother and father. We’re so much alike and fight all the time,” said one participant.

Richmond’s black population is at 28 percent, according to the latest data from the American Community Survey. Latinos make up 35 percent of the city’s population.

The women spoke candidly about the underlying cause of racial tension and the paths to possible solutions. One woman said Latino men are taking the jobs that were once held by black men. Another woman said there’s a perception that soccer leagues made up of Latino youth aren’t open to black children, which is creating resentment among some residents.

Katherine Webster said she remembers growing up in Richmond. When she played at the park, black and white adults, regardless of whether they talked to one another, always made sure she was safe. They often invited her to join their games or birthday festivities. But Latino families aren’t doing the same for children outside their own community even though both Latino and black youth are being killed by street violence.

“Our children weren’t invited to join in your soccer games,” said an emotional Webster. “We are losing our children and we need help.”

During the half-day program, the women broke into smaller groups. The mini sessions were to break down myths, misconceptions and start building trust among the women. In one session, the women were asked to share an intimate experience of a time when someone hurt them. The exercise was to teach the women to forgive. It was also an exercise in trust. At the end of the session, some women cried and held each other.

In another session, the facilitator asked women to share something they value. The answers ranged from working hard and being bicultural to honoring their word and valuing their families.

“How many of you value family?” the facilitator asked the women in the room.

Everyone one of them raised her hand.

When it was time to share something they had learned from someone in the group, one woman said, “Despite appearance there’s no separation between me and you.”