Violence and Faith in East Oakland 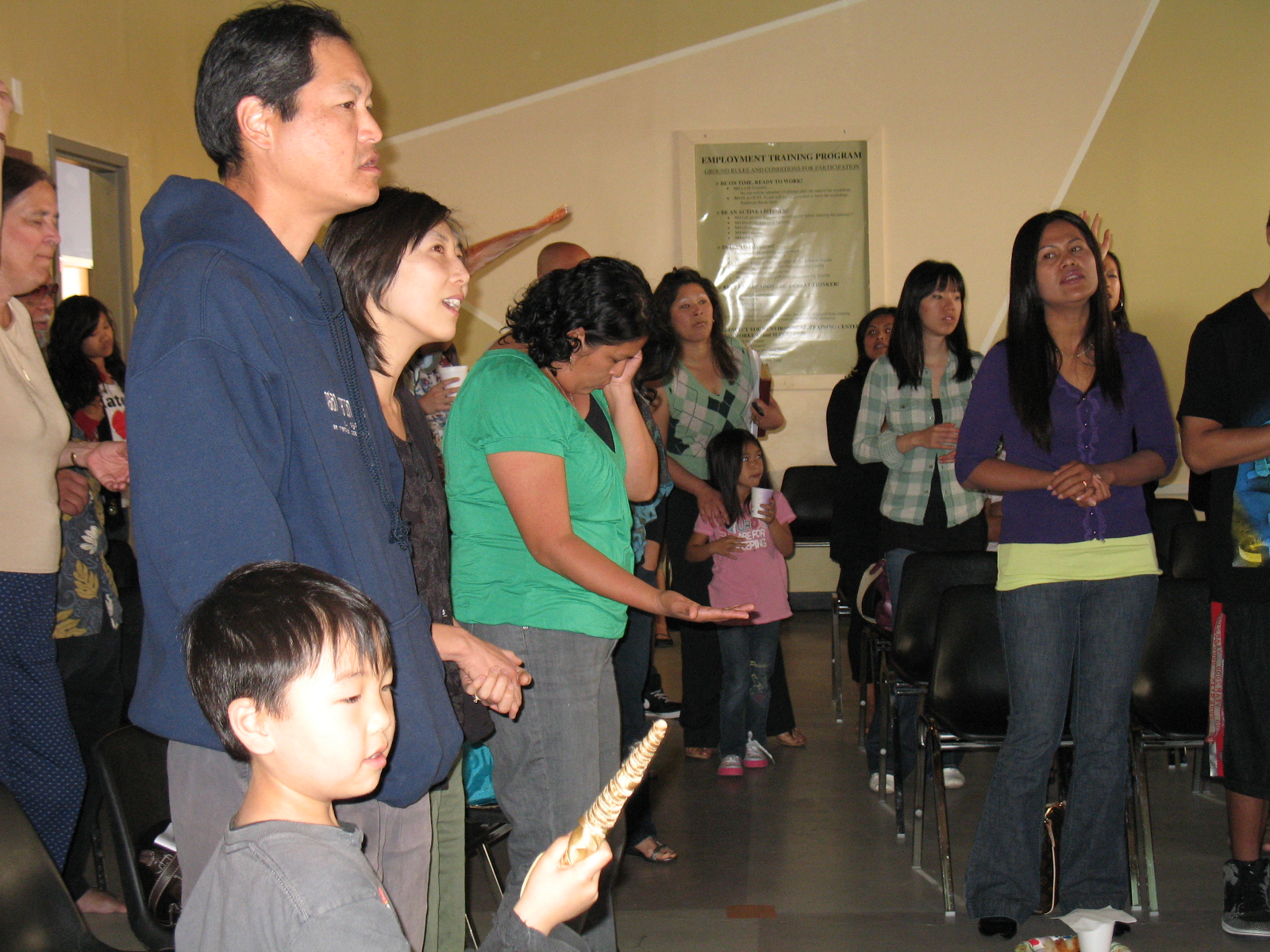 In the past three years, two bullets shattered the front window, a teenager was shot just outside and the downstairs neighbor was mugged. Before that, a woman’s lifeless body was unearthed from a dumpster less than a block away.

But this area of East Oakland — where the neighborhoods of Fruitvale and San Antonio meet — is where Dr. Joan Jie-eun Jeung chooses to live with her husband and their six-year-old son.

“I just can’t imagine living anywhere else,” says the 39-year-old, Harvard- educated pediatrician, who pronounces her first name Jo-anne. “Once I became a mother, I struggled with it…. We know we’re putting our son in harm’s way and wonder if he’ll forgive us…Some members of our church told us they’d be out of here if they could, and they don’t understand why we choose to live here.”

Their home is where 25 percent of the population lives below the poverty line and barely 50 percent of the adults graduated from high school. There are people who only go outside in daylight. But with more than 40 percent of the residents foreign-born, this community has African-American, Latino and Tongen churches, Southeast Asia American shopkeepers, and Euro-Americans. Language is lush with conversational Spanish, Cambodian, Vietnamese, Cantonese, Mien, Bosnian, and more recently, Burmese.

This community is what Joan Jeung, a Korean-American doctor, and husband Russell Jeung, a 47-year-old Chinese-American college professor, crave.

“Part of what we have to give our son,” says Joan Jeung, “is an education in justice, compassion, diversity, and community.”

After graduating from Harvard University, Joan Jeung completed UCSF School of Medicine and went on for a Masters of Science degree in social medicine from UC Berkeley. Russell Jeung, an associate professor in Asian American studies at San Francisco State University, received his education at Harvard, Stanford and UC Berkeley.

But the last thing they want for their son is a sense of entitlement.

“You can tell your kid about equity, but we’re trying to model it,” says Russell Jeung. “With my education, I was brought up to be competitive, not compassionate. I value compassion more and that’s what I want for Mathew, who will go to public schools.”

In his opinion, “Suburbia, where you mostly live for yourself, is more ‘dangerous’ than living here in community. Raising families together — cooking for each other and caring for each other’s kids — is ‘safer.’ And you don’t need to hire babysitters!”

The Jeungs are joined by other educated and employed parents who helped establish New Hope Covenant Church. A storefront church, it has social justice activist roots in the neighborhood dating back to the 1980s and immortalized in the recent documentary film, “The Oak Park Story.”

“We’re all asking what it means to be a good neighbor,” says Joan Jeung. “If you want to say you care about community, you have to share in the good and the bad.”

Good happens for them every Sunday morning, where an average of 45 adults and children (and often as many as 80) come together in a large meeting room at the offices of the Youth Employment Partnership, 2300 International Boulevard. The congregation has included social workers, high school dropouts, PhDs, ex-gangsters, teachers, refugees from Southeast Asia and Latin America, and “refugees from the suburbs” who, as Joan Jeung puts it, “are looking for a more radical and meaningful life.” Unable to find an evangelical Christian service like it, many drive there from other neighborhoods.

There is Dan Schmitz, 48, lay pastor of the congregation, who remembers calling his hometown, Burlingame, “Boringame,” because “nothing happened there.” His father was an engineer at Bechtel Corp. They were Catholics, he says, “who talked about the poor when we went to church, but there weren’t any poor people around.”

There is Carlos Flores, 39, a preventive health educator at nearby La Clinica de la Raza, who grew up in “a somewhat privileged home” in San Jose and graduated from UC Berkeley with a political science major.

Among others, including two Jeung house roommates who work in public interest law and a Christian ministry, there is a live-in commitment to this neighborhood that spans 15 years. It started with Schmitz, Russell Jeung and Flores living with Cambodian and Latino families in the Fruitvale Oak Park Apartments, where the landlord ignored raw sewage floods, leaky roofs, infestations of vermin, and mold. Along with a slew of attorneys, these newer tenants organized the others to file a lawsuit. After three years – in 2000 — 45 resident families shared a $1 million settlement. The apartments were rebuilt and the church transformed the crack house facing the street in front of the apartments into a pre-school.

Schmitz was the first non-refugee resident and only Caucasian. Then came Russell Jeung, who originally moved into the apartments to study Asian youth gangs for his master’s thesis in sociology and with the others organized tenants against drug dealers. Joan Jie-eun had moved into the neighborhood in 1999 and joined them tutoring, mentoring, cooking, praying, and establishing New Hope.

At first, 33-year-old Tracy Saephan viewed them as if they were outsiders. Born in Thailand, she was raised and lived in this East Oakland neighborhood most of her life.

“I was young when I met them, but I wondered what they wanted, what their ongoing commitment was. Long-term was five years to me, and I wondered if they were in it for the short-term. A lot of us who grew up in the neighborhood were exposed to things to make money like gangs, prostitution, drugs—easy stuff. For me, it was okay to have sex before marriage, not like what we want now for our children. We were surviving, not knowing what doing ‘the right thing’ was.

“It didn’t take that long to see that this group came in full of mercy for the community. You could feel their generosity. We started meeting at homes. Maybe there were 10 or 12 of us. They had the heart to bring us together. In time, there was such a big transformation with the Oak Park Apartments that it was clear they weren’t outsiders any more. They wanted to be with us. They were gifts to the neighborhood.”

Today, Saephan lives with her husband and three children seven miles away, near Diamond Park. She sells real estate and her husband runs his company that sweeps parking lots at night. On the church board of directors, she prays with her old neighborhood friends every Sunday.

Neighbors who are neither religious nor members of New Hope Covenant Church also accepted the Jeungs and their educated friends, according to Tane Oubkeo. Born in Thailand as well, the 28-year-old unemployed auto mechanic lived in the neighborhood since he was 5.

“After people experienced the incredible change with Oak Park, they accepted them as neighbors. Before Russell and Joan, you wouldn’t see white people walking around and saying hi to neighbors. Today, it’s more of a reality. There’s a block party every year and you can tell that that the founders of New Hope are neighbors, like everyone else.”

Before he met his wife and started attending the church, Oubkeo says he was a teenager involved in “drug dealing, gang banging, robbing, stealing cars.” He could have lost his life “maybe five or six times.” Saw a friend get shot in the head.

Once incarcerated for a week for joy riding, he started listening hard to rap artist Tupac Shakur on God. Oubkeo was primed to work and pray for forgiveness and change.

“I didn’t think much about Joan and Russell when I met them,” he says. “I realized that they could live anywhere—in the house in the hills, for instance. We’d go over to their house and they’d come over to ours. We had community dinners and hang out for each other’s birthdays. We have a genuine friendship, fellowship. Only in the body of Christ could someone like me and Russell hang out. No way we’d know each other in this world any other way. Without God, Russell would probably look down on me, who’s from the ghetto. But we see each other as brothers and sisters.

“Some church goers see each other on Sunday and just say, ‘hi’ and ‘bye.’ Not us. In this congregation, we know each other, we have deep conversations, we support each other, pray with and for each other. It really helps.”

These days, Oubkeo lives near Lake Merritt with his wife, Keo Kong, who grew up in the Oak Park Apartments, and their infant son and five-year-old daughter. They visit her parents often in the neighborhood and attend the church every Sunday.

These Christian activists turn the tables on the stereotype that configures an Ivy League education into a formula for fame and fortune. They see East Oakland differently from outsiders, many of whom pigeonhole it as a place where people care little about improving their lives.

The doctor in their midst explains “the real story” with one word that Americans of every class understand: Stress.

“Every parent wants the best for their child and it’s no different in this neighborhood,” Joan Jeung says. “Today, parents in better neighborhoods give their own money to schools. Here, parents don’t have enough money to do that. When this neighborhood fundraises, who gives? Others in the same situation.”

The physician resides in two worlds in East Oakland. She is a hospitalist at Children’s Hospital, where she cares for children who have to be kept in the hospital. She volunteers a few days a month with homeless children. She cares fulltime for Asian immigrants and refugees at the new Lake Merritt site of Asian Health Services, which dovetails with a needs assessment her husband is doing on refugees from Burma living in Oakland. For his part, Russell Jeung partners on this project with community groups such as Burmese Refugee Families Network, Street Level Health Project and the Asian Health Clinic.

“We talk about our families…I have learned so much hearing the ups and downs of living poor and/or undocumented, of living as a woman in what is still a largely patriarchal culture. It’s hard to remain apathetic when you see and feel the struggles of your friends and neighbors.”

Mental health issues are Joan Jeung’s focus when she speaks about what this area needs besides resources as basic as a playground. “As a physician as well as a resident, I’ve seen plenty of depressed and suicidal youth. I even remember an eight-year-old who made suicidal gestures with a kitchen knife. In clinic as well as in community, I’ve seen plenty of Post Traumatic Stress Disorder and other mental illness which clearly affects parenting. Domestic violence is common. I’ve often wished that we had mental health providers as well as regular social workers housed under the same roof so that referrals could be made immediately. That way, we could build a relationship between a counselors and parents who need to be convinced that their child is suicidal.”

Joan Jeung believes most in “wellness”—prevention before treatment becomes necessary. Clinics and schools should provide free, preventive programs such as anger and stress management, communication/conflict resolution, parenting and nutrition/fitness, she says.

“We need a system that creates preventive, inter-disciplinary care that meets the needs of the whole person and family, not just diseases in isolation. We need a system that doesn’t create long-term dependency, but cultivates the capacity of people to care for themselves and others.”

You don’t have to live in East Oakland to understand this, she says. But it helps.

Hilary Abramson is a veteran California journalist who has specialized in recent years in telling health policy stories.

Violence and Faith in East Oakland