California unemployment: the causes and implications for the future 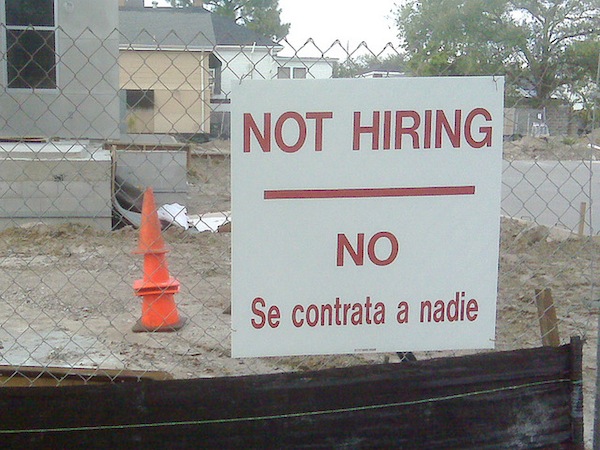 What are the causes of the current high unemployment rates in California and what does that mean for the near and medium term economic future?

Steep declines in construction spending and jobs are the primary reason why California’s unemployment rate is so much higher than the national rate. From 2005 through 2009, California experienced a 60% decline in construction spending adjusted for inflation, from near $100 billion in 2005 to just under $40 billion in 2009, compared to a 25% decline nationally. And the state saw a decline of 83% from the peak in residential unit permits (209,000 in 2005 down to 36,000 in 2009) compared to a 72% decline in other states.

The state saw massive job losses related to the construction decline—job losses that were larger than experienced nationally—and which explain why the state’s unemployment rate and job losses surged ahead of the national average.

California lost 33% of the state’s construction jobs between December 2007 and December 2009 compared to 24% for the nation. And California experienced larger job losses in construction-related manufacturing and retail trade sectors and well as larger losses in finance and real estate.

What are the Implications of These Data?

California’s deeper recession was caused primarily by a large cyclical downturn in construction with a contribution also from a large downturn in foreign trade related to the worldwide recession. And the data also provide some information on what did not cause California high unemployment rate—above average manufacturing job losses or a falling share of venture capital funding.

VC funding recovered in the first two quarters of 2010 and the state’s share of U.S. funding reached an all-time high of 52.7%. The state’s manufacturing job losses outside of construction were less than in the nation. So manufacturing did not cause the state’s higher unemployment rate.

The motion picture sector, led by gains in TV and commercial filming, has been outpacing the nation in job growth since the large share losses that occurred ten years ago. The state’s share of national jobs, which has been increasing since 2003, jumped in 2010 partly as a result of the state’s new tax credit.

And trade volumes are increasing throughout California as both exports and imports are growing again as the nation’s trade with Asia is growing.

So, unlike in the aerospace or dot.com recessions, the state’s economic base did not experience any losses that are likely to persist over time.

Still there are Near-Term and Long-Term Economic Challenges

The state is in the beginning of a painfully slow recovery in job levels. It will take 1to 2 years before residents feel like the economy is recovering and another 1 to 2 years before unemployment rates approach even 6 or 7%.

Housing and overall construction spending will only slowly recover. In the 1990s it took almost seven years for housing prices to regain 1990 levels and for construction to pick up appreciably. But housing will eventually recover as the state will add from 400,000 to 500,000 residents per year over the next decade.

The policy and political debate in California should be about the future, not the present or the past. There is little that governors or state legislatures can do to accelerate recovery from recession and their failure to admit the limits of state power simply confuses people and deepens cynicism about government.

States do not have the tools that the federal government has and recent events show the limits even of great federal power over interest rates, taxes and spending in the face of the recession, financial market turmoil and great loss of wealth for many households.

But governors and legislators do have the power to shape the public foundations in California that are critical to attract private investment and job creation. Here the problem is not lack of tools but disagreement over the best way to bring long-term prosperity to California.

Addressing these issues and not pretending to be able to create jobs next year would be a good place for candidates in California to focus. Such a move might restore a measure of truthfulness to public economic and budget debate and help voters better understand the policy choices among candidates and how that will affect them and the state.

Steve Levy is director of the Center for the Continuing Study of the California Economy.

California unemployment: the causes and implications for the future