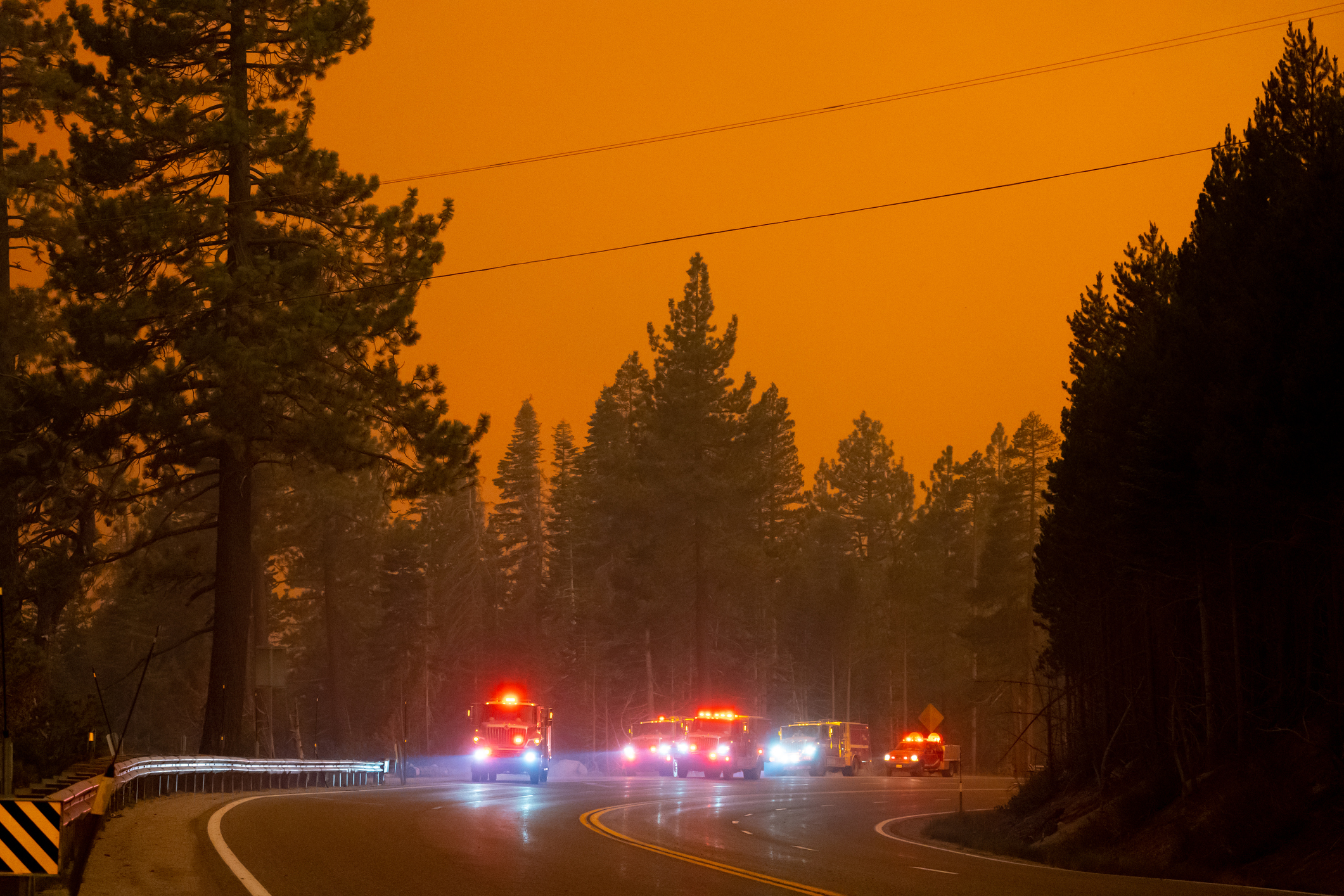 During the Caldor Fire in the Lake Tahoe area in 2021, a local domestic violence agency stepped in to help evacuees. Photo by Kara Capaldo/iStock.

During the Caldor Fire in the Lake Tahoe area in 2021, a local domestic violence agency stepped in to help evacuees. Photo by Kara Capaldo/iStock.

It’s been more than three years since the Camp Fire leveled the California town of Paradise. But for domestic violence counselor Marlen Hernandez and the clients she serves, the traumatic effects continue to rage.

About six months after the fire in November 2018, calls for help to Catalyst Domestic Violence Services in nearby Chico where Hernandez works surged and remained high for the rest of 2019. The agency went from helping 122 Camp Fire survivors affected by domestic violence during the first six months, to 223 in the six-month period after that. Associate Director Jackie Kent believes people in domestic violence situations initially put off asking for help as they faced the immediate emergency of the fire and its aftermath, but began calling once their basic survival needs were met.

“It shook their lives completely,” said Hernandez, a Paradise native whose family was among those displaced by the fire. “A lot of them are still carrying severe trauma … It’s not just the intimate partner violence aspect, but they suffer from PTSD from the fire and that’s affected their relationships and also their mental health.”

For Hernandez, helping clients from the area who’ve experienced intimate partner abuse invariably requires addressing the toll the fire exerted on their lives as well.

Many lost homes, people they loved and a sense of stability in the fire. Some endured domestic violence for the first time or were forced to stay in violent relationships because they had nowhere else to go. Others still have panic attacks and nightmares about fleeing the flames

The Camp Fire killed 88 people, destroyed almost 19,000 buildings and racked up $16.5 billion in damages. But some of the destruction wrought by this and other wildfires is harder to see.

Reports of intimate partner abuse skyrocket in the wake of these natural disasters, according to people who work with survivors of domestic violence. Yet many communities are ill equipped to meet the increased need for social services, housing and mental health support.

Some domestic violence agencies are responding by turning to other domestic violence shelters outside of their region for help when wildfires strike, or by stockpiling gift cards for gas, food and hotel stays to give to survivors in need during evacuations.

But state and local governments must do more to ensure the needs of domestic violence survivors are accounted for in disaster response plans and long-term recovery efforts, experts said. As wildfires and other natural disasters increase due to our warming climate, so too do risks to domestic violence survivors and others vulnerable to abuse during times of disruption.

Because ​​about 1 in 4 women and nearly 1 in 10 men will experience physical or sexual violence or stalking by an intimate partner during their lifetime, disaster planning that doesn’t listen to the needs of domestic violence survivors can leave a vulnerable population to cope on their own – in some cases endangering their lives, advocates said. In fact, intimate partner violence can end up posing an even greater threat to people and families’ long-term wellbeing than the disaster itself.

“When it comes to trauma and intimate partner violence and community violence, these things are a lot trickier to recover from and they take a longer time to recover from” than the physical destruction from wildfires, said Annie Rosenthal, a Bay Area social worker and lead author of research into the health and social impacts of California wildfires.

“Going forward we’re going to need to have more attention paid to some of the long-term effects, the ripple effects.”

A city scarred by fire

Last year, the Caldor Fire forced the entire city of South Lake Tahoe to evacuate for more than a week. Chelcee Thomas and her team at Live Violence Free, a local domestic violence agency, found themselves grappling with an unprecedented set of challenges.

As they evacuated survivors from the agency’s safe house, they had to figure out transportation options for clients without cars or money and make sure they didn’t end up in the same shelter as a former partner who had made their life hell. They needed to make sure the survivors had a safe place to turn to – so they didn’t return to their abusers out of fear or desperation. Thomas and her team did all of this while also evacuating themselves and their families.

The chaos didn’t stop there. In the weeks after the evacuation orders lifted, the agency’s crisis line did not stop ringing.

“There was a moment where 75 percent or more calls were this post-evacuation need,” Thomas said. “I need emergency shelter, I need a restraining order, I need mental health support because of what happened to me and my children.”

Mercedes Tune, a program analyst with the California Partnership to End Domestic Violence, said she’s seen this pattern play out at other domestic violence intervention agencies she’s worked with in Central and Northern California. After a fire, demand for services always increases.

“It’s really understandable because if we consider that domestic violence is about power and control, then in these situations where there is uncertainty … that increases the prevalence and intensity of domestic violence,” she said. Disasters “involve an increase in emotional trauma and stress.”

Studies and anecdotal reports from around the world show that disasters intensify the risk of gender-based violence, particularly among people who are already vulnerable because of  factors such as poverty, isolation or disenfranchisement. One 2009 study of people displaced by Hurricane Katrina found that rates of intimate partner violence tripled immediately following the disaster and remained high more than a year afterwards. Another study published in 2018 found that counties in Florida saw a sharp rise in assaults following hurricanes there. Other disasters such as floods, earthquakes and the COVID-19 health emergency have also been tied to increases in domestic violence.

“When there is disarray and a disruption to the community there’s an uptick,” Rosenthal said.“People are under a lot of stress. Stress and trauma go hand in hand.”

Those who are desperate for a place to stay may resort to living with someone who causes them harm, Rosenthal explained.

Hernandez saw scenarios like this play out among her clients following the Camp Fire. In one case, a woman felt pressured to allow her then-boyfriend to move in with her because he’d lost his home in the fire. The relationship turned violent, Hernandez said, but it took more than three years to get him to leave. She believes the woman’s distress from experiencing the fire affected her ability to take action.

“She felt stuck, she felt frozen,” Hernandez said. “Because her body was experiencing severe trauma from the fire, I don’t think she was able to really deal with, ‘OK, how do I get out of this relationship?’”

‘One conversation can change a life’

In interviews with health and social service workers following major fires in California, Rosenthal and her research team found that the resources available were not enough to help people stabilize emotionally, financially and physically over the long term. Hernandez, the counselor in Chico, said she sees a huge need for greater mental health support in communities impacted by wildfires. Increasing the availability of mental health and other social services during and after disasters would help those who experience violence, and also reduce the risk of violence occurring by reducing stressors on families, she said.

“High stress, losing employment, losing housing, all these things are risk factors that increase the chances of intimate partner violence happening,” she said. “So if there were more services available for families, for folks that have experienced this, I feel like it would give a chance to have folks less isolated, more supported.”

Back in South Lake Tahoe, Thomas and her team have been trying to reach more people experiencing domestic violence by educating the whole community on how to recognize signs of violence and where to seek help.

During and after the fire, the agency’s “One Conversation” campaign urged people who may have taken in friends or family during the evacuation to be on the lookout for domestic violence red flags and point them to resources. The agency hosts a bimonthly podcast on the topic and distributes information through community events and on their website.

Education campaigns are a useful tool to raise awareness about domestic violence, especially during and after disasters when the prevalence is known to increase, said Tune, who works with the California Partnership to End Domestic Violence. Agencies that work with domestic violence survivors can also strengthen their response to the problem when wildfires occur by developing connections with other relevant organizations and people in their communities such as food distribution centers, legal aid offices, health care providers and housing agencies.

But to truly address the problem, policymakers must also look at the bigger picture and take action by combating climate change, improving forest management to prevent wildfires, and working to change social norms so that domestic violence no longer occurs, Tune said.

This story is published through the Equitable Cities Reporting Hub for Environmental Justice, an initiative led by Grist and Next City.