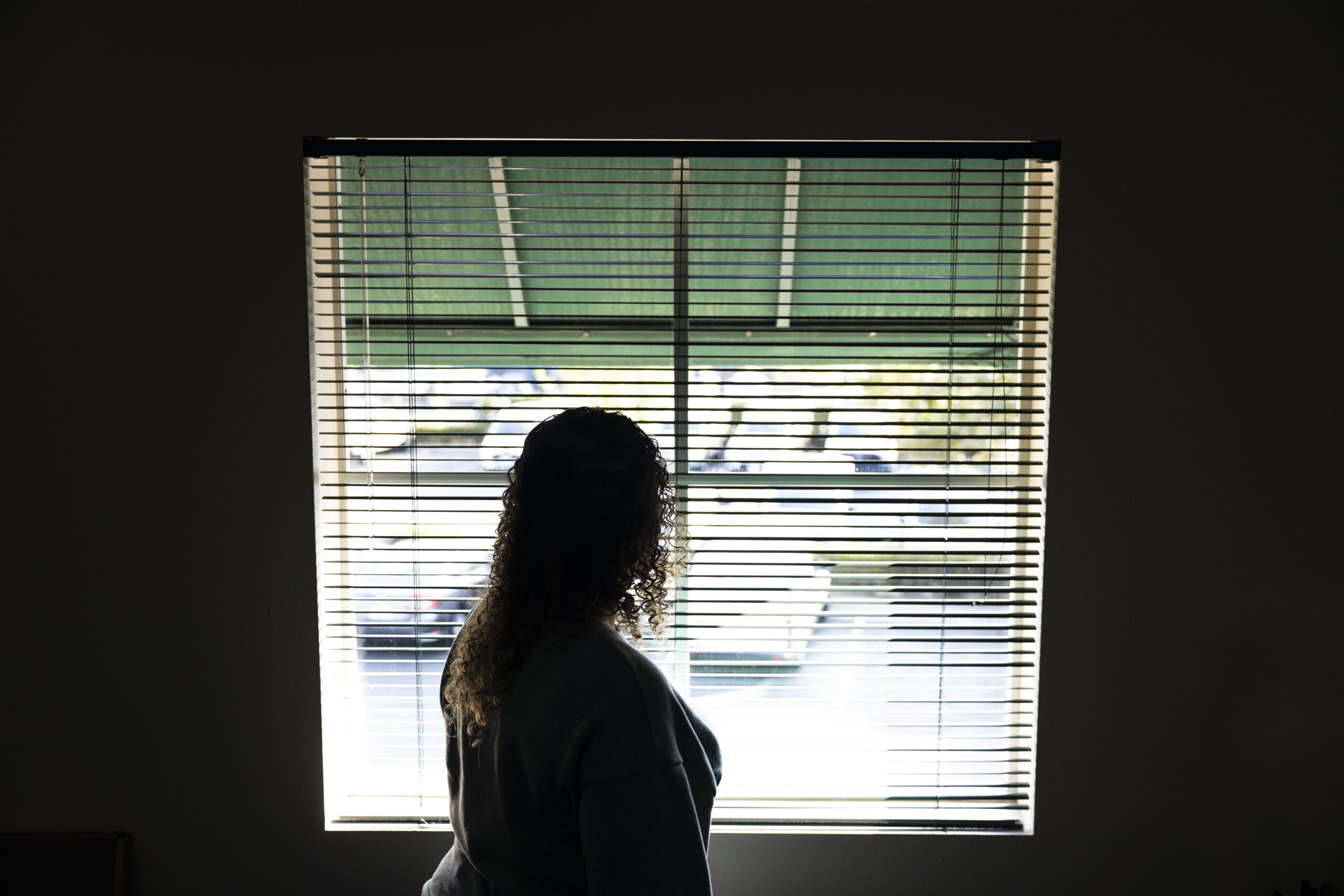 Lydia, a domestic violence survivor, felt trapped during the pandemic because her husband was home all the time and everything was closed. Photos and video by Martin Do Nascimento / Resolve Magazine

The Pandemic Spurred a Domestic Violence Epidemic. It’s Not Over Yet.

Lydia, a domestic violence survivor, felt trapped during the pandemic because her husband was home all the time and everything was closed. Photos and video by Martin Do Nascimento / Resolve Magazine

For Lydia, 40, of southeast Los Angeles County, there was nothing safe about staying at home during the COVID-19 pandemic.

Being home meant being stuck with her abusive husband who beat her and tried to control her every move. The abuse predated the pandemic – her three children went to live with a family member in 2018 because of it. But when Lydia’s husband lost his job because of the shutdown, he became angry and bored, and the violence escalated. Every day, he would surveil Lydia over Bluetooth while she continued to work her job at a trucking company. He’d wait to make sure she arrived home immediately afterward, without time to stop anywhere on the way. When she walked in the door, he’d take away her cell phone, paycheck and keys. And when he got upset—which happened ever more frequently as the pandemic wore on—he became dangerously violent, Lydia said.

“I was getting beat because he had no money, because there was no meat at the market. Everything became my fault, and I just became a punching bag,” said Lydia, who asked that her real name not be used because she still fears for her life.

Worst of all, because of the pandemic and social restrictions, Lydia felt she had nowhere to turn.

“Where could I have run to if everything was closed? Where could I have gone and gotten safe?” she said. “The world went on lockdown, so how did I know that the police were going to come and help me, if there was millions of people dying?”

Lydia’s experience is far from unique. Since the pandemic began, California organizations that serve domestic violence survivors report getting more requests for help than ever before and hearing more stories of extreme abuse. In many cases, the abuse began before the pandemic but spiraled as people found themselves confined at home, and families faced increased stress due to economic instability, illness and overall uncertainty. Calls to the crisis line at Sierra Community House, for example, an organization that helps survivors of domestic violence, sexual assault and child abuse in the Truckee and Tahoe area, jumped 200 percent between January 2020 and January 2021, said Crisis Advocacy Supervisor Jennifer Garcia Perez. Human Options, which runs a shelter, crisis line and nine drop-in centers for domestic violence survivors across Orange County, saw requests for help rise by 50 percent after stay-at-home orders went into effect last year, said Chief Executive Officer Maricela Rios Faust.

Rather than diminish, this trend has persisted as society reopens and survivors feel better able to seek help because they’re no longer trapped at home or worried about getting the virus, advocates said. And as survivors and their children resume in-person activities, the people who interact with them, such as family, friends, teachers, and medical professionals, are increasingly noticing and reporting abuse.

“Survivors are saying, OK, now’s the time I can actually leave, because before they were worried about if it would be safe to go to a domestic violence shelter (because of the virus),” said Marissa Seko, a manager at the Family Violence Law Center in Oakland, which works with survivors in Alameda County and is responding to almost double the number of incidents as it was before the pandemic.

“Now people are feeling like, well, maybe there are more options, or maybe it’s easier to go stay with a friend or family member than it was before,” she added.

Waiting for the pandemic to end was not an option for Lydia. By last summer, she was racking up injuries—a slice through her hand where her husband cut her with a knife, a painful wound to her knee over which he’d broken a glass vase. He would kill her if she didn’t leave soon, she thought.

Earlier in the year, she used her work email to contact the Human Services Association in Bell Gardens, which runs a housing assistance program for survivors of domestic violence called Domestic Violence Housing First. The organization offered to pay the deposit and first month’s rent on a new apartment. It was hard to find a place to rent during the pandemic, but at the beginning of July, Lydia finally found one. With the help of Human Services, she immediately booked herself into a hotel to wait for the rental contract to go through.

“I was so tired. I was so done,” she said of life with her husband. “I just couldn’t take it no more.”

For organizations that help survivors like Lydia, meeting the demand won’t be easy. Not only are more survivors coming forward, but those who do often have greater medical, emotional and economic needs than prior to the pandemic, advocates said. Like Lydia, many have endured life threatening and prolonged abuse. And the economic fallout from the pandemic means survivors are more likely to need help securing housing and other basic needs.

In a typical year at Human Options in Irvine, about 10 percent of survivors admitted to the shelter report that they had been strangled or assaulted with a weapon, said Faust. But in 2020, about half of shelter occupants reported suffering these deadly forms of abuse, she said. Staff are also encountering more stories involving other types of extreme violence. One survivor, for example, was held hostage in her home during the pandemic. Her abuser blocked off the exits to the house and put her under camera surveillance, Faust said.

“It’s not necessarily that being home made the (abuser) violent,” she said. “But the escalation occurs because there’s no reprieve from tension.”

In Alameda County, staff at the Family Violence Law Center have noticed a big rise in financial and housing insecurity, which puts survivors in more precarious positions and makes it harder for them to leave their abuser, said Seko. She attributed this to pandemic job losses, and the impact of school closures on some survivors’ ability to work. The organization also runs a Domestic Violence Housing First program. The number of clients in the program is up by more than a third this year compared to 2020, said Seko. As of June, the center had already spent 70 percent of its funding for the program.

“People’s financial situations have really hit the wall,” she said. “Now, after a year, they’re really at a point where they can’t anymore.”

Additionally, organizations had to adapt their services to the realities of the pandemic. Although many are now returning to in-person services, crisis intervention advocates such as Monse Torres at Sierra Community House, spent months meeting with survivors over the computer or phone, because it wasn’t safe to meet in person. That, along with court closures and pandemic policy shifts, made it even more difficult to help survivors, she said.

The budget also includes $15 million for sexual and domestic violence prevention programs, primarily directed at youth and people who work with them. This restores funding that lapsed last fiscal year due to the pandemic.

What’s needed now is a more permanent stream of funding for prevention programs and a federal fix to restore funds under the Victims of Crime Act, said Krista Colon, public policy director for the California Partnership to End Domestic Violence. Only by making funding long-term and sustainable can California begin to eradicate the societal norms and conditions that allow violence to flourish, she said.

People also need to come together at the community level to tackle domestic violence, said Faust. During the pandemic, her organization ran Facebook live sessions for community members explaining how to look out for others, such as neighbors and family members, who may be experiencing domestic violence. The sessions also provided tips on how to proceed if there’s a strong possibility that someone is being hurt.

“That’s important—our community really coming together to demonstrate and to show that we care for survivors, and abuse is not OK,” she said. “Not allowing this to go back into the shadows is important.”

For Lydia, the effects of the abuse she experienced continue to linger, even though she is now safely rehoused. She has numerous physical ailments, including ongoing problems with her knee and hands, and is receiving therapy for the emotional trauma she suffered, while continuing to work and pay her bills. She’s also trying to regain custody of her three children.

The Pandemic Spurred a Domestic Violence Epidemic. It’s Not Over Yet.