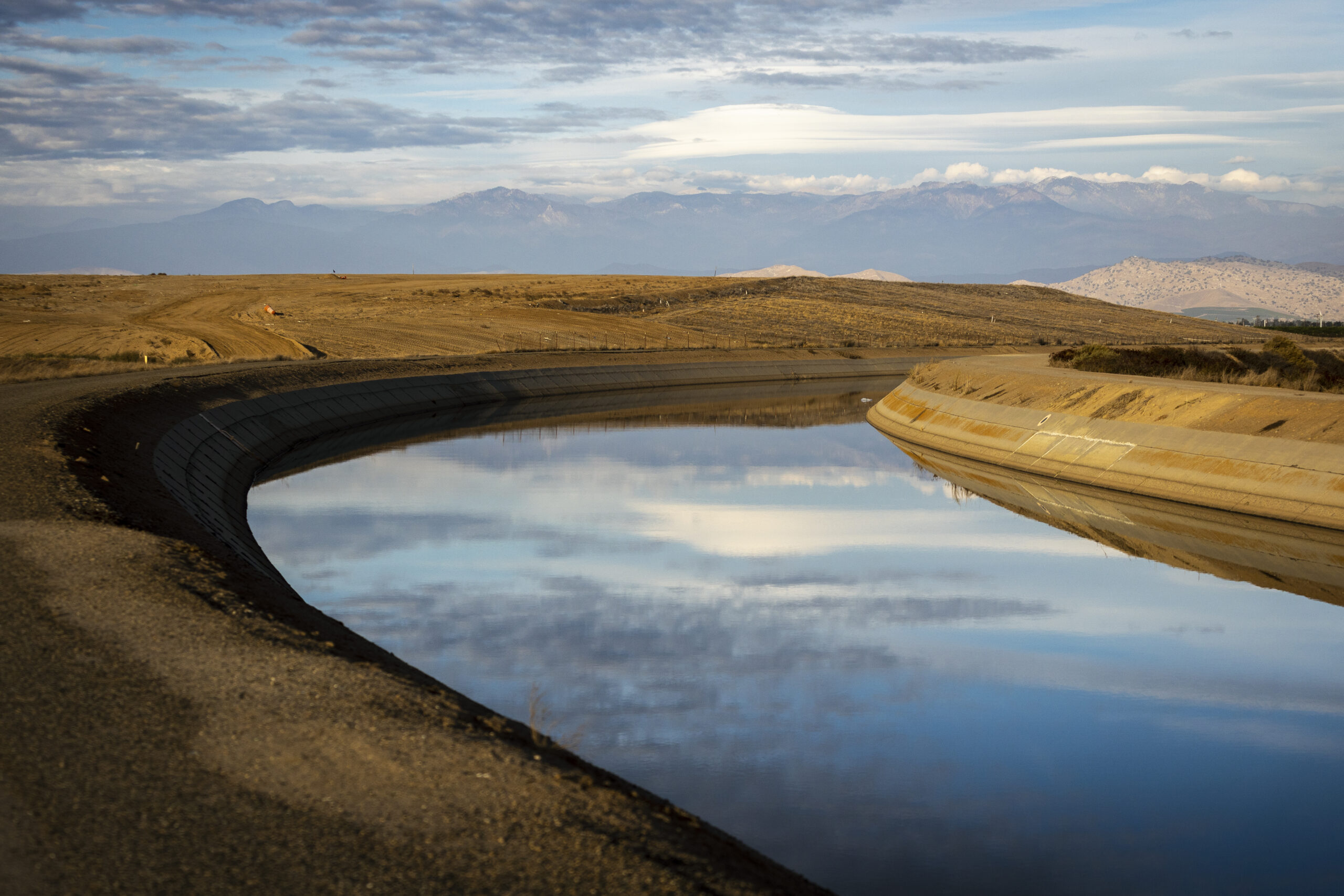 The Friant-Kern canal passes through Terra Bella, with the Sierra Nevada mountains in the background. The subsidence causing water flow issues in and around Terra Bella is difficult to perceive visually as it spans a 30-mile stretch of the canal. Photos by Martin do Nascimento.

The Friant-Kern canal passes through Terra Bella, with the Sierra Nevada mountains in the background. The subsidence causing water flow issues in and around Terra Bella is difficult to perceive visually as it spans a 30-mile stretch of the canal. Photos by Martin do Nascimento.

This piece is part of a collaboration that includes the Institute for Nonprofit News (INN), California Health Report, Center for Collaborative Investigative Journalism, Circle of Blue, Colorado Public Radio, Columbia Insight, The Counter, High Country News, New Mexico In Depth and SJV Water. The project was made possible by a grant from the Water Foundation with additional support from INN. For earlier stories in the Tapped Out series, click here.

California’s San Joaquin Valley is one of the richest agricultural regions in the world, but growers there have a problem: Unfettered groundwater pumping has caused the land to sink and the regional canal system to break.

If the agencies in charge of the canals don’t fix them, water deliveries to thousands of farms and some cities across the valley’s $25 billion agricultural economy will continue to be affected, impacting everyone from farm owners to low-wage farmworkers. But repairs are complicated and expensive.

The Friant Kern Canal –– the waterway that is furthest along in repairs –– will eventually cost nearly $1 billion to fix. The 152-mile-long canal pulls water from the distant San Joaquin River through monocropped acres of vines, trees and vegetables. It is an essential artery for agribusiness, and so growers and their irrigation districts — and the politicians who represent them — want the expenses to be partially covered with taxpayer money.

But there’s an issue with the sales pitch. Proponents claim that repairing the canal is vital for the millions living in nearby towns and cities. This is technically true for some canals and some communities, but in the San Joaquin Valley, 90 percent of Friant Kern’s water is used for irrigation, meaning that very little goes to the majority low-income Latino farmworker towns most vulnerable to the impacts of drought. Nearly all of these towns rely on groundwater, not surface water, and projections show that the over-extraction of that resource is only getting worse. There’s no clear evidence that the proposed canal fixes will directly benefit these vulnerable communities’ water access.

On a hazy day in mid-October, I met Doug DeFlitch, the Friant Water Authority’s then-chief operating officer, near Terra Bella, California. DeFlitch, a tall man and a measured speaker, shuffled back and forth with his hands in his pockets as we talked. His job, among other things, involved managing the operation of the Friant Kern Canal. (DeFlitch recently left the water authority.) We stood together at the canal’s lowest point — what DeFlitch calls the “pinch point” — a few paces from the placid water creeping south. “This is ground zero,” DeFlitch said, “the bottom of the bowl. We are unable to get as much flow past this location as we once used to.”

The reason that the Friant Water Authority struggles to get as much flow as it used to is because overpumping has caused a portion of the canal to sink and create a large U-shaped depression. Where the gradual slope previously ferried water downhill through the canal’s boxy, open-air concrete mass without a problem, the water now gets stuck in what can be fairly described as a pit — hence DeFlitch’s “pinch point.”

The Friant Water Authority is responsible for getting Sierra Nevada snowmelt to roughly 15,000 farms and a handful of towns across a million acres of industrialized farmland. But over the decades, those surface water supplies have decreased. To continue growing crops like table grapes, almonds and pistachios –– which fetch high prices around the world –– agribusinesses, particularly large corporate growers without surface water rights, dug deeper wells and pumped ever more water. This caused the land to sink, and, ironically, the canal the industry depends on to sink along with it.

The impact of overpumping is landscape-scale and nearly beyond perception, save for certain visual clues. The county bridge, once high above the canal, now barely clears the water.

The Friant-Kern Canal is one of three state and federal canals impacted by such woes. It’s also in the worst shape: About 60 percent of its carrying capacity has been lost, meaning that farms past the pit get less water, and the water ends up costing more for others.

There have been attempts to fix this. In 2018, a state proposal would have funded $750 million in repairs along the Madera and Friant Kern Canals. It failed. Critics maintained that the infrastructure’s real beneficiaries –– private agribusinesses –– should pay for it, not the public.

In 2021, during an exceptionally dry year, the “State Water Resiliency Act” cleared California’s Senate and was poised to deliver nearly $800 million to the same effort. In this attempt, the bill covered only a third of repairs across three canals, including the California Aqueduct, which delivers water to large cities in Southern California. But in September, the bill was halted by the Appropriations Committee because lawmakers were unclear on how public funding would benefit disadvantaged communities or the public –– one of the measure’s central claims. According to Kyle Jones, the policy director at Community Water Center, an environmental justice organization, it also lacked adequate public oversight and accountability.

“The attempt to get public funding was originally structured in a way to make people think it did more than it actually did,” Jones said. “To say that rural communities should be happy because they get what’s left over from industry is the problem. We’ve seen this in the environmental justice movement forever.”

The Friant Water Authority has already secured over $400 million –– a combination of Federal grants, loans, and money from farmers most responsible for over pumping. But they still want the state’s taxpayers to pay the final third. So far, Gov. Gavin Newsom has promised a separate $200 million for canal repair funds.

If the water needs of vulnerable communities were the real priority, taxpayer funds might be spent differently, Clary said. “You could build many groundwater-recharge projects for that much.”

Tooleville, an unincorporated town of 400 people, sits underneath the east valley’s foothills. It’s entirely dependent on the aquifer, despite being bordered on its eastern boundary by the Friant Kern Canal. Gloria and Jose Mendoza live a quarter mile away from the canal. When I visited them in October, Jose had just finished pruning the pomegranate tree in the glaring sun and sunk into a camping chair to relax. Before retirement, the couple worked on farms while raising their two children, Jose said. “We were so good at picking oranges we paid off our house in 11 years.”

Like nearly all the families in the area, the Mendoza family relies on groundwater pulled from the town’s two wells, even though the Friant Kern Canal is just up the road. However, the well water is contaminated with hexavalent chromium, a carcinogen, and nitrates, the latter a consequence of agricultural runoff. Every day since 2014, they’ve relied on bottled water to drink. This past summer, one of the wells went dry after pumping caused water levels to plummet nearly 200 feet.

“It was scary. We’ve had so many problems with the water,” said Gloria, who volunteers on the Tooleville Mutual Nonprofit Association, whose mission is potable water distribution. “We’ve also had a lot of promises that have not been kept.”

Gloria is skeptical of the claim that repairs to the canal would benefit them. “We haven’t seen any benefits to this date. That public money should be used for things that are going to benefit the community.”

Proponents of publicly funding the repairs disagree. They say that restoring capacity to the canal means getting reliable surface water to agribusiness, which means less groundwater overpumping –– one cause of Tooleville’s water problems.

But plans developed by local agencies in charge of groundwater show that overpumping will continue for another 20 years, causing water levels to drop up to 200 more feet in some places, according to a study by the University of California Davis Center for Regional Change. This could cause half the valley’s 1,200 public wells and up to 12,000 private wells to go partially or fully dry by 2040.

Proponents argue that fixing the canal will help aquifer recharge during wet years, which is essential for getting water back in the ground. But advocates say it’s inadequate, and add that directly assisting disadvantaged communities with recharge is still largely theoretical.

The closest example of this in practice can be found 30 miles west of Tooleville. Aaron Fukuda, who oversees the Tulare Irrigation District, showed me a pilot groundwater recharge project for Okieville, a town of just over a hundred people. The pilot project would take canal water and inject it into the ground at a site near Okieville. Fukuda sees this as a template for how the Friant Kern Canal can benefit disadvantaged communities. “This is essentially a multimillion-dollar science fair project,” said Fukuda. “Anecdotally, we know there’s some benefits to recharge around disadvantaged communities. But we’ve never really studied it.”

Experts say few districts have done what Fukuda’s district has. The pilot project, still a parcel of land with hay bales stacked high, came to the Tulare Irrigation Distract through a philanthropic gesture by a local landowner, Fukuda said.

Recharge, at most, will only remediate 20% of overdrafted water, said Clary, with Clean Water Action, and that is a very rough estimate. Without reducing pumping, recharge won’t provide public benefits to vulnerable communities dealing with dry wells.  Reliable surface water to put in the ground is increasingly scarce as climate change eviscerates snowpack in the Sierra Nevada, the source of the Friant Kern Canal’s water.

“It’s a huge bonus for them to fix the canal and sell it by saying it’s going to help poor people,” said Susana de Anda, the director of the Community Water Center. “But it’s not true here. If they need it, they need to pay for it. It’s only going to benefit them.”