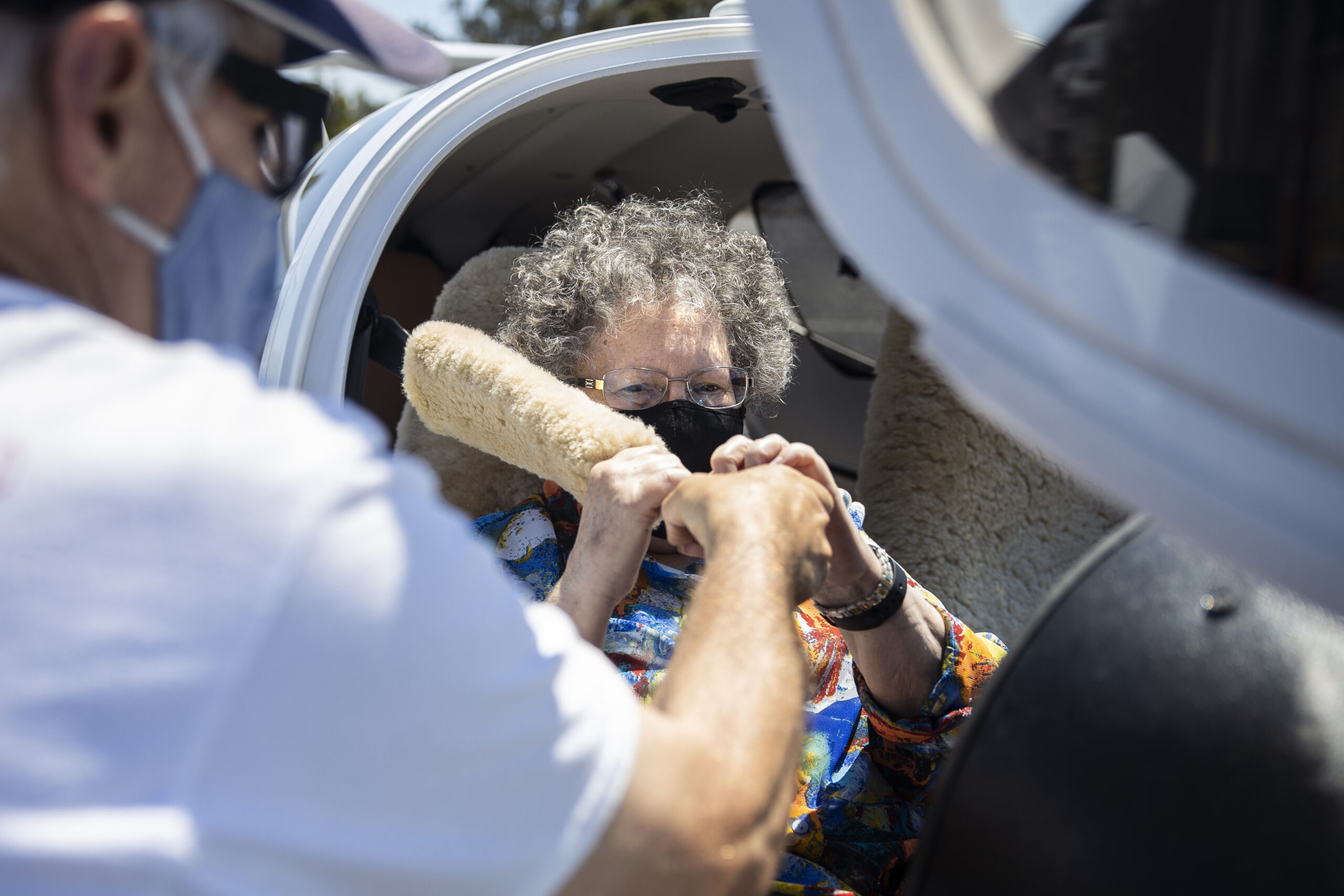 Chris Bennett helps Eileen Ambrosini with her seatbelt at Castle Airport in Merced. Photos and Video by Martin do Nascimento.

Chris Bennett helps Eileen Ambrosini with her seatbelt at Castle Airport in Merced. Photos and Video by Martin do Nascimento.

Eileen Ambrosini moved to the small town of Atwater, California, in 1979. Over the next three decades she met her husband, raised her daughter, and worked as a high school French teacher, all in the heart of the state’s agricultural corridor.

But when Ambrosini was diagnosed with breast cancer in 2005, the town’s rural location and lack of specialized medical services left her no option but to drive upwards of six hours every Friday to receive treatment and counseling at Stanford Hospital in Palo Alto.

“I was so exhausted after a while that I literally could not get out of bed on Saturday,” says Ambrosini. “I don’t know how long I could have continued to do that. It was just taking too much from the energy that I didn’t have.”

One day, Ambrosini overheard a fellow patient at the hospital talking about how they got to treatment every week — a nonprofit organization of volunteer pilots called Angel Flight West.

“The fundamental value that Angel Flight [West] offers is the ability to connect people in remote areas with advanced medical treatment,” says Chris Bennett, a volunteer pilot with the organization. For the past four years, Bennett has regularly flown Ambrosini to and from treatment.

Bennett got his pilot’s certificate shortly after retiring from a career in tech and immediately decided to start volunteering to infuse his personal love of flying with the purpose of helping others.

“It’s a very centering, grounding experience that allows me to combine a bunch of things that I enjoy all mixed together,” he says.

The American Hospital Association (AHA) estimates that transportation challenges prevent 3.6 million Americans from receiving medical care each year. Of those cases, the Air Care Alliance estimates that 25,000 public benefit flights, such as those operated by Angel Flight West, take place every year in the United States.

“It’s the best of all possible worlds,” says Ambrosini, “because I live in a very peaceful area, but then I know every Friday […] or whenever it is I need to get back to Palo Alto, it’s the ten minutes to the Air Force base, and that’s [all of] my driving.”

by Martin do Nascimento, California Health Report
May 27, 2021