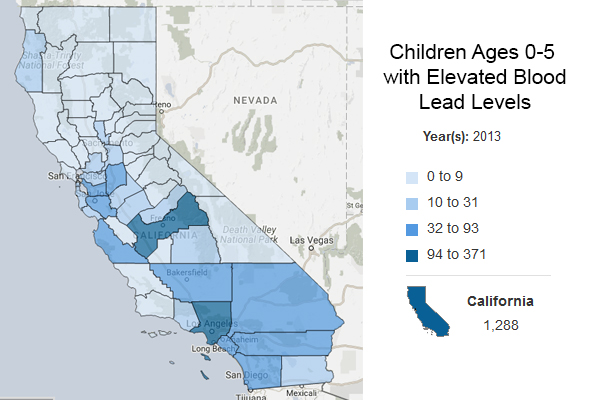 The number of children with lead poisoning in California declined steadily between 2007 and 2013, a sign that state reforms and prevention efforts may be working.

In 2007, 3,846 children and adults under 21 had elevated blood levels statewide, according to data from the California Department of Public Health. By 2013, that number had fallen to 1,427. The vast majority of those exposed are children under 6.

Some areas of the state reported higher exposure levels. In 2013, Fresno and Los Angeles counties had the greatest number of residents under 21 exposed to lead. There were 100 people with elevated blood levels in Fresno County that year, and 425 in Los Angeles County.

Two rural areas, Mono and Siskiyou counties, had the highest percentage of people under 21 exposed to lead in 2013. In Mono County, 2.1 percent of residents in that age group had elevated blood levels that year. In Siskiyou County, the percentage was 1.2 percent.

Because young children are more likely to put objects in their mouths and because they typically have more contact with the floor and soil, they are most likely to be exposed to lead, researchers say. Contaminated soil and dust, as well as paint from before 1978, can be sources of lead exposure.

According to the U.S. Department of Housing and Urban Development, the population most affected by lead exposure nationwide are children in low-income families living in old homes or apartments with heavy concentrations of lead-based paint, reporter Linda Childers wrote in a February story.

Lead exposure can interfere with children’s growth and cause hearing and learning disabilities, behavioral problems and hyperactivity, according to Kidsdata.

Residents can test for lead using kits from home improvement stores or by calling a state lead certified inspector, Childers wrote. Many counties have grants available for lead repair work. Those who are concerned about potentially having lead in their older house or apartment but can’t afford to do testing or make repairs should contact their local city or county public health department.