A Mother Lost Her Son to an Overdose, and Went on a Mission to Flood Orange County with Naloxone 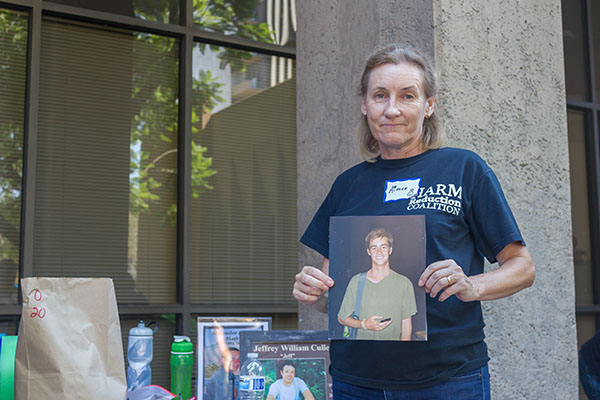 Every Saturday afternoon, Aimee Dunkle stands behind Santa Ana’s City Hall with a framed picture of her son, Ben, as she hands out brown paper bags filled with kits of the opioid overdose-blocking drug Naloxone—a medication she says will save the lives of hundreds, if not thousands, of Orange County residents.

As Dunkle worked on a recent Saturday, a woman approached her with tears in her eyes.

“I just wanted to say thank you,” she said, explaining that the Naloxone she got three weeks ago saved her son from overdose. “If it wasn’t for that stuff he’d be dead.”

Another man shuffled towards her, his head hung low, and asked  not for Naloxone, but for encouragement before he turns himself in to jail the next day. He has seen Dunkle every Saturday for the past year-and-a-half, and through her training, he has used Naloxone to revive ten people after overdose.

Dunkle embraced him, saying, “I care, right—you know I care.”

As co-founder of the Solace Foundation, Orange County’s only Naloxone distribution program, Dunkle operates alongside the OC Needle Exchange steps away from the county’s largest homeless encampment—whose population exceeded 400 last year—in hopes of reaching some of the area’s most vulnerable drug users at a time when the number of fatal opioid overdoses is soaring in Orange County and across the country.

“If we can saturate Orange County with Naloxone, we will see a huge reduction in deaths,” she said. “We just want to keep people well and alive until they’re ready to get help. We don’t want to judge.”

Dunkle started the Solace Foundation in 2015, three years after her own son, Ben, died of a heroin overdose when he was 20 years old.

According to Dunkle, Ben was first exposed to opioids through prescription pain pills following a skateboarding accident when he was 13.

In 2012 he sought help at an in-patient treatment facility, but less than two months into the program, he walked out against medical advice. That next day, he overdosed on heroin and died in the back of his friend’s car.

At the time, Dunkle hadn’t yet heard about Naloxone.

“When I found out about Naloxone, I knew that the three people who were with Ben, if they had Naloxone, they would have used it,” she said. “My son didn’t have to die.”

So Dunkle turned her attention to those whose lives she could save, and made it her goal to flood Naloxone throughout Orange County, where drug overdose deaths spiked 88 percent between 2000 and 2015, according to the OC Healthcare Agency. In 2015, 228 people died from opioid overdoses.

“I was left with a choice,” she said. “I could do something in his honor.”

As he explained, Naloxone—also known by the brand name Narcan—works by latching onto a person’s opioid receptors, dislodging any opioids that were already there, and blocking any more from attaching.

“The practical effect is like all the opioids in the system just disappear,” said Davidson. “It’s really fast, and it’s really effective.” Plus, he added, the drug has no ill effects for non-opioid users, so if Naloxone is administered in error, it’s not harmful.

It’s also simple to use. While the drug can be injected intravenously with a syringe, newer models include a nasal spray—similar to Flonase, said Davidson—and a pocket-sized auto-injector with voice guidance.

One of his own studies examined all 58 counties in California, comparing the death rates of those with Naloxone distribution programs to those without.

“The counties that have them have lower death rates than the ones that didn’t have them,” he said. “That’s reasonably convincing that if you put this stuff in the community, it has a measurable effect on deaths.”

Both Dunkle and Davidson acknowledge that Naloxone is only scratching the surface of the country’s opioid epidemic, since it doesn’t address addiction or its underlying causes. But they insist it’s a vital first step until long-term solutions are developed.

“It’s not solving the problem,” said Dunkle. “The problem remains and we have to address that, but I believe in keeping them alive until we can do more.”

Dunkle began by working with local treatment centers and sober living homes, and last year, she partnered with the OC Needle Exchange as a way to reach active drug users—most of whom are homeless—a method she says saves the most lives.

“The number of reversals just skyrocketed,” she said, noting that she has distributed 4,500 Naloxone kits and has taken more than 900 reversal reports in the past year-and-a-half. On average, she hands out about 70 kits per week.

Kyle Barbour, a founding member of the OC Needle Exchange, said that Dunkle’s work has allowed vulnerable communities to get resources they otherwise wouldn’t.

“This population is at extremely high risk for overdose, yet the services that are intended to protect them aren’t willing or able to adequately serve their needs,” he said, explaining that many homeless heroin users don’t feel safe going to the emergency room and fear prosecution if they call 911.

“So providing Naloxone to this population means they now have the means to protect themselves and the people that they love, and it’s incredibly powerful for them.”

While the Solace Foundation remains Orange County’s only Naloxone distribution program, Dunkle said that changes are coming slowly to the county.

As part of the California Department of Public Health’s Naloxone Grant Program, the Orange County Healthcare Agency will be providing the Solace Foundation more than 3,000 boxes of nasal Narcan, enough to last one year, according to Dunkle.

She has also received requests for collaboration, including from Chapman University.

“It’s like having an AED,” he said, referring to automated external defibrillators. “We’re not having a heart attack epidemic, but we have an AED in every building. Why? Because if you run into a situation where it happens, it’s better to have it.”

In the future, Dunkle also hopes to work inside the jails, so that individuals are trained to use Naloxone upon release, a time of increased risk for overdose, she said.

While Dunkle is encouraged to see her influence grow and so many organizations reach out—“I go wherever I’m invited,” she said—her passion remains with the homeless men and women she spends every Saturday afternoon with.

“When you train, it takes time and dialogue, so friendships develop,” she said. “These people, who live on the streets, they’re used to being treated with such disdain and disrespect. So when you give them this medication that could possibly save their life, it’s a beautiful opportunity.”

A Mother Lost Her Son to an Overdose, and Went on a Mission to Flood Orange County with Naloxone