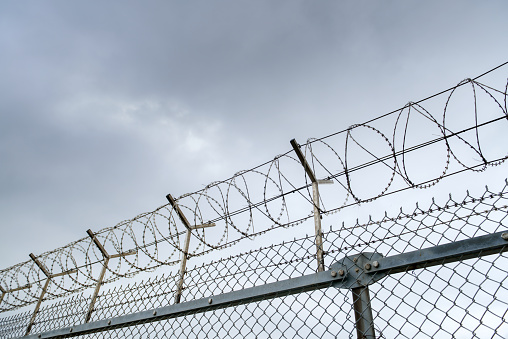 Bryan Hirayama, an assistant professor at Bakersfield Community College, made a little bit of history this year. He became one of the first community college professors to teach inside a California state prison in roughly the last 20 years.

Hirayama’s communications course at Kern Valley State Prison last spring led the way for hundreds of courses being planned by community colleges across the state as a result of Senate Bill 1391, signed into law last September.

It allows community colleges both state funding and prison access to teach inmates face-to-face. Previously all community college courses had to be open to the public – a rule that made such classes impractical. The new law waives that requirement for prisons.

Forty years ago every California state prison had professors coming in person to teach courses to inmates. But cuts to both prison education budgets and community college funding and the elimination of federal Pell Grants for inmates whittled in-person college programs down to one, a volunteer-based program at San Quentin State Prison in Marin County, near San Francisco.

So for the last several decades California prisons have been forced to rely on teaching inmates in isolation, with outdated and ineffective distance delivery methods.

Now colleges and prisons are forging ahead with on-site instructors, and inmates at facilities like Kern Valley, Pelican Bay and Solano state prisons are lining up for classes.

Hirayama said when his class finally received their books they had to read four chapters.

“Twenty-eight out of 28 did it, every single one of them. And they asked me very specific and very informed questions,” he said.

“The students taking these courses are highly motivated and invested in seeing these programs succeed,” said Leslie Minor, vice president of academic affairs for Solano Community College in Fairfield.

Colleges are focusing on sociology, general studies, psychology and business, said Brant Choate, superintendent of the Office of Correctional Education for the California Department of Corrections and Rehabilitation (CDCR).

“Many inmates are interested in becoming substance abuse counselors or social workers,” he said. And community colleges are excited to partner with CDCR’s Career Technical Education program, which has 18 trades and 500 classrooms and shops for welding, plumbing, electrical and more, Choate said.

Justifying the cost
Hirayama acknowledges it may be difficult for people to support spending state tax dollars on programs for inmates when many young people, who have done everything right, struggle to pay for college.

“Despite your reservations about it, it’s the right thing to do,” he said.

“What is the alternative?” asked Choate. “Since 95 percent of California’s prison population will eventually return to our communities, it is our duty to the public to provide all of the rehabilitation possible. Today’s inmate is tomorrow’s neighbor,” he said.

A 2012 report by a Princeton University researcher on the Prison University Project at San Quentin states that only 17 percent of graduates from the program committed new offenses or violated their parole after release. That’s compared to 65 percent of people released from California prisons as a whole.

The program started in 1996, and now professors and graduate students from Stanford University, UC Davis and Berkley campuses among others volunteer to teach there.

Jody Lewen, executive director of The Prison University Project, said having the interaction of teachers in prisons helps break down misconceptions about inmates.

“We imagine people in prison as animals …and that there is no common ground between us, but the students are phenomenal,” she said. “They couldn’t be more motivated and grateful. It’s what college should be: adults who have chosen freely and are passionate about learning.”

With enrollment down at community colleges across California, the new law provides a welcome source of funding allowing them to be fully reimbursed for in-person courses at state prisons, and they are aggressively marketing to prisons, Minor said.

The law calls for CDCR and the California Community College Chancellor’s Office to sign an agreement to expand access to courses that can help inmates earn degrees, certifications for jobs or transfers to four-year colleges.

“We’re trying to figure out what’s most sustainable and scalable so we can help other colleges,” said Chris McCullough, Dean of Curriculum Instruction for the Chancellor’s Office.

Pelican Bay is working on an agreement with College of the Redwoods to offer face-to-face courses for inmates in the fall or winter, and more than 100 inmates are interested, said Janice Adele Nelson, Supervisor of Correctional Education Programs at Pelican Bay. Currently the prison is conducting a college “boot camp” offering inmates remedial math, pre-algebra, language arts and study skills to prepare them.

Lewen has similar concerns. She’s very excited about the prospect of community colleges coming into prisons but worries that there are no binding mechanisms for quality control.

“If schools are not held accountable, and are allowed to create low-quality programs that are unresponsive to both the academic and the psycho-social needs of students, it could be a disaster and it would be impossible to get rid of them,” she said.

But Choate said CDCR will have some say in what’s provided.

“The memorandum of understanding we develop with each college ensures quality control,” he said.

And he and McCullough stressed there will be a major emphasis on face-to face instruction.

Training instructors to teach in prison will be another challenge.

“If you’re going in with fear you shouldn’t do this,” said Pat Smith, a professor of criminology at Bakersfield Community College, who will be training instructors.

Teachers can’t wear the same color as inmates in case there’s an incident and guards need to distinguish them. No cell phones or laptops are allowed, only golf pencils and lined paper since pen casings can be used to make tattoo guns.

Despite all the precautions, teaching in prison is probably no riskier than driving on the freeway, Smith said. Inmates view instructors as allies, people giving them hope and transition skills for reentering the world, she said.

“It gets them away from the prison politics, gives them a breather from the violence and the gangs. I think they would probably protect the instructor,” Smith said.

Hirayama saw that first hand. When it came time for his class to deliver their initial speeches, one student, who had concerned Hirayama given his tattoos and demeanor, delivered a speech about a very personal and “taboo” topic. He’d never talked about it out loud to anyone before.

“After he delivered that speech he was one of the greatest allies in my class,” Hirayama said. “He was the first to volunteer, he calmed down conversations, and he became an exemplary student from that point forward.”