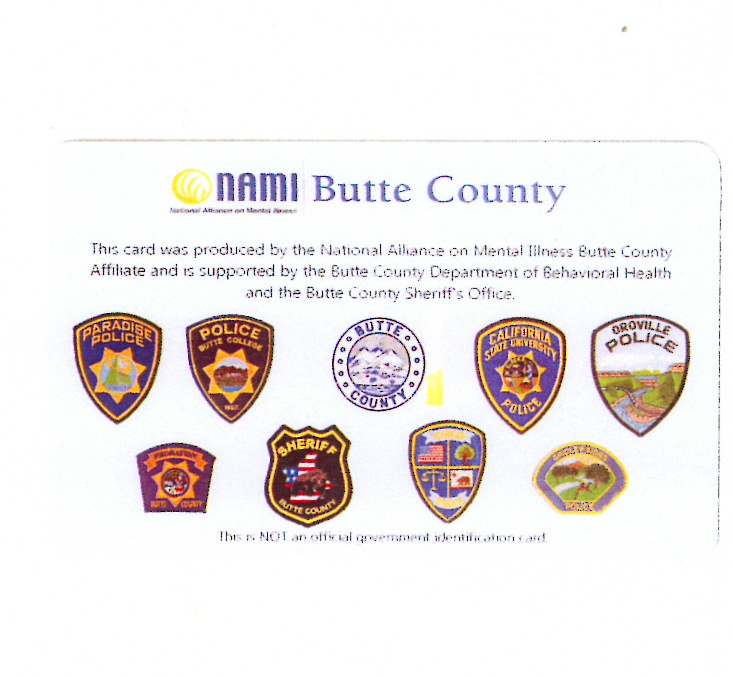 When law enforcement and people experiencing a mental health crisis intersect, it’s often not clear to either of them what they are dealing with or how to proceed. A new program in Butte County seeks to make those encounters safer for everyone.

The Butte County affiliate of the National Alliance on Mental Illness (NAMI) and local law enforcement are offering cards to consumers of mental health services that can contain any information the consumer feels would be important for a first responder to have. That may include their diagnosis, emotional triggers and emergency contacts.

The back of the card carries the emblems of local law enforcement agencies that support it.

“It invites the officer to step out of an enforcement mode and into a public service mode,” said Andy Duch, a captain at the Butte County Sheriff’s Office.

“When mentally ill people are approached by law enforcement, just like anyone else, they get incredibly anxious,” said Jason Tate, program manager for the Iversen Wellness and Recovery Center in Chico. “Anxiety and fear can lead to a more challenging time.”

And symptoms of mental illness can appear to police as drug abuse. A manic episode, for instance, can look like methamphetamine use and slurred speech can often be mistaken for drunkenness, Tate said. So a white card explaining unusual behavior may change the interaction with a police officer.

A successful pilot project with cardboard cards was done three years ago. So in April NAMI Butte County started rolling out more substantial plastic ones. Close to 100 have been distributed, said Cathy Gurney, president of NAMI Butte County.

Some leaders in the mental health community fear the cards will increase stigmatization of the mentally ill, painting them as incapable of speaking for themselves or even dangerous.

Duch and Gurney anticipate it having the opposite effect. They liken the card to a medic alert bracelet.

“It legitimizes their crisis,” Duch said.

“And it opens up a whole new line of conversation,” Gurney said.

No record is made of who gets a card or what’s on it. The consumer dictates the information to the person producing the card which can even be issued blank with just the law enforcement emblems on the back.

Shannon Patterson got one for safety reasons. She has bipolar depression and has been homeless for three months. A doctor prescribed her medication that caused her to become deeply depressed. When police took her to a social service department for help she was turned away because she was homeless and staff thought she just wanted shelter, she said.

The next day she attempted suicide. She had to be resuscitated three times, spent 10 days in the hospital and still suffers hand tremors from the overdose.

“The system really failed me,’’ she said. So when the white card program emerged she decided to get one.

“I felt it would be better for me to have that,” she said.

The card lists her name, diagnosis and triggers, such as confinement and loud noises. It also lists numbers for her mental health provider and emergency contacts and her medical conditions including multiple knee and back surgeries and a heart murmur.

She’s hoping the card would legitimize her medical conditions to staff if she ever had to seek help at an emergency room.

James Freeland, who is staying in a Chico homeless shelter with his wife after their house burned down, said he thinks the card is a great idea. He has paranoid schizophrenia and post traumatic stress disorder.
“I’ve been in prison most of my life and this card shows that there are issues on top of issues,” he said.

NAMI Butte County is gradually rolling out the program, wanting it to spread by word of mouth, Gurney said. Her organization will print cards for clients of the Iversen Wellness & Recovery Center in Chico every two weeks and cards will also be printed at the Torres Community Shelter in Chico and the Butte County Behavioral Health Department. The City of San Diego has also expressed interest, Gurney said.

So far the cards have been well received. The Iversen Wellness and Recovery Center has had about 35 people opt to get one.

Tate hasn’t spoken to anyone who has used a card with law enforcement yet but said his members seem to really like having them and he has not heard any negative opinions.

But the cards aren’t for everyone. Corey Chambers is staying at the Torres Community Shelter in Chico while he pursues an internship in the solar industry. He has friends with white cards but does not intend to get one himself. He’s been homeless since May and takes Zoloft for depression. He’s afraid of being classified as mentally ill and thinks the card may add to the stigma he already suffers as a result of being homeless.

“I’m trying to stay as functional as I can,” he said.

Leaders in the mental health community have similar concerns.

“The white card initiative, while well intentioned, is extremely problematic,” said Leah Harris, director of the National Coalition for Mental Health Recovery. “It borders on psychiatric profiling, and also reinforces the assumption of dangerousness,” she said.

“It creates a picture of someone who is so out of their mind they don’t know where they are,” she said. “Suddenly someone might go from being a PhD at Johns Hopkins to a psych patient who can’t speak for themselves.”

She contends that people with mental illness are already afraid to call for help when they have a physical health problem for fear they will be shipped off to a psychiatric hospital, she said.

“If [responders] see psych meds in their possession it invalidates them,” she said.

Instead of white cards Harris would rather see more mobile crisis teams with peer support specialists and clinicians who can de-escalate situations and connect people with the appropriate care.

Efforts in that direction are underway as well, said Gurney. NAMI California, the California Highway Patrol and the Behavioral Health Directors Association held a summit in November. They are discussing the possibility of standardizing Crisis Intervention Training for law enforcement across the state to improve interactions between police and those living with mental illness.

For now Patterson feels a little safer carrying a white card to help her navigate any potential confrontations with law enforcement or county health services in the future.