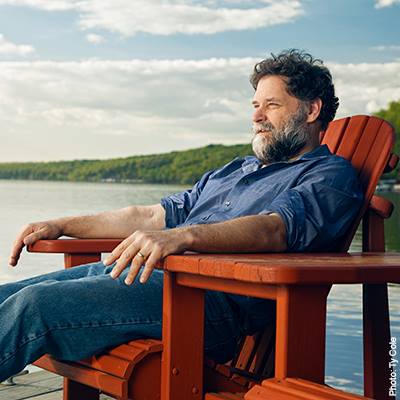 Dr. Bill Thomas has a Christmas present for you.

You’re not going to live to be 200. You’re probably not even going to make it to 100 either. All that longevity talk is marketing fantasy intended to line the pockets of “anti-aging experts.”

Instead, he’s got something better.

Your older years are going to be brilliant. You’ll embrace the wisdom gleaned from a lifetime of sorrow and joy. You’ll be fearless, maybe even ferocious.

What’s more, you’ll stop lying to yourself. You won’t “age in place” in your home as most seniors claim they want, but you’ll live in a tight-knit community of like-minded souls who will enhance your mind, body and spirit. You’ll become a revered elder. You’ll be surrounded by plants and animals, the whole environment geared toward respecting the experiences of aging, perhaps even within a community of children.

In fact, Bill Thomas says almost everything we think we know about aging is wrong.

“We have a very impoverished and hilariously inept understanding of aging,” he insists, beginning with the human life span.

“The maximum human life span has not increased by even a single day,” writes Thomas in his brilliant, sprawling meditation on aging “Second Wind: Navigating the Passage to a Slower, Deeper, and More Connec ted Life.” “In fact, the Romans who had the good luck to survive infancy and adulthood typically experienced a life span equal to ours today – without the benefit of modern science.”

At 55, Thomas is one of country’s most thoughtful – and cheeky – aging experts with an impressive list of revolutionary accomplishments.

To address the plagues of boredom, helplessness and loneliness in long-term care facilities, in the early 1990s Thomas and his wife developed The Eden Alternative to encourage the infusion of pets, nature, children, laughter, and meaningful activities. Today there are Eden-inspired facilities throughout the USA and Europe as well as Canada, Australia, and Japan.

Discouraged by existing housing alternatives for older adults, in 2005 Thomas then invited a handful of progressive colleagues to his family’s Summer Hill Farm in upstate New York to brainstorm new housing possibilities.

“We just invited people from around the country to come and be with us and talk through an alternative to ‘aging in place.’”

The result: The Green House Project. Over 160 Green House facilities nationwide (and an equal number in development) now feature large communal areas with high ceilings, natural light, and exposed kitchens where the same staff members – who are also caretakers – cook for residents. Love and a respect for elders underpin every activity and facility design.

Thomas says the popular belief that older adults prefer to remain in their homes as they age is simply a reflection of the poor alternatives available to them.

“It’s largely a fantasy that soothes our fear of institutionalization,” he says. “When people are terrified by something, they create in their minds an idealized alternative.”

A Harvard Medical School-trained physician, he’s spent his professional life tearing down the walls of elder isolation, being called one of the 12 most influential Americans to redefine aging by the Wall Street Journal.

In “Second Wind” Thomas describes the intense post-World War II social pressures between conservative “squares” heralding productive citizens as icons of a new society, and the “hippies” who envisioned a world fueled by harmony, equality, kindness, and collaboration.

The paradox of the modern world, he says, is simple: It provides stability and affluence for older adults, then utterly rejects their experiences and wisdom.

“This dominant vision of aging – of worthy but inoffensive elders – really robs aging of a tremendous amount of power,” he says. “In this ‘milquetoast’ version of aging, older people become the very definition of inoffensive. They’re vanilla. They’re plain. They’re unexceptional.”
Thomas divides attitudes about aging into three groups, including Denialists who reject the aging process, and Realists who take their vitamins and exercise.

But Thomas hopes his own tribe of Enthusiasts will redefine the aging process in far more positive ways.

“Enthusiasts gleefully violate the dominant understandings of age,” he writes. “The Enthusiast subculture remains… a small, underground movement, in large part because it embraces aging in ways that Denialists and Realists find almost impossible to believe.”

Meanwhile, Thomas decries the common perception that valued elders are only those with exceptional accomplishments – like running a marathon.

Instead, he implores us to view the simple act of aging as societies have for centuries – with appreciation, respect, and dignity.

“Other people living in other places and in other times have understood quite clearly that adulthood is just one phase of life,” writes Thomas. “They understood that as the end of human adulthood drew near, a person could begin to explore the passage that leads out of the constrained life of the adult and into a new way of living.”

One of those Enthusiasts at Thomas’ farm a decade ago was Janice Blanchard, who heads the Denver-based consulting firm Aging Better Together.

“Bill reframes this life stage within the context of the human life span, offering a new narrative that builds on the experience, wisdom and potential of later life,” she says, “not in spite of many years lived, but because of them.”

The principles guiding both The Green House Project and the Eden Alternative are rooted in a deep sense of community, equality, sustainability, social activity, inclusivity, and engagement. They also foster a holistic commitment to mind, body and spirit.

Not surprisingly, these dovetail with those of the Woodstock Generation – minus the hallucinogenic drugs — spurred by the famed 1969 music festival located just 120 miles from Thomas’ former farm.

“Communal living is a source of strength,” he insists. “Bringing people together who are not related by blood and creating a feeling of safety and belonging is not just Woodstock, but a distinctly human capacity.”

A conversation with Thomas is a joyous rollercoaster ride around aging, a series of poignant observations punctuated with bursts of annoyance then lilting, sing-song kudos for the rebels who are changing the future – all of which he chronicles in his blog ChangingAging.org.

Thomas retains his most acute distaste for the billion-dollar global anti-aging industry.

“They prey upon the fear of aging,” he snipes. “They are merchants of fear, actually.”

Thomas takes special delight in skewering the anti-aging industry and one of its earliest proponents, New Age guru Deepak Chopra who scored a best-seller with his book “Ageless Body, Timeless Mind: The Quantum Alternative to Growing Old.”

What has Thomas got against living to 100?

“There are people who live into their 80’s who are not making the best use of that time, and they’re going to live another 50 years?” he scoffs. “I actually find it much more interesting to dig in and say ‘How do we help people make the very best of what they have?’ When that happens, then you can talk to me about more years.”

Today, the Baby Boom generation is redefining aging, and will bring with it the same social pressures it did during the countercultural revolution that introduced new attitudes about war, sex and race.

Thomas’ fiercely utopian vision for the future: A Shangi-La for older adults.

“It is a place where elders hold their heads high, where age functions as a virtue that is capable of great and wondrous things, where the slings and arrows of ageism fall harmlessly to the ground,” writes Thomas.

And these same Baby Boomers, he adds, will spark yet another rebellion.

“There will be a war – an age war – like nothing we have ever seen before.”