Native American Tribes Have the Right, but Not the Resources, to Prosecute Abusers 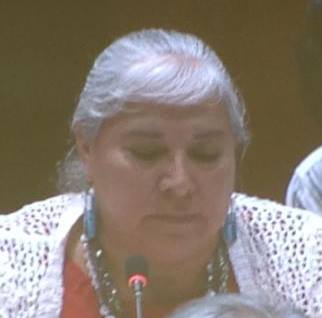 Native American women face a 2 in 5 chance of experiencing some form of intimate partner violence in their lifetime. In most of these cases – 86 percent – the perpetrator of the violence will be non-Native.

These statistics, based on federal data, reflect a rate of violence against Native American women far greater than that experienced by any other ethnic group in the U.S. Those higher rates, advocates say, are in part the result of laws that bar tribal courts from prosecuting non-native offenders on Indian reservations. Instead, federal or state courts are responsible for such prosecutions, but some tribal leaders and advocates maintain that these investigations are often low priority for the agencies handling them.

“Those offenders knew they could come on tribal land, batter the women, and they didn’t have to be held accountable — which made the stats of Indian women being abused be so high,” said Lynda Smallenberger, executive director of the Kene Me-Mu Family Healing Center located in California’s central valley.

But beginning next year, there could be some legal reprieve under new federal rules directed at curbing violence against Native women. Nearly two decades after its original enactment, the Violence Against Women Act (VAWA) was reauthorized in 2013 to include special provisions aimed at reducing domestic violence on tribal lands.

“Hopefully, in the future, we’ll see the number declining with assaults and battery against Indian women go down because of this,” Smallenberger said, “because now tribes can hold those people accountable.”

Federally recognized tribes in the United States have rights to establish separate criminal justice systems because they are sovereign nations. Currently, only Native Americans can be tried in tribal court and usually only for misdemeanors or civil matters. Because of the changes in VAWA, however, tribes will be able to prosecute non-Indian offenders for the first time in certain domestic violence cases, beginning in March 2015. The crime must have occurred on tribal land, and the defendant must have a “sufficient tie” to the reservation, such as living or working there, according to the U.S. Department of Justice.

The special jurisdiction does not apply to other acts of violence against Native women, including sexual assault. Native American women have a 1 in 3 chance of being raped in their lifetime.

Many assaults are never reported to police and therefore not reflected in crime statistics, says Germaine Omish-Guachena, executive director of the Strong Hearted Native Women’s Coalition, a sexual assault and domestic violence advocacy group based in San Diego County. Although under-reporting is pervasive across cases of violence against women from all backgrounds, Omish-Guachena says there are additional impediments for Native women seeking safety and justice.

“Even working within San Diego County — where we have the highest amount of reservations in the whole country — we still have barriers that we run into with law enforcement, the courts, and other agencies working with Native people,” Omish-Guachena said. Omish-Guachena says she has witnessed a general lack of “culturally sensitive services to protect women.” And she says that even for those who do report, many of their cases never see the inside of a courtroom due to inadequate investigations, lack of evidence and plea-bargaining.

Omish-Guachena understands the reluctance to report. “Sometimes I wonder, if I was a victim of domestic violence or sexual assault right now, would I even call?” said Omish-Guachena, herself a member of the Rincon Band of Luiseño Indians. She added that she would have to report it, based on her principles. Still, she said, “even with all the contacts I know, and what I know doing this work, it’s really hard to put myself in their place and say yes, I would do that.”

Confusion about which agency is responsible for investigating domestic violence cases may also hamper reporting of the crime. In most parts of the country, the federal government currently handles such cases, as it has jurisdiction over “major” or felony crimes and crimes involving non-Indians. Tribal courts typically can only handle misdemeanor crimes committed by tribal citizens.

However, in a handful of states, including California, a policy enacted in 1953 — known as Public Law 280 — transferred the authority from the federal government to the states.

The result, according to reports from the Tribal Law and Policy Institute and others, has been continual confusion over jurisdiction and impediments to tribes’ ability to establish criminal justice systems.

Technically, the state of California and the tribes have what’s called “concurrent jurisdiction” over crimes occurring on tribal land. But in reality, there are few tribes in California actually exercising that jurisdiction.

Another consequence of exchanging federal authority for state authority has been a lack of federal funding for tribal justice systems in Public Law 280 states, according to Carole Goldberg, vice chancellor of UCLA’s School of Law. The result has been an ongoing conundrum for the tribes in California — they are denied funding because they generally don’t exercise criminal jurisdiction; they can’t exercise criminal jurisdiction because they don’t have the resources.

“There is a very considerable disparity of funding. And for tribal courts in California, by the Department of the Interior, it’s zero,” said Goldberg, who also served as a President Obama-appointee on the 2010 Indian Law and Order Commission.

Among the recommendations of the Commission, she says, was equal funding for all tribes to include basic levels for courts and policing, regardless of jurisdictional policies.

“If you’re going to have criminal jurisdiction, you need resources,” Goldberg said — not only to pay for investigations and prosecutions, but also for to ensure due process protections for defendants. “So until we have the resources and criminal jurisdiction exercised over anyone, we can’t begin talking about making use of VAWA 2013.”

In theory, the new provisions under VAWA could be an important boost for tribal justice systems.

“[When] non-Indians see themselves as largely outside the control of the most local government — namely the tribe — you have the distinct possibility of people feeling there’s very little likelihood that they will be held to account for violent behavior,” Goldberg said.

At least one tribe in California plans to take control of domestic violence cases under VAWA.

Juana Majel-Dixon, who serves on the traditional legislative council for the Pauma Tribe in southern California, confirmed that her tribe is planning to adopt special jurisdiction over non-Indians next year.

Majel-Dixon, who also chairs a task force to end violence against women with the National Congress of American Indians, explains it’s important for the tribes to be empowered to handle domestic violence matters internally.

“The responsibility of the federal government is to prevent the encroachment of these types of crimes, these acts of violence against Indian Country and our people,” she continued. “By turning a blind eye and not offering the adequate funding and services, they’re giving permission for these acts of violence to occur, by doing nothing.”

When Pauma brings charges in its first criminal domestic violence cases, they will be prosecuted in the Inter-Tribal Court of Southern California, which serves a consortium of about a dozen tribes in the area.

Currently, the court handles a few hundred cases each month — all of them civil matters, according to the court administrator, Temet Aguilar.

Aguilar says he doesn’t expect the caseload will immediately become much larger following Pauma’s implementation of special jurisdiction. Still, he says, the court is ready.

“I know that our system is prepared to take on Indian or non-Indian defendants,” said Aguilar, who is also a Pauma tribal councilmember. “Whether they’re enrolled or not enrolled — those little loopholes people try to get through, we’re closing those loopholes.”

In the nine years since the court was established, Aguilar says they’ve secured judges and lawyers that meet or exceed state standards. He is confident in the court’s ability to do its job. Still, Aguilar said, the stakes are higher in the realm of criminal law.

“One of the fears I’ve had — if we do this, we have to do it right,” Aguilar said. “This is not civil; civil is money and materials. This is lives — these are people; this is freedom.”

Native American Tribes Have the Right, but Not the Resources, to Prosecute Abusers